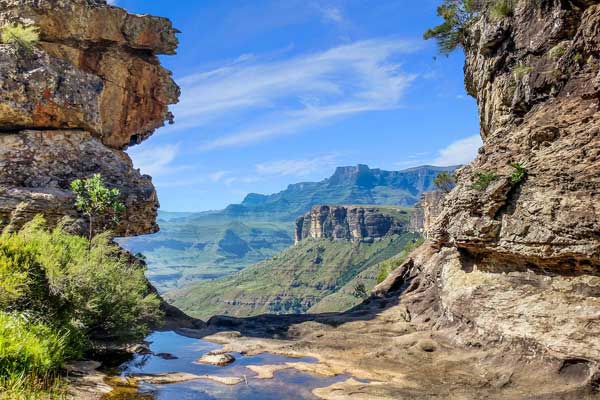 The Drakensberg Mountain Range is found in South Africa and Lesotho and is the highest mountain range in southern Africa reaching an elevation of 3,482 meters. The Drakensberg forms the eastern section of the Great Escarpment which borders the Central Plateau of Southern Africa.

Thanks to its unique formation and distinctive structure, the range's name translates to Dragon's Mountains in Afrikaans and Barrier Of Spears in Zulu.

In this guide you will find everything you need to know about the Drakensberg Mountain Range, including some of its notable hikes and mountains.

Area: Eastern part of the Great Escarpment mountain range in Southern Africa
Highest point: Thabana Ntlenyanam, situated in Lesotho and is the highest point in southern Africa at 3,482m

For millions of years the elements have sculpted the Drakensberg Mountains into what they are today. While many mountains are the result of a shift in tectonic plates along the Earth's surface, the Drakensberg escarpment is actually the product of erosion.

The original African Plateau was cut down by wind and water over millennia. Thus creating the interesting formations of the Drakensberg.

The lower layers of the mountain range consist of sandstone, which is the deposit of a great lake that once dominated southern Africa. A thick layer of basalt caps the range. This results in the distinctive steep cliffs and pinnacles of the Drakensberg.

The Drakensberg Mountains are one of two mountain ranges to have resulted from this interesting geological process, making it a truly extraordinary formation.

It extends North from the Eastern Province, winding its way into the Limpopo Province and Mokopane - where it is known as the Strypoort Mountains.

The Drakensberg is generally defined by three regions: the Northern, Central and Southern Regions. There are many deep valleys and peaks with spectacular mountain views throughout the range.

The altitude and elevation of the Drakensberg Mountain Range and the surrounding area results in moderate summer conditions. However, in the valleys of the mountain range, temperatures can get quite hot and regularly exceed 86˚F (30˚C).

The summer season is from December to February. Because of its location, the Drakensberg also lies within South Africa's summer rainfall area.

Thunderstorms and rain showers are daily occurrences during these warm months and can last for several days or even an entire week. Sleet and hail are also common weather conditions that accompany the storms.

Thundershowers are generally preceded by a fluffy cloud  accumulation at a high altitude in the morning. This will turn into a fully developed storm by midday.

Winter in the Drakensberg is from June to August and brings dry weather and pleasantly warm days. The days usually reach temperatures above  68˚F (20˚C). But the nights can get extremely cold, especially at the higher altitudes, and can drop to well below 32˚F (0˚C).

Snow often caps the higher reaches and peaks of the Drakensberg Mountains in the winter months. It may even last through summer if the conditions are right. Blizzards sometimes occur during the winter months and last for about three days, resulting in very dangerous conditions for hikers.

Autumn (March to May) and Spring (September to November) have the most pleasant climatic conditions with little rain and moderate temperatures. These seasons are generally regarded as the best time for hiking the Drakensberg.

The high reaches of the Drakensberg Mountains have been described as being an "alti-montane grasslands and woodlands" eco-region. The steep slopes and far distance from the equator result in a cooler climate along the lower reaches for various habitats to exist in.

The Drakensberg Mountains have rich and diverse plant life. Many threatened plant species and 119 globally endangered species are found growing along the various sections of the range.

The majority of the vegetation found at higher altitudes on the Drakensberg consists of tussock grass, small shrubs, Fynbos, and creeping plants. The lower slopes are mostly grassland with some conifers, which are not commonly found in Africa. These grassy slopes are also home to many endemic plant species.

While the Drakensberg Mountain Range isn't known for its wildlife, there are some animals to look out for. The mountains are home to 299 bird species, 24 snake species (including 2 highly venomous ones), and  48 mammal species.

The Drakensberg Mountains are rich in birdlife, with many different species occurring in the area. The mountains are an ideal breeding spot for bearded vultures with over 200 pairs found in the Drakensberg National Park. Lesser Kestrels and Cape Vultures are both endangered species which can be spotted in the range.

The Northern Drakensberg region is one of the most popular tourist destinations within the range as it includes the highest reaches of the mountains. The region includes the uKhahlamba Drakensberg Park (a World Heritage Site), which encompasses the Golden Gate National Park and the Royal Natal National Park.

Some popular destinations within the Northern Drakensberg are Tugela Falls, which is the second highest waterfall in the world, and the Amphitheatre, which is regarded as one of the most impressive cliff faces on the planet.

The Northern Drakensberg Mountains also feature thousands of Bushmen rock paintings. These rock paintings are incredibly diverse in subject matter and give us a glimpse of what life was like for the San people. 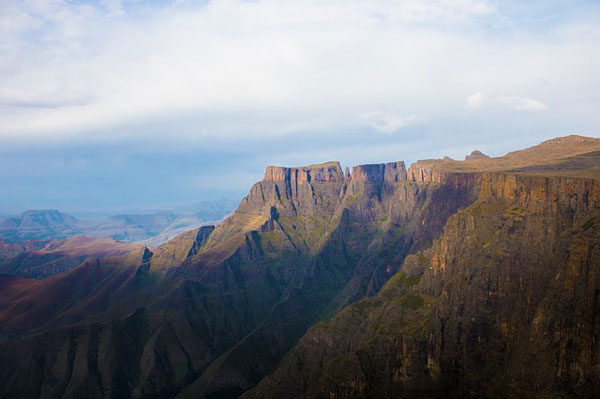 A large portion of the uKhahlamba Drakensberg Park is formed by the Central Drakensberg region. There are several prominent peaks in this region, including Giant's Castle, Cathkin Peak and Champagne Peak, all of which sit over 3,000 meters above sea level.

Cathedral Peak is one of the most famous spots in the Drakensberg Range and is a great area for hiking and seeing the rock art. The Central Drakensberg region has some of the most stunning scenery found within the mountain range.

The Southern Drakensberg are the mountain sections from Bushmen's Nek to Kamberg. Several towns are located within this region, including Underberg, Bulwer and Himeville.

The most notable highlight in this region is the thrilling Sani Pass that winds its way up an elevation of  1,332 vertical meters to reach its peak at 2,876 meters above sea level. The breathtaking pass is the only road to link Lesotho and KwaZulu-Natal.

Because of its unique geological formation, the Drakensberg Mountain Range consists of many peaks and valleys that have formed as a result of erosion of the years. Here are some of the most notable and popular peaks within the range. 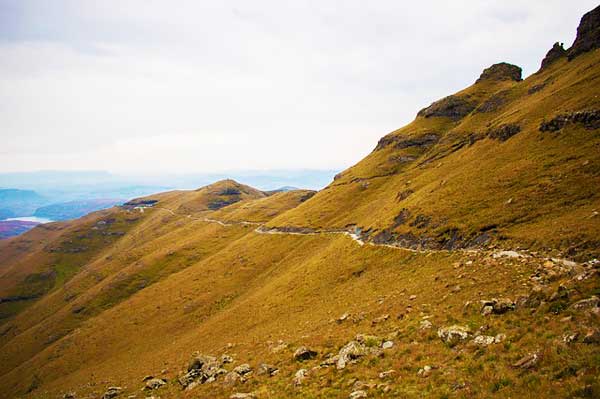 Thabana Ntlenya is the highest point of the Drakensberg Mountain Range, at 3,482 meters, and its name translates to "beautiful little mountain" in Sesotho. This peak is found in the Maloti Mountains, which are situated in the highlands of Lesotho and form part of the Drakensberg range.

Giant's Castle is a peak which summits at 3,315 meters above sea level. It is a popular area for hikers and offers incredible views. The peak is situated in the Giant's Castle Game Reserve toward the southern end of the Central Drakensberg region. 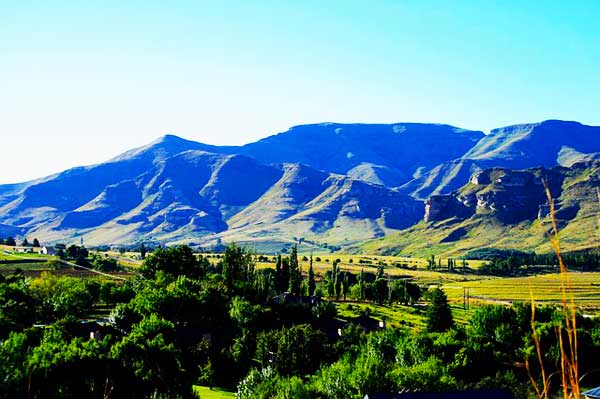 Cathedral Peak is a free standing mountain within the Drakensburg range and has an elevation of 3,004 meters. It is known by the locals as Mponjwana, which translates to "Little Horn". Cathedral Peak is located within Cathedral Ridge, which stands off from the main mountain range at a right angle.

D.W. Bassett-Smith and R.G. Kingdon were the first people to climb the peak in 1917. 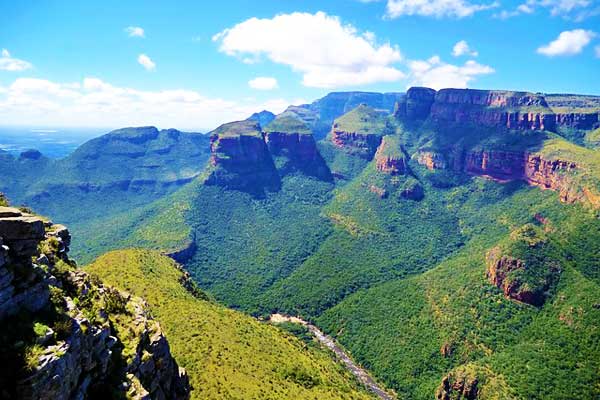 Champagne Castle is the second highest mountain in South Africa at 3,377 meters. It consists of several notable peaks, including Cathkin Peak, Monk's Cowl, Sterkhorn and Dragon's Back.

Champagne Castle is said to have gotten its name when two mountaineers wanted to celebrate their climb up Cathkin Peak by popping open a bottle of champagne. However, their guide dropped the bottle onto a rock thereby christening Champagne Castle. 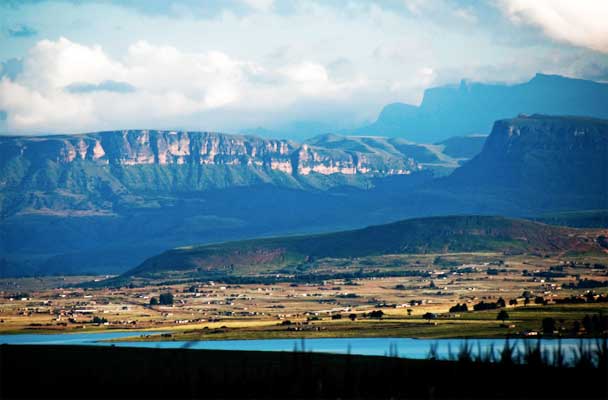 Mafadi is a peak at 3,450 meters above sea level and is situated along the border between Lesotho and South Africa. It is the highest point in the country of South Africa.

The peak's name is under dispute as its original Sesotho name Ntheledi, which means "makes me slip", is thought to be more suitable and relevant as it refers to a nearby stream. Whereas Mafadi means "Mother of Fadi". 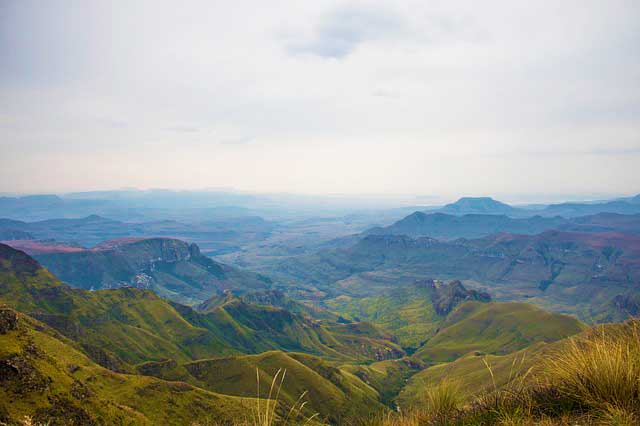 Spion Kop is one of the smaller mountains that make up the Drakensberg Range as it only reaches 1,460 meters above sea level. However, its historical significance makes it one of the more notable mountains in the range.

The Battle of Spion Kop took place on top of this mountain during the Boer Wars where the Boers were victorious against British forces in 1900.

Notable Hikes in the Drankensberg

With 1,000km of mountain to explore, the Drakensberg offers some of the greatest hiking opportunities in southern Africa. Whether you're an experienced hiker or just starting out, the Drakensberg provides hikes suitable for everyone.

There are many amazing spots to explore and unique features to see in the Drakensberg, so here are some of the most notable hikes that should be at the top of your list to climb. 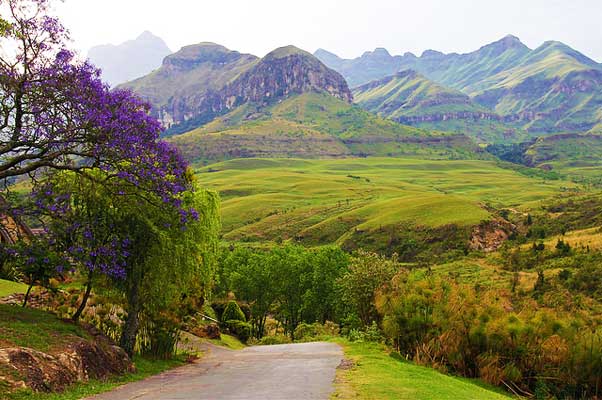 Cathedral Peak is a very popular spot for hikers  as it is one of the more distinctive mountains within the range. It is quite a long and challenging hike, so beginners are advised to take a guide. The trail takes you on a strenuous uphill journey along zigzagging paths, past a small waterfall, and up a steep rocky gully.

The summit offers spectacular views overlooking the mountainous land and is well worth the effort of the climb. 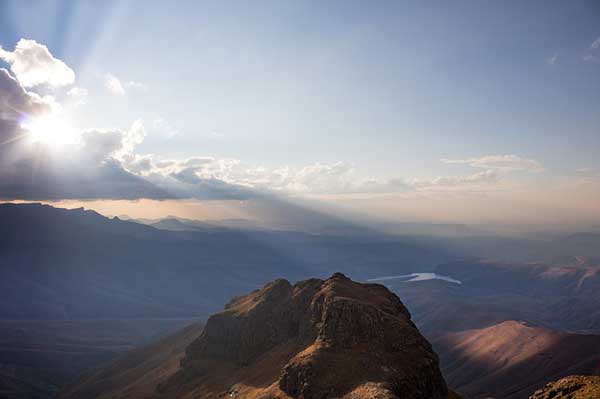 Rainbow Gorge is a scenic hike in the Cathedral Peak area. The hike is easy to moderate and takes about 5 hours. The trail leads you through the scenic landscape into the gorge where you will pass through forest and see some picturesque rock pools and waterfalls. When the light hits the spray of the waterfalls just right, rainbows appear and create a magical space within the mountains. 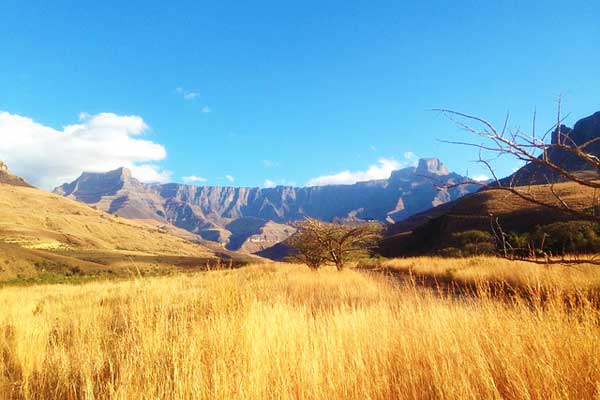 If you're looking for some of the best views that the Drakensberg has to offer, then the Amphitheatre is the spot for you. This hike is recommended for experienced hikers as it is very challenging. Climbing directly up the almost vertical rock face on chain ladders is the best way to get to the top and is an exhilarating experience. 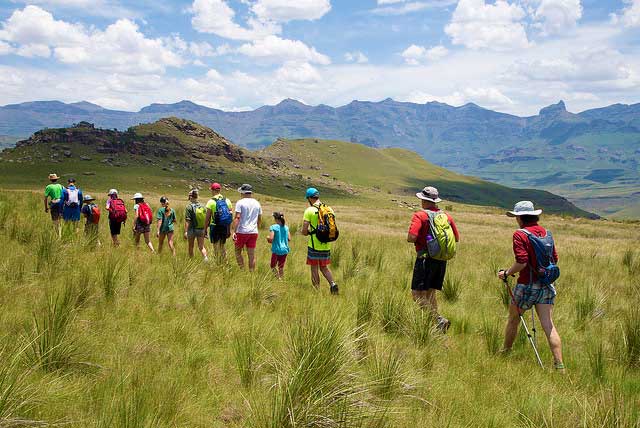 The Giant's Cup hiking trail is one of the most well known hikes in the Drakensberg. It is a well marked, multi-day hike that takes you from Sani Pass to Bushman's Nek.

The Giant's Cup Trail leads you through the foothills of the Drakensberg. Therefore it isn't considered as strenuous as the hikes through the higher reaches of the mountains.

If you plan to hike in the Drakensberg Mountains, make sure that you are adequately insured for up to 4,000m. We recommend World Nomads. Use the calculator below to get a quick quote. 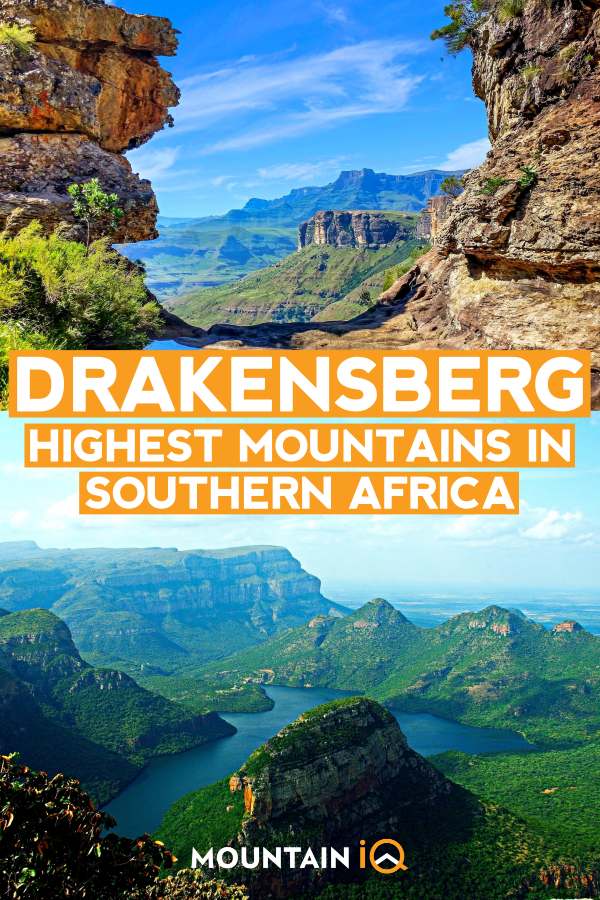