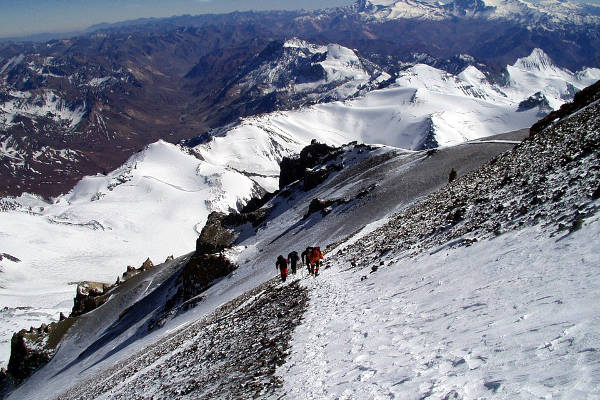 Welcome to our guide to Climb Aconcagua!

Our aim at Mountain IQ is to provide our readers with free information and useful advice to help you get ready for an incredible experience in the mountains.

The goal to Climb Aconcagua is a fantastic one and an incredibly rewarding experience.

Preparation is now the key to your success on the mountain.

Below we have provided a summary of useful information that you will want to read before you go. These are our most frequently asked questions. Where appropriate we have provided links to more in depth guidance articles within the Aconcagua section of our site.

Standing at 22,837 feet, Aconcagua is the tallest mountain in the Western Hemisphere. The mountain, which is part of the Andes, is located in western Argentina, near the border of Chile.

The first recorded ascent of Aconcagua was made on January 14th, 1897, by Swiss guide Matthias Zurbriggen via the northern route. The guide was part of a team led by Edward FitzGerald who attempted the mountain 8 times but never reached the top. The east side of the mountain was first successfully climbed in 1934 when a Polish team reached the summit on March 9th. The route is now known as the Polish Traverse route.

Nowadays, Aconcagua is one of the most popular mountains in South America to climb and every year an average of 3,500 people attempt to reach the summit. Aconcagua’s popularity stems from the fact that it is considered to be one of the easiest climbing peaks for its height. In fact, Aconcagua is often referred to as a highest ‘trekking peak’ in the world.

Aconcagua is part of the iconic 7 summits circuit and nearly all the greatest climbers in history have stood atop its peak. Because of height and relative ease, Aconcagua is often used a warm up climb for some of the more difficult peaks like Everest or Denali.

Whilst the main routes are not technically difficult to climb, the sheer altitude of the mountain makes the climb very tough and, every year, two thirds of people attempting the mountain never reach the summit. Although the main routes are technically easy, there are many routes to the summit that are extremely difficult and multiple deaths occur on Aconcagua every year. The lower reaches of the mountain are notoriously dry and dusty whilst the top 1,000 meters or so are frequently covered in ice and snow. Crampons and ice axes are sometimes needed depending on the weather and route.

If you are planning to climb Aconcagua, do not let the high altitude and low success rates deter you. Preparation is the key! With the right preparation you’ll be standing atop the Americas tallest mountain in no time. We have seen many types of people summit Aconcagua and a lot of them would surprise you. All that is required is a solid level of fitness, a can do attitude and lots of determination.

This section of the webiste we have provided a comprehensive overview on everything you’ll need to know before you climb Aconcagua. There are a number of routes up Aconcagua. We suggest reading our detailed Aconcagua routes page for more information on each route.

The two most popular routes are the ‘Normal route’ and the ‘Polish Traverse’ route. These two routes actually begin from opposite sides of the mountain and then join up about a 1,000 meters below the summit. Both routes are considered fairly straightforward and require no real technical climbing. Of the two the Normal route is considered easier.

Another popular route is the ‘Polish Glacier’ which is far more difficult and requires considerable amounts of technical climbing skill. Unlike the Polish traverse route which circles around the mountain to join the northwestern approach route, the Polish glacier route simply cuts straight up the east side of the mountain. Ice climbing skills are needed for this route as you’ll be tackling snow and ice slopes between 50 and 70 degrees. Officially, the climbing season on Aconcagua is from November 15th through to March 31st of every year. However, within this climbing season there is the ‘peak’ season which generally runs from mid December to the end of January.

Even from November to March, snow, high winds and ice prevail throughout the upper reaches of the mountain. Temperatures remain cold on the summit all year round and during the climbing season people often get frostbite as temperatures regularly drop to around -30 degrees Celsius. Winds often reach in excess of 50 mph near the summit and dust on the lower reaches can be a real problem.

Storms often hit Aconcagua and the weather can change drastically over a very short period of time. We always recommend keeping an eye on the weather forecast throughout the climb. White outs near the summit are common and many people have got lost on the mountain.

To reduce the risk of these things happening, and to give you the best possible chance of summiting, we always recommend climbing Aconcagua during the high season. If you want more information on the best to climb Aconcagua please see our detailed article here.

How Difficult Is Aconcagua? Aconcagua is famously reputed to be the tallest trekking peak in the world. A climb that requires no ‘technical’ climbing skills. However, this does not mean that Aconcagua is not ‘physically’ difficult.

The sheer altitude of the mountain means that climbing Aconcagua is by no means easy. As noted above, roughly only 40% of climbers actually reach the summit. This percentage has nothing to do with technical difficulty.

Altitude sickness is the major reason why people don’t summit. Altitude sickness can kick in anywhere from 2,500 meters. This means that sickness’s such as Acute Mountain Sickness (AMS), HAPE and HACE are common occurrences on Aconcagua. Proper acclimatization is therefore vital when climbing the mountain.

To give yourself the best chance of climbing Aconcagua you’ll need to have a good level of aerobic fitness. You’ll need good leg strength and be able to deal with extremely cold weather. You’ll most likely have to wear crampons for certain sections and you’ll need to practise wearing these before leaving.

Altitude sickness (aka Acute Mountain Sickness (AMS)) is a real issue when climbing Aconcagua. This is simply because of the high altitude climbers need to go to reach the summit. It is estimated that several thousand trekkers every year turn back because of altitude sickness.

Acute Mountain Sickness is not the only problem, many trekkers often suffer from HAPE or HACE. These are both life threatening illness’s when left untreated.

Therefore, before you climb Aconcagua, it is vital that you understand the risks, symptoms, medications and treatments surrounding altitude sickness. The altitude on Aconcagua should not be taken lightly and proper acclimatization is vital if you are to succeed in climbing the mountain.

Read our guide to altitude sickness and acclimatisation. As noted above, you’ll need a good level of aerobic fitness and leg strength to reach the summit. The trek takes roughly 20 days and you’ll be walking for long hours uphill.

On top of this, the summit is extremely cold and saps your bodies strength very quickly.

We strongly advise setting yourself a training plan at least 6 weeks prior to leaving. This should include a number of aerobic exercise, strength training and long hikes.

See our page on training and preparing to climb Aconcagua. To help you prepare we have provided a comprehensive gear list for your Aconcagua adventure. The packing list for climbing Aconcagua includes a number of essential items. Some of these items be rented or purchased in Mendoza before your climb, however, there are a number of important pieces of gear that we strongly recommend taking with you to Argentina.

This detailed Aconcagua gear list provides you with very useful gear recommendations. We always suggest printing out the gear list to keep with you. The gear we recommend has been tried and tested by countless climbers and will serve you well on any high trekking peak in the region. There are a number of cost factors to consider when climbing Aconcagua, including time of year, tour operator, gear, permits, visas etc.

Climbing Aconcagua is unfortunately not a particularly cheap activity. The flight alone is generally in the region of US$700 – 1,300 before you even reach the mountain. Depending on how much gear you rent, buy or already own, this can well over US$1,000.

There are loads of tour operators for Aconcagua and plenty of local outfits in Mendoza. Prices for guides varies quite considerably and can be anywhere from US$3,500 to upwards of US$5,000. If you trek without a guide then you can get away with much cheaper.

See our detailed page on Aconcagua permits for more information. Purchasing proper travel insurance is vital when climbing Aconcagua. Many climbing operators will require you to have adequate climbing insurance before attempting the mountain.

The risks of injury on any climb are high and this certainly true on Aconcagua where altitude sickness is a common occurrence. If something were to go wrong you’ll want to know your covered for emergency evacuation and medical expenses. Plenty of people have to be rescued every year on the mountain.

Because of the high altitude you’ll be trekking to, you’ll most likely need to purchase your policy with a dedicated mountain insurance company. Some companies will cover you to high altitude, however, this will be an added extra on the policy clause that you need to confirm. You will also need to confirm how high they cover you to. Did you find this article useful? Please share it! 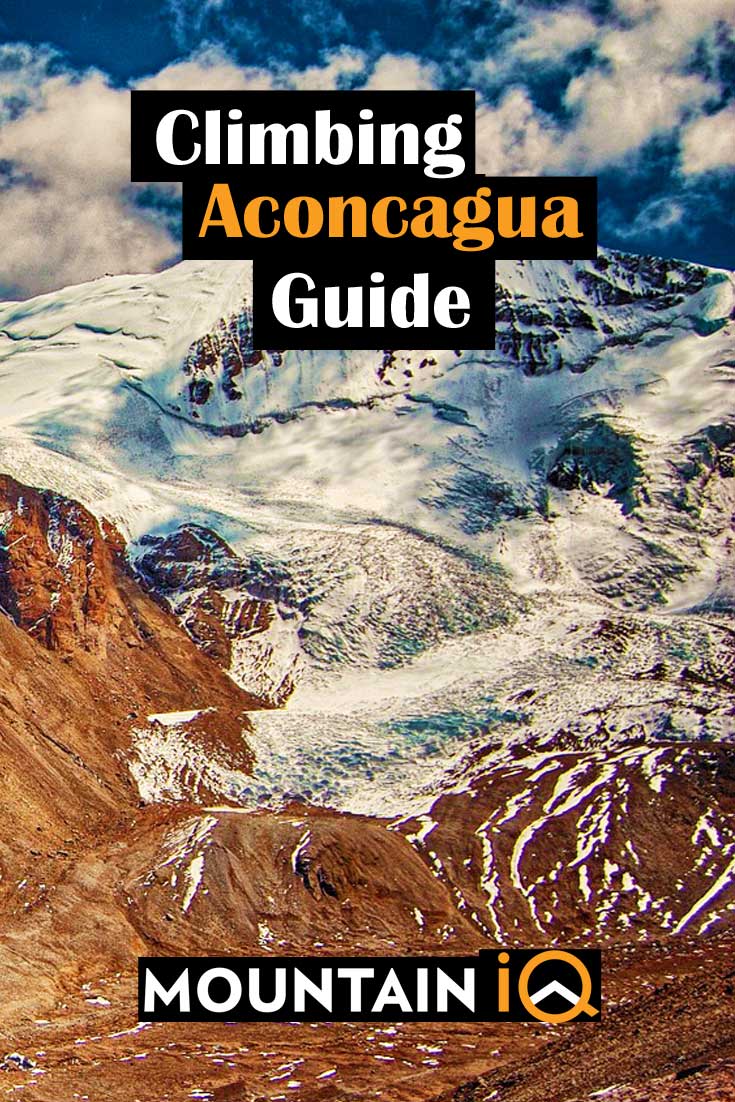