Because Aconcagua is such a large geographic structure, it often creates its own weather.

The climate surrounding Aconcagua is affected by a number of factors including marine currents, winds and orography. Because of this, the weather on Aconcagua can be quite dramatic and fast changing.

To help you prepare for your trip, we have provided an overview of the types of weather and temperatures you can expect on Aconcagua, including the best time to climb.

The climate of Aconcagua is mainly determined by its height and location.

Because of the low pressure system coming off the Pacific Ocean, the Central Argentina Andes and, in particular Aconcagua, receive humid winds from the anticyclone areas in the Pacific Ocean.

This climatic phenomenon known as Zonda wind is very similar to that of the Foehn wind in Europe. The Pacific anticyclone creates warm, humid winds that are sent east towards the Andes. Whilst this wind continues to warm after reaching the Andes, this is not the case when it hits Aconcagua.

Because the mountain is so big, the warm east winds are forced upwards thereby rapidly cooling the wind. By the time it reaches the upper reaches of the mountain, the once warm wind is so cold that it precipitates it humidity in the form of snow. 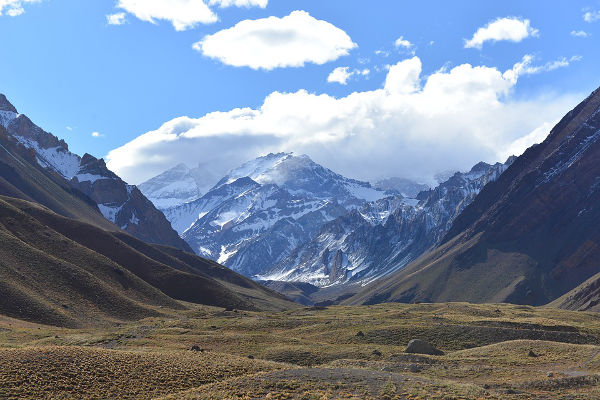 The strong warm winds coming in from the Pacific are the major cause of wind and snow storms on Aconcagua. You must also remember that these storms occur frequently throughout the entire year, not just in winter.

Because of its micro climate, electric storms also exist on Aconcagua. These storms are particularly dangerous and occur only during summer. The entire north-west flank of the mountain is exposed during these electric storms, as is the peak and crests.

There is also another special climatic phenomenon that occurs on the mountain. When very strong winds blow in off the Pacific they often reach the highest parts of Aconcagua (above 5,500 meters). Often when this happens a big mushroom shaped cloud is formed above the summit.

Although the day may be clear, if this occurs you can guarantee there is dangerously strong winds and cold conditions on the summit. All climbers avoid the summit if they see this cloud as trekking into it can often be fatal.

Except for the occasional storms mentioned above, the weather on Aconcagua during summer id completely dry. The warm east winds become dryer as they pass over land and the only precipitation found on Aconcagua is snow. Rainfall in summer is exceedingly rare on Aconcagua.

Whilst rain is uncommon, cold windy conditions are fairly frequent and the weather on the upper reaches of the mountain can change dramatically over very short periods of time. One important consideration on Aconcagua is the wind chill factor which can lower the air temperature by 15 degrees Celsius!

Above 5,000 meters temperatures in the summer will be around -30 degrees Celsius at night. Even on a perfect summers day the summit temperature will often be -20 degrees C. This extreme cold is one reason why there is such a low summit success rate on the mountain. Frost bite is a serious problem and one that needs to be monitored constantly. Proper cold weather gear is required.

The freezing conditions, low humidity and low oxygen means that climbers often compare Aconcagua to 8,000 meter peaks in the Himalayas. Many top climbers use the mountain as a warm up for the taller peaks and a few notable climbers have stated that Aconcagua summit feels colder than that of Everest!

Lower down the mountain at Plaza de Mulas (Base Camp) is warmer. Normally you should be able to walk around Base Camp in shorts and shirt. However, during bad weather periods the temperature can get as low as -20 degrees C. This temperature is common at the higher altitude camps.

The city of Mendoza is much warmer, although still not hot. During the summer months temperatures will often get above 20 degrees C. The temperature is fairly constant during this period with the temperature ranging about 5 degrees from night to day.

Because the weather on Aconcagua is so variable, being able to forecast the weather accurately is vital to climbers.
There is often very short periods of adverse weather on the mountain that come on without warning. However, there are certain ways to minimise weather surprises when climbing.

Firstly, because of the strong easterly winds, it is usually better to forecast the weather from Santiago rather than Mendoza. Lying to the east of the mountain, Santiago will always feel the strong winds first. Therefore, you need keep alert for 3 things:

If you are already on the mountain it is imperative you don’t get caught in any bad storms, blizzards or whiteouts. Luckily, there are some clear indicators as to approaching weather that can be registered from Base Camp.

For a full Aconcagua weather forecast please use these links provided.