Standing high above the Andean mountains is the colossal form of Aconcagua. Part of the Seven Summits, Aconcagua is the tallest mountain in the Americas and one of the most popular trekking mountains in the world. Because of its reputation as the world’s highest ‘trekking peak’, thousands of hikers every year attempt the climb.

However, it is one of the most underestimated mountains in the world and as such has one of the lowest summit success rates. Extreme altitude and temperatures often exceeding -30 degrees Celsius makes Aconcagua a far more difficult mountain to climb than many people initially believe.

There are three main routes up Aconcagua. The most popular and straightforward is the Normal Route. This route takes a direct path up the North West side of the mountain and requires no technical climbing. 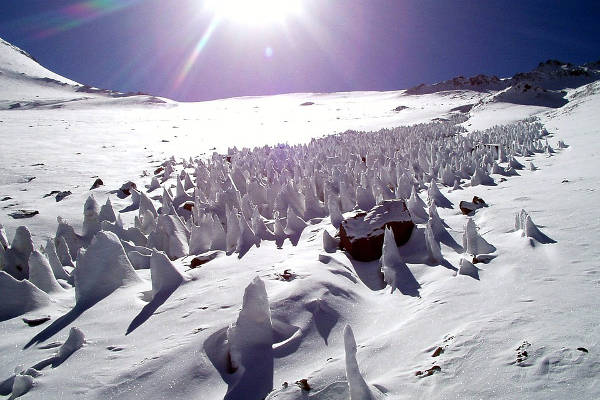 The other two routes begin on the opposite eastern side. The Polish Glacier Traverse route also requires no technical climbing skills, however, the route is 20% longer than the Normal route and passes over steep snow sections.

The third route is known as the Direct route or the Polish Glacier route. This is the most difficult route and requires considerable technical climbing skills. Ropes, ice axes and crampons are needed for much of the route. 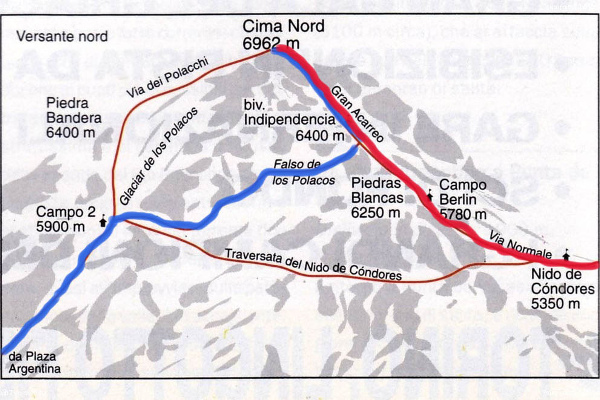 As the map above demonstrates, both Polish routes leave from the eastern side of the mountain whilst the Normal route departs from the opposite. As can be seen, the Polish Traverse route actually joins the Normal route at roughly 1,000 meters below the summit.

Below we look at each route in more detail. 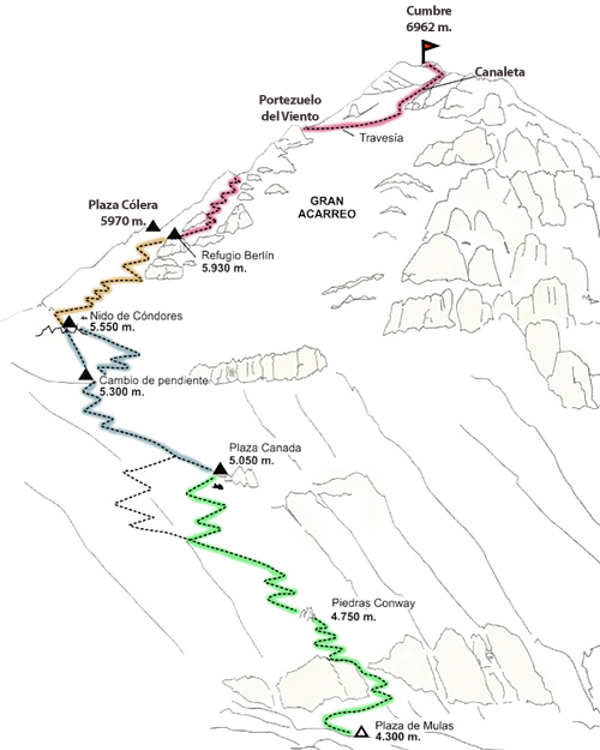 First climbed in 1897 by Matthias Zurbriggen, the Normal route has since become the standard route for most climbers. Although the route requires no technical climbing, it should not be underestimated. The altitude alone makes the trek extremely tough.

The route usually takes 18 days and most climbers attempt the climb in the high season between December and January. Summit temperatures will most likely get below -20 degrees Celsius, even in summer and winds will be in excess often get to 50mph. All these factors make the Normal route quite tough.

Beginning from the Lower Horcones Valley, the Normal route follows the main path leading all the way along to Plaza del Mulas (4260m). This is Base Camp. The landscape on Aconcagua is dry and arid on the lower reaches with little in the way of flora. Higher up there is commonly snow and ice overlaying scree. There are a further 3 high camps after Base Camp.

For a full summary and itinerary, please click here.

The Polish Traverse and Glacier route 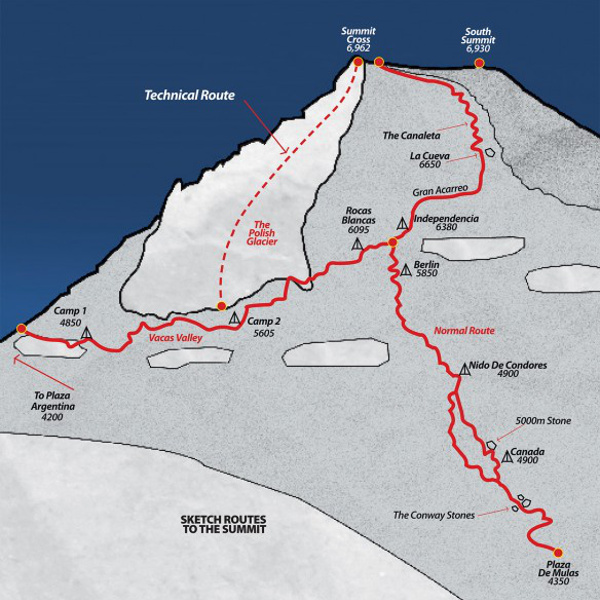 The second most popular route on Aconcagua is the Polish Traverse route. Depending on weather, the route usually takes several more days than the Normal route – roughly 20 days. The route begins on the eastern side of the mountain and slowly traverses around to join the Normal route below the summit.

Although no technical climbing skills are required, the route is slightly more difficult than the Normal route because there it is slightly longer and often encounters more snow along the route. There is a section before the paths join where crampons are required to climb up a 35 degree snow slope. Ropes are generally not needed unless bad weather hits.

You approach the climb from Penetentes. It typically takes about days to reach Base Camp. The trail in is quite scenic and you’ll be required to ford several rivers along the way.  This is often tricky if there has been heavy rainfall.

The route on the mountain contains several scree slopes which you will need to negotiate slowly, however, the majority of the trail is dry and rocky. Higher up the mountain the path becomes icy and you may want to wear crampons for some sections. You join the Normal route just below Independencia Camp at roughly 6,000 meters.

For a full summary and itinerary please see our detailed page here.

By far the most difficult of the three routes, the Direct glacier route requires considerable technical climbing skills. Depending on weather and speed of climbing, the route generally takes in the region of 18 to 20 days. Instead of traversing around the mountain, the Glacier route takes a direct line up the east side over the main Polish Glacier.

Ice climbing is required and only experienced climbers should attempt this route. You’ll need crampons, ice axe and ropes to negotiate the steep glacier. Heavy snow is frequent, as is bad weather. You’ll need to be physically fit as the route is very demanding.

Like the Polish Traverse route, you approach the climb from Penitentes. After you reach Base Camp there is a trail that heads over a small glacier to the base of a large and steep scree slope. The route from Base Camp to Camp 1 and 2 is not a difficult one and you will get excellent views of the Polish Glacier ahead of you.

Once you begin your climb on the Polish Glacier you will need to be careful of hidden crevasses, deep snow and blizzards. Summit day is particularly tough and you’ll be climbing steadily all day. You will need to be prepared to negotiate 60 degree ice slopes narrow gulleys to reach the summit.  Once on the summit ridge it is an easy trek the summit cross.