Aconcagua Difficulty – Can You Do It?

On the Northeast and Normal Routes, there are no walls to climb or crevasses to cross, so technical experience is not required, however there are routes where this is not the case, with the Polish Glacier Direct Route being one of the more technical. 90 percent of climbers take the Normal Route.

Another option is the 360 Traverse Route, which is quieter, more beautiful and longer.

Aconcagua is often referred to as the highest trekking peak in the world. It is fearfully windy, and you should be prepared to wait out bad weather.

The main routes are generally viewed as long walks rather than mountaineering expeditions, but there can be trail-breaking in deep snow or traversing of long sections of hard ice where ice axe and crampons are used.

If you have never partaken of serious climbing, tackling Aconcagua will be the hardest thing you ever accomplished in all your life.

You should have spent a fair few nights outdoors, camped in winter conditions and undertaken multi-day trips carrying a 40-pound pack. You will have to assist guides with the erection of camps.

Aconcagua is a leader in terms of failure and death rates. It is believed to have the highest death rate of any mountain in South America, leading it to be referred to by some as the Mountain of Death.

The most common features of failed expeditions are deviation from the route, changing weather conditions and persistence in the face of exhaustion. Clothing and equipment of high quality can take the edge off the weather.

Danger can be minimised through the use of a professional mountain guide. Registered guides are listed by the Natural Renewable Resources Direction, from whom you obtained your permit.

These guides will be certified by the Provincial School of Mountain and Trekking Guides (EPGAMT) or the Mountain Guides Argentine Association. It takes two years to gain the EPGAMT qualification. Foreign guides are ineligible for certification. 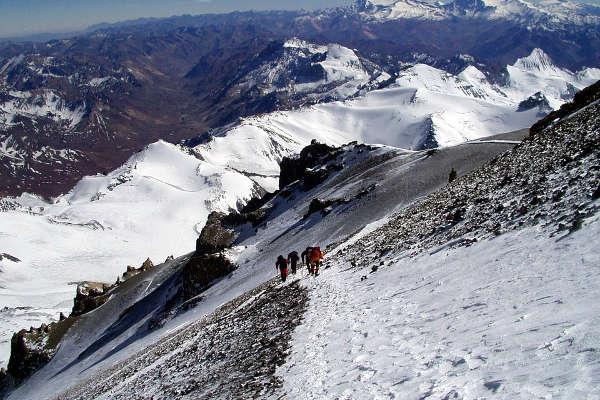 You should train for at least four months before attempting to scale Aconcagua – six months if you are well and truly out-of-shape. You will specifically have to prepare yourself for the altitude and the load you will bear. Eat a balanced diet.

You should be capable of ascending 3,500 feet with a pack of 40 pounds in three hours. Some guides will recommend the six-day mountaineering course run by their employer.

The altitude is the leading cause of problems on Aconcagua. It affects most people. Problems can begin at Los Penitentes, the starting point of this trek. It becomes increasingly difficult to fall asleep the higher you venture.

On Aconcagua, it is all-too-easy to arrive at places that are potentially risky. You will face winds of more than 60mph and temperatures worse than 20 degrees Fahrenheit.

Physical preparation is one factor key to whether you can reach the summit. The other is your choice of trekking company, which is another story altogether. One example is that physical issues are best prevented through early identification, making a more experienced staff member critical.