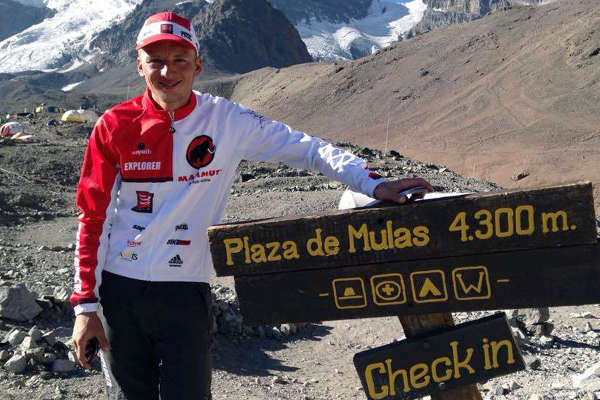 The Ecuadorian mountaineer and runner, Karl Egloff, took 11 hours and 52 minutes compared to Jornet’s 12 hours and 49 minutes. In 2013, Egloff also broke Jornet’s record for Kilimanjaro by over half an hour, but that took him four years.

Aconcagua is higher and more technical than Kilimanjaro.

Jornet’s entered the record books for his action of December 23. News of Egloff’s triumph was posted to his Facebook page on Thursday February 19 2015. The entry for Aconcagua on the French-language version of Wikipedia has been updated, although the English one hasn’t.

Both performed their climbs via the normal route on Aconcagua’s south side, which begins at the trailhead of Horcones. 13,327 feet is ascended vertically over 25 miles.

Egloff spent part of his life in Switzerland, whose citizenship he holds, where he played in minor soccer leagues. He now works as a mountain guide. He also pursues the sports of cycling and swimming.

Beyond Aconcagua and Kilimanjaro, he holds the record for the fastest ascent and descent of Cotopaxi, the second-highest mountain in Ecuador.