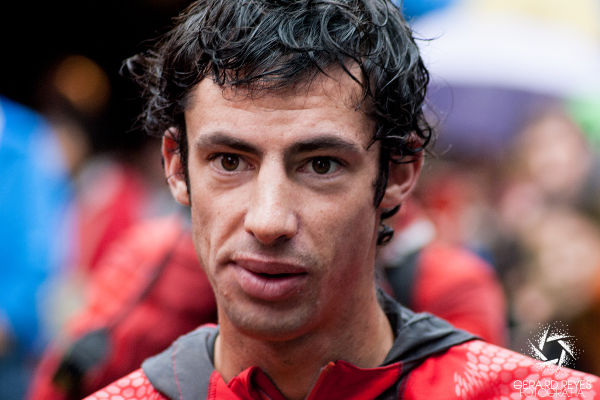 Having made his way up Denali in record time earlier in the year, Kilian Jornet ended 2014 with another record: for Aconcagua (22,841 feet) in Argentina on December 23 2014.

He took 12 hours and 49 minutes in temperatures that were some way below freezing.

Jornet blogged: “I was greatly affected by altitude, especially from 6,500m (21,325 feet) onwards, when I felt my brain was being compressed and I found it difficult to advance.”

In future, he will spend more time acclimatising, although he isn’t one for hanging around. He had assailed the peak previously that same month but turned back a mere 1,500 feet from the summit owing to dangerous 55mph winds.

Aconcagua requires little in the way of climbing expertise, but its altitude and rapidly-changing weather conditions are challenging. It is the highest mountain outside of Asia.

VO2 Max is a measure of the amount of oxygen a person takes in during exertion. A reasonably fit adult male can reach a VO2 Max of 45 to 55 millilitres per kilogram of body weight per minute. When he was in the habit of winning the Tour de France with chemical assistance, Lance Armstrong managed 85.

The undrugged Jornet’s figure is between 85 and 90. Cristian Pizarro, a ranger on Aconcagua who observed Jornet in training, described him as “a monster.”

27-year-old Jornet is a world champion in the realms of ski mountaineering and what is termed sky running: racing by foot across mountainous terrain, sometimes for more than marathon distance and sometimes a short, steep stretch. He was named People’s Choice Adventurer of the Year by National Geographic. He also holds records for the Fastest Known Time for climbing Mont Blanc and the Matterhorn.

Jornet is engaged in a project he embarked upon in 2012 which he named Summits of My Life, the climbing of “the most important mountains on the planet” in record time. He will close 2015 with an attempt upon Mount Everest – or, as is more likely, several attempts.

Jornet has been dating 28-year-old Emelie Forsberg, the women’s sky running world champion, for three years. She also made an attempt upon Aconcagua, but turned back at 19,000 feet. Climbers who had watched films about the pair and read profiles of them requested selfies, although Jornet confessed, “I’m not usually a social person” – his preferred manner of spending time is reading and writing.