Kingdom Of Bhutan Facts And Trivia 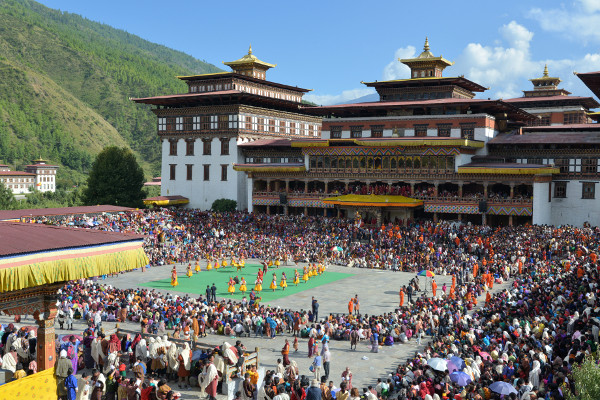 Tucked away deep in the Himalayas, Bhutan is a land lost in time, a mysterious country of peaks, lakes and nomadic lifestyles.

Its isolation however, has tuned the country into one of the most fascinating and mesmerizing places on earth.

Because so few people visit the mountainous kingdom, there is a wealth of amazing facts and trivia that will leave you scratching your head!

Here are our top 20 Bhutan facts

1. ‘Bhutan’ actually means the Land of the Thunder Dragon. This name stems from the enormous thunderstorms that roll in over the country on a regular basis.

2. Bhutan’s capital city, Thimphu, is the only capital city on earth that does not have a single traffic light! The government attempted to install one several years ago, however, there was such an uproar from the locals that the light was quickly abandoned.

4. The government of Bhutan puts environmental policies at the top of its list. Bhutan is the first nation on the planet to have specific constitutional obligations that every man and woman must follow by law. One obligation is that 60% of the nation must be forested at all times.

5. Bhutan is the first and only country in the world to ban the sale of tobacco.

6. Bhutan has a very low median age – just 22.3 years! Over a third of the entire population is under 15 years old!

8. Black-necked cranes are treasured in Bhutan. Anyone caught stealing or harming one could face a lifetime in prison.

9. Only in 1977, did the United Nations recognise Bhutan as a country!

10. Bhutanese manners dictates that you must turn down any offered food. Instead, you should respond with “meshu meshu” whilst covering your mouth. After two or three times of this cycle you are politely allowed to accept.

11. Bhutan is the only country on the planet in which their largest export is renewable energy – go Bhutan!

12. Before 1960, Bhutan had no electricity, roads or postal service!

13. Bhutan’s two national sports are archery and darts. However, the darts are much larger and heavier and the boards are much smaller. The players throw the darts over 20 meters to the board!

15. If you see lots of phalluses on the sides oh houses, don’t panic. Bhutanese culture view phallus paintings as a symbol of good luck and fertility!

16. Bhutanese people all have one annual birthday on New Year’s Day. This is ideal as no one forgets anyone’s birthday!

17. Although a tiny nation, there are over 20 languages spoken in Bhutan!

18. Only in 1974 were tourists first allowed to enter Bhutan.

19. Instead of using GDP as their standard economic scale, the Bhutanese government use a GNH (Gross National Happiness scale). Happiness is measured by the four pillars – Sustainable development, the environmental protection, cultural preservation and good governance.

20. Despite being one of the poorer nations in Asia, Bhutan offers free medical service to everyone, including visitors!

Hiking In Japan – An Overview Of Our Top 7 Hiking Spots

Hiking Mount Fuji – 11 Top Tips And FAQs (From An Expert)