The Himalayas – The Roof Of Our World 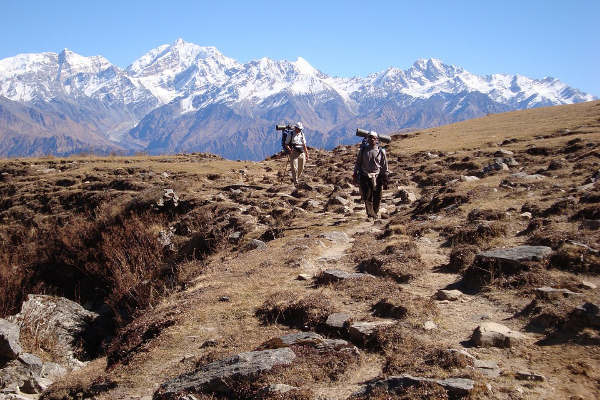 The Himalayas range is home to many of the world’s highest peaks, including the Mount Everest, the highest mountain in the world above sea-level.

This guide will tell you everything you need to know about this famous mountain range in Asia, as well as the most notable Himalayan mountains and hikes.

The Himalayas were formed as a result of ongoing orogeny because of the collision of two continental tectonic plates.

This mountain range has been sculpted by unceasing denudation processes of weathering and erosion.

The mountain-building process is still active and as bedrock is lifted significant stream erosion and gigantic landslides occur.

The belt, which has a length of 2400 m, has the highest rate of uplift at 1 cm/year at Nanga Parbat as well as the highest peak above sea-level (Mount Everest) at 8848 m.

The mountain range is also home to some of the greatest rivers and the highest concentration of glaciers outside of the polar region. It also boasts incredible heights, steep-sided jagged peaks and valleys.

The topography is deeply cut by erosion, resulting in incredible river gorges and a complex geographic structure.

Due to its vast size, huge altitude range and complex topography the Himalayas has a wide range of climates. These climates range from subtropical in the foothills to dry, desert conditions on the Tibetan side of the range.

The areas most characteristic feature is the monsoon, in fact Nepal and Sikkim, India are considered to have 5 seasons as opposed to 4. These seasons are summer, monsoon, autumn (or post-monsoon), winter and spring.

At the lower elevations reaching towards mid-elevation is classified as a humid, subtropical climate with dry winters. As you move higher up the Himalayas have a subtropical highland climate.

Temperatures usually fall by 6.5 degrees Celsius for every 1000 m of elevation gained.

You will experience nearly tropical conditions on the foothills then to the extreme of tundra and permanent snow and ice at the upper reaches.

The fauna and flora of the Himalayas varies widely due to the great differences in climate. The plant and animal life vary with the climate, rainfall, altitude and soils.

These conditions coupled with a very high snow-line support a variety of different plant and animal communities.

The elusive snow-leopard can be found at high altitudes and is the main predator.

Lower down in the forests a number of primates can also be found.

Himalayan plant-life can be broadly classified into 4 types; tropical, sub-tropical, temperate and alpine. Of course, the type of vegetation depends on the elevation and precipitation.

Mountain Regions in the Himalayas

The Himalayas are made up of three parallel ranges; the Great Himalaya, the Lesser Himalaya and the Outer Himalaya. See below for more detailed overview of each region. 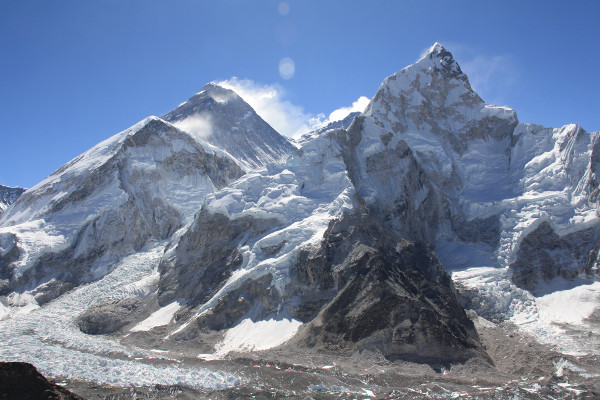 The Greater Himalaya is the highest and northernmost range. It makes up a great line of snowy peaks with an average height exceeding 6,100m.

This range contains the greatest portion of the highest peaks in the world. 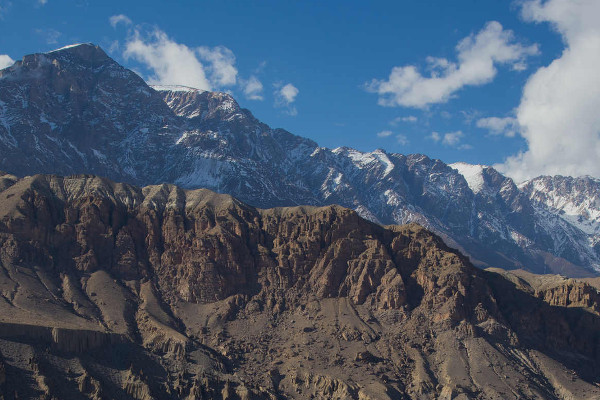 The Lesser Himalaya is the middle section of the Himalaya mountain system. This range extends northwest-southeast across the northern limit of the Indian subcontinent.

The range has an average elevation of 3,700-4,500m above sea-level and includes portions of the western, Kumaun, Nepal and Assam Himalayas ranges. 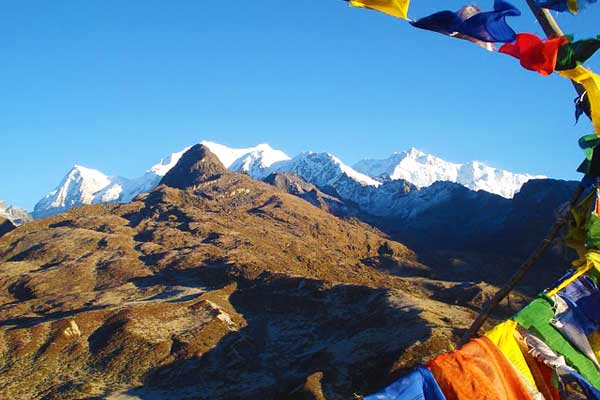 The Outer Himalaya, or the Siwalik Range, extends west-northwestward for more than 1,600km from the Tista River in Sikkim, India and into northern Pakistan.

In some parts the range is only 16km wide and only reaches and elevation of between 900-1,200m above sea-level.

Notable Mountains in the Himalayas

The Himalayan Range has an average elevation of 6,100m. It is home to many of the Earth’s highest peaks, which include over 50 mountains exceeding 7,200m, including 10 of the world’s 14 peaks that are greater than 8,000m above sea-level. 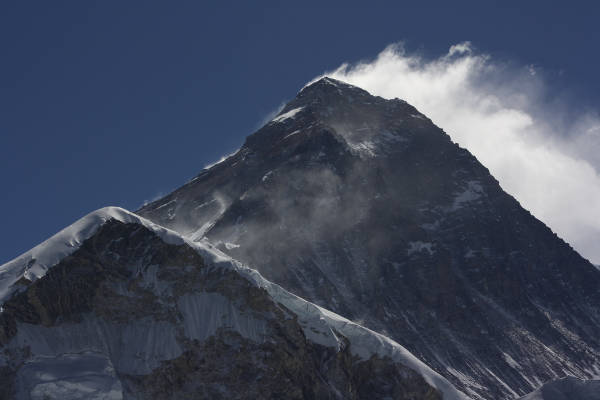 Mount Everest locally known as Chomolungma is perhaps the world’s most famous mountain. At 8,848m above sea-level, it is earth’s highest mountain above sea-level. The international border between Nepal and China runs across its summit point.

It is located in the Mahalangur Himal sub-range of the Himalayas, and it was first summited by the Europeans in 1953. 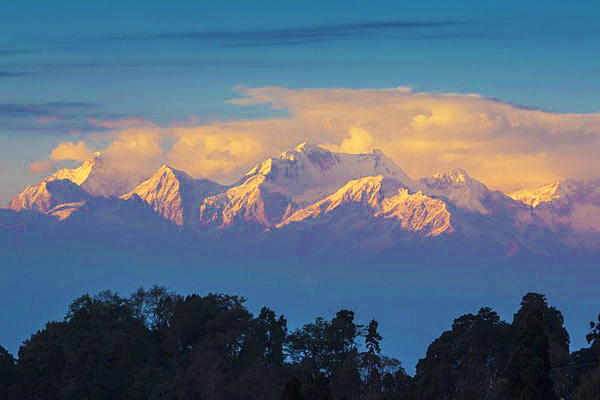 Mount Kanchenjunga is the world’s third highest mountain at 8,586m above sea-level. It lies between Nepal and Sikkim, India. It is also known as “The Five Treasures of the Snows,” because it is blessed with 5 treasures of God. These treasures are gold, silver, gems, grains and holy books.

The mountain was first ascended in 1955. 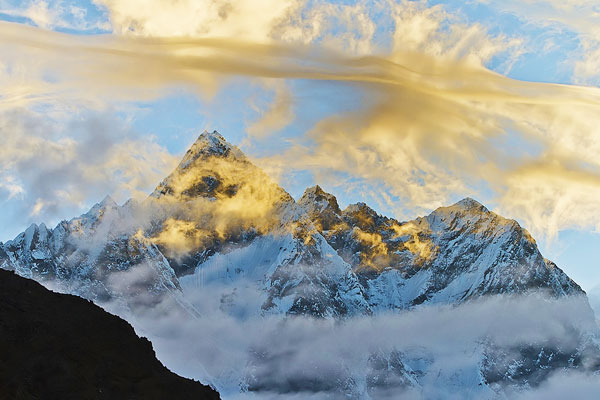 Mount Lhotse which is located on the border of Nepal and Tibet is the fourth highest mountain in the world and is connected to Mount Everest.

The first ascent of the mountain was in 1965, but it is known as one of the deadliest mountains in the world due to many failed attempts and casualties trying to reach its summit. 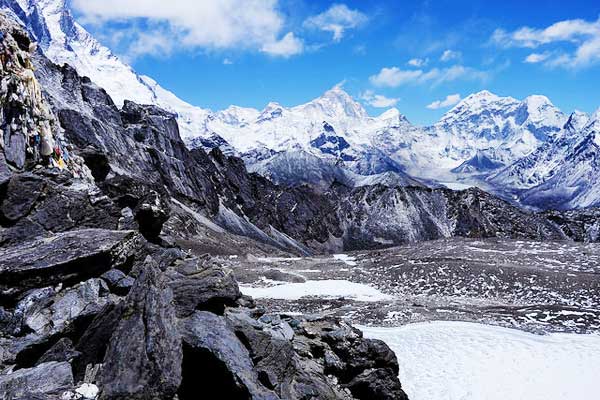 Mount Makalu in Nepal forms a part of the Mahalangur Himalayas. It is an isolated peak and at 8,463m is the fifth highest mountain in the world.

It has a four-sided pyramid shape and was first summited in 1955. 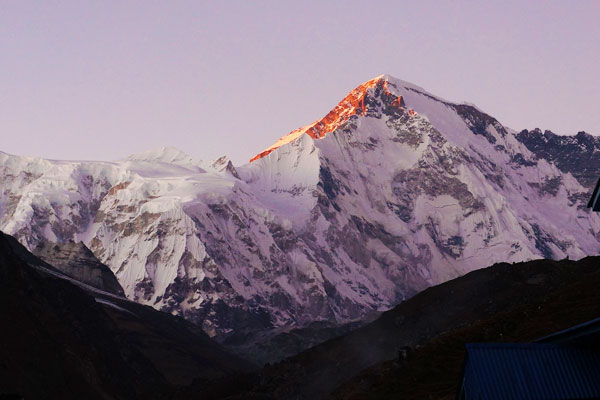 Mount Cho Oyu is the westernmost peak of the Khumbu sub-section of the Mahalangur Himalayas and it lies 20km west of Mount Everest. It is the sixth highest mountain in the world and stands at 8,201m above sea-level.

This peak is known as one of the easiest mountains to climb and was first summitted in 1954.

It is known as the “Turquoise Goddess” in Tibetan. 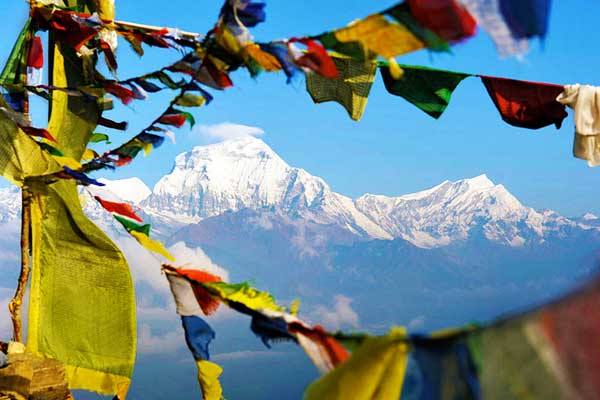 Mount Dhaulagiri is the seventh highest mountain in the world and lie in the north of central Nepal.

It is a popular destination for tourists and climbers and was first climbed in 1960.

The name Dhaulagiri means “White Mountain” and it got this name by being one of the mountains that exceeds 8,000m.

Notable Hikes in the Himalayas

The decision to trek in the Himalayas is by no means an easy one. You will need a very good level of fitness and be very aware of the dangers and symptoms of altitude sickness.

It is recommended that you use a guide as they have ample knowledge of the area as well as first-aid training to keep you as safe as possible on your journey.

The best time to trek is in the months of September and October when the weather is most favorable.

Many Himalayan treks in Nepal, Tibet and Pakistan have established accommodation for trekkers such as hostels, home-stays, tea-houses or hotels. Camping is an option, but it is not the norm.

If you’re looking to experience Mount Everest without having to endure the cost and risk of summiting the highest mountain in the world, the Everest Base Camp Trek is ideal.

This is an all-time favorite trek in the Himalayas and one of the most amazing and picturesque hiking destinations in the world. The trek offers almost continuous views of the tallest peaks in the world and the trail ends at the Everest Base Camp.

The trek is approximately 129km long (round trip) and reaches a maximum elevation of 5364m above sea-level and you can expect to be trekking for around 14-days.

If you have a love for history and dream of trekking the Himalayas, this trek is a fantastic choice for you.

The trek which is between 10-18 days long and has a distance of 29km-89km, is truly like traveling back in time.

You will experience the desert beauty as well as the ancient Tibetan cultures of Nepal.

The highlights of the trek are the ancient “Forbidden City” and the ancient monasteries and caves.

Very few tourists trek this route and a special permit is needed to enter the area. 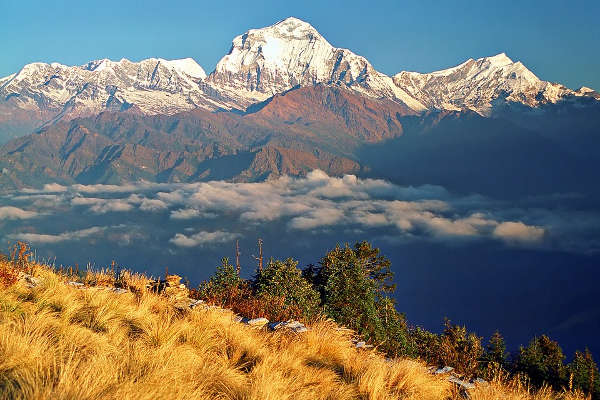 The Annapurna Circuit Trek is certainly popular, with over 40000 trekkers visiting from around the world. It is one of the oldest Himalayan Treks and was first opened to foreigners in the late 1970’s.

This trek follows an ancient Himalayan Trade route and should take between 8-25 days to complete, with the average completion time being 14-days.

The route is 206km (round trip) long and reaches a maximum elevation of 5416m above sea-level. 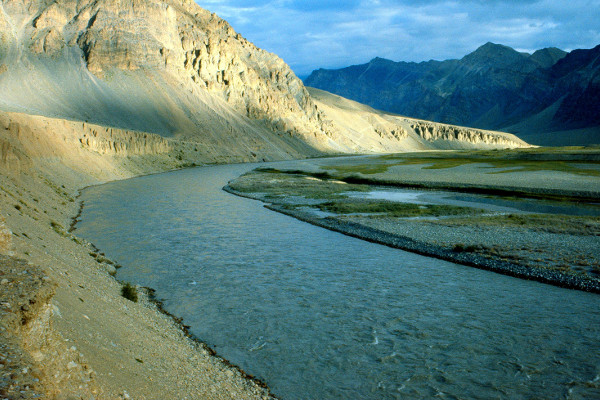 This trek, which is 75km long and takes between 6-8 days to complete, follows the scenic Markha River Valley and traverses 3 passes.

The highlights of this trek are camping near the base of Kang-Yutze Peak and getting a glimpse of authentic Tibetan Culture.

If you plan to hike in the Himalayas, make sure that you are adequately insured for up to 4,000m. We recommend World Nomads. Use the calculator below to get a quick quote.

What countries are the Himalayas in?

The Himalayas are a massive mountain range with a length of approximately 1,500 miles (2,400 km). The mountain range therefore falls in multiple different countries, including India, Nepal, Bhutan, Pakistan, China and Afghanistan.

Where do the Himalayas start and end?

The Himalayas start in Pakistan at the Indus River and stretch all the way to the Bramaputra River in India.

How old are the Himalayas?

The Himalayas were formed 50 million years ago when the Indian and Eurasion plates collided.

Are the Himalayas still growing?

Yes, the tectonic plates are still in the collision process as India moves further north - resulting in an uplift of about 1cm/year at Nanga Parbat (the 9th highest mountain in the world).

What are the three ranges of the Himalayas? 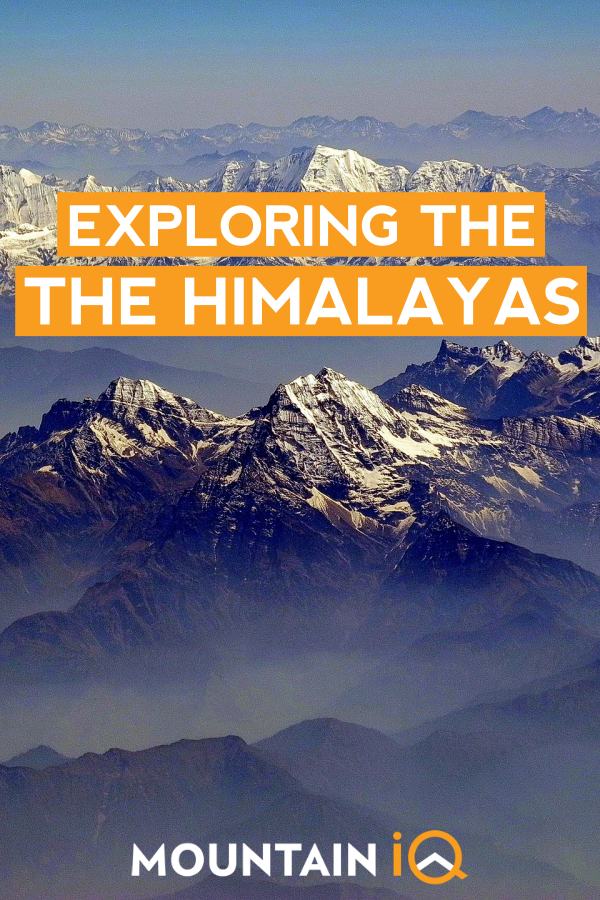