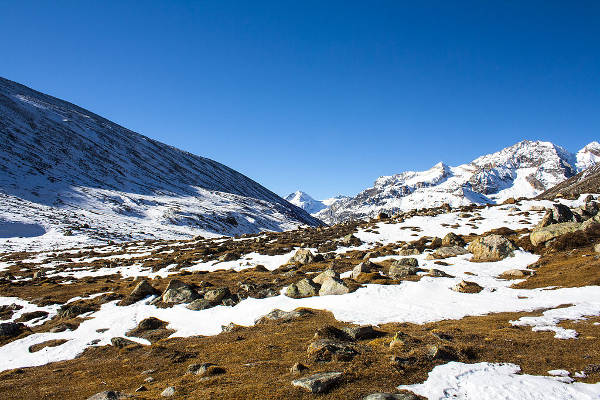 Sikkim is a land-locked state of India. It is situated in the far Northeastern side of India, wedge in between Nepal and Bhutan to the West and East respectively, and China’s Tibet Autonomous Region to the North. To the south is West Bengal.

Sikkim was the last Indian state to give up its monarchy and fully integrate into India in 1975. The population is the smallest of all the states in India, sitting at just over 600,000 people, with over half of the residents being of Nepali ethnic origin.

Sikkim’s geographic position in the heart of the Eastern Himalayas makes it an incredible trekking destination. The third highest mountain in the world, Kachenjunga (8,586m), shares a border with Sikkim, and over 25% of the State’s area consists of national park.

But it is not only the incredible landscapes that make Sikkim an awesome destination to visit, the state also boasts amazing cultural diversity – over 11 languages – and rich biodiversity.

On this page we have provided answers to frequently asked questions about Trekking in Sikkim. You will also find links to detailed route guides for popular trails. How To Get To Sikkim Gangtok is the largest town and official capital of Sikkim state. However, owing to the really mountainous terrain there are no airports or railway stations in Gangtok, or indeed in Sikkim itself.

For most tourists the easiest way to get to Sikkim is to fly to Bagdogra in North Bengal and then get a taxi transfer for the next 124 km (about 4 hour drive) to Gangtok.

The following airlines service Bagdogra from most major airports in India: Indian Airlines, Jet Airways, SpiceJet, Go Air. It is also possible to fly direct to Bagdogra from Bangkok with Druk Air (twice weekly) from Bangkok. For those who can’t stand the idea of a 4 hour taxi ride it is possible to take a helicopter from Bagdogra to Gangtok

If you wish to travel by rail then the nearest stations are Siliguri and New Jalpaiguri. Both have train services connecting them to Kolkata. Again you will need to hire a taxi to take you the rest of the distance to Gangtok.

Finally if you are willing to brave a state owned bus then there are services from Siliguri to Gangtok.

Permits are required to visit Sikkim. The permits is called a Restricted Area Permit or Inner Line Permit, and usually gives tourists up to 15 days to travel in the region.

There is no online application process so you have to get your permit before travelling. If you are travelling with a tour company they will usually secure your permit.

For those travelling solo you can get a permit at the following points: Trekking and mountaineering, along with river rafting and mountain biking, are the most popular tourist activities in Sikkim. In terms of treks there is literally something for everyone in Sikkim.

There are a number of short and easy treks in the southern and Eastern region of Sikkim, and increasingly more difficulty and longer treks that head northward.

For first time travellers to the region we highly recommend the Singalila Ridge trek which provides amazing vistas of the Himalayas and awesome views of Kachenjunga.

Best Time To Trek In Sikkim The best time to trek in Sikkim is in the Spring (late March-May) or in the Autumn (late September through October). From November temperatures start getting cold and the Winter months of December through February are unpleasant. The monsoon season runs from June through to early September and is best avoided.

Unlike most countries, Sikkim has five seasons: winter, summer, spring, autumn, and the monsoon. The climate in Sikkim varies from sub-tropical in the south to tundra in the north. Not surprisingly, the southern parts of Sikkim are the most densely populated as they experience the most temperate weather. As one heads north the altitude gain increases considerably and the most northern regions with the highest peaks are frozen all year round.

A beautiful video by JackDoesTravelling, which shows a 15 day trek in the Ladakh region.

What to Pack for Your Sikkim Hike? Here are some essential trekking gear items we strongly advise to bring with you, for more information see our hiking packing list.

Do I Need Trekking Insurance for Sikkim?

Trekking in Sikkim comes with some obvious risks. Many of the treks are multi-day and take hikers well away from populated areas.

Check out the World Nomads calculator for a quick calculation of the cost of travel insurance for your trip.