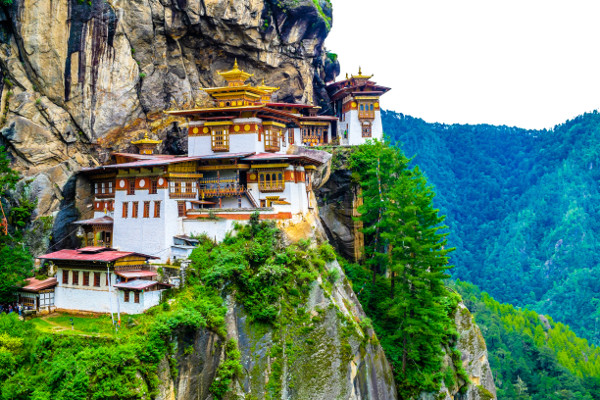 Bhutan is one of the mountainous and beautiful countries on the planet. However, although set deep within the Western Himalayas, Bhutan is by no means a cold and much of the county lies in a sub-tropical climate.

As in all cases, temperatures to drop when you ascend high into the mountains and the peaks off the Himalayas are covered in snow all year-round.

At the highest points, temperatures range from about freezing to 10 degrees Celsius throughout the year. If you’re a warm weather trekker then sticking to the eastern side of the country is the best option as weather is generally warmer there.

Tourists generally visit the country between October and December to coincide with the major festivals, however, Bhutan’s weather means that it is possible to visit any time of the year (depending on what you’re after).

Smaller, and often more authentic festivals, run throughout the year and the trekking routes are generally much more peaceful in the low season. Spring is the best time to visit Bhutan for flora and fauna as all the flowers and animals come alive during this period.

This is the coldest period during the Bhutan calendar, especially in the higher regions where temperatures often fall below zero.

The intrepid trekkers among you will be rewarded though with clear blue skies and more often than not, the valleys below will still be fairly warm.

Although the coldest period, the winter also sees the fewest visitors which means you’ll have the trails to yourself.

This is the second most popular season for tourists to visit Bhutan. Temperatures are perfect and steady and the forests and fields come alive in bloom to produce stunning flames of colour across the countryside. Temperatures gradually increase throughout spring as the monsoon period looms.

If you’re planning on attending the Paro festival in early April then please make sure to book well ahead as the event is extremely popular and hotels fill up well in advance.

This is monsoon period in Bhutan. Trekking during this period can be a little tricky as showers and downpours happen almost every day throughout the country.

If you’re up for it though and don’t mind getting a little wet, you could buy a good raincoat and poncho and head out – the trails will be empty! If you do head to Bhutan in the monsoon period, make sure to get the best views early morning after a nightly downpour.

This is the peak season for tourists entering Bhutan. Skies are clear and blue and temperatures are their warmest during this period.

The majority of major festivals are also held from September to November and for nature lovers, this is the period in which the black-necked cranes arrive in Bhutan’s Gangtey Valley. If you plan on visiting during this period, make sure to book flights, tours and accommodation early as this period sees 80% of all Bhutan’s tourists!

If you have any further questions regarding the best time to visit Bhutan, please just leave a note below and we’ll respond as soon as possible.