Aconcagua is a beautiful mountain sculpted by glaciers.

Aconcagua is more than 4,000 feet higher than any of the other Andes mountains.

Good backpacking skills and high proficiency on steep and icy ground are required to climb it. Experience at high altitudes is beneficial.

The popular Aconcagua normal route can sometimes get busy. Over 4,000 climbers registered in the 2014/2015 season. Guides believe that around 30 percent reach the summit.

There is always a risk of altitude sickness, which can leave Himalayan veterans flat on their backs while less experienced climbers go unaffected.

While dehydration does not cause altitude sickness directly, it reduces the ability to generate heat from muscles, which can lead to altitude sickness, not to mention hypothermia and frostbite.

Drinking four quarts a day is the bare minimum, while six quarts is not excessive.

In Aconcagua: A Climbing Guide, RJ Secor wrote that being well-watered makes him more relaxed and alert and consequently more attractive to the opposite sex, ha!.

Being only 80 miles from the Pacific, there are high winds and sometimes great storms.

It is the climate that causes climbers the most problems: look out for a smoky white layer over the summit, which indicates that stormy conditions are imminent and pressing on would be most unwise.

The official dates of Aconcagua’s climbing season are from late November to late February – the austral Summer.

It is best to climb during the official season firstly because it is warmer and the climate is more stable. Secondly, the necessary logistics are more likely to be available – supplies, mules, porters and the like. Outside of this period, some necessities will be unavailable and the cost of a permit is higher.

At the zenith of the climbing season, mules and porters will probably be pre-booked and accommodation facilities full, and the cost of virtually every product, including a permit, is higher. Any adult who turns up is granted a permit, with further regulations for under-18s. 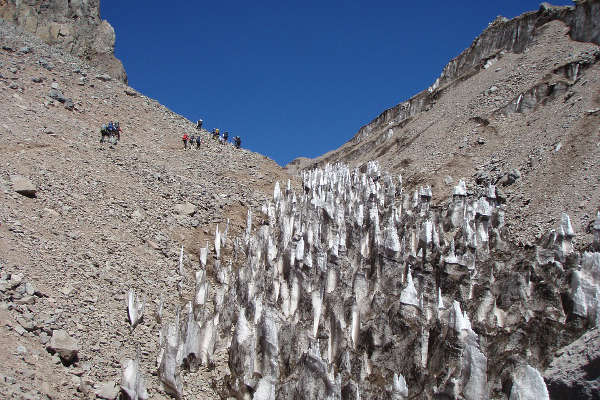 You have to obtain a permit in person from the Department of Renewable Resources on the 1st floor of 1143 San Martin Avenue in Mendoza City, which is open from 8am to 6pm Monday to Friday and 9am to 1pm at weekends. This is on the same side of the street as McDonald’s.

The location has changed several times over the last decade. You could be asked to show your permit anywhere in Mount Aconcagua Provincial Park.

The procedure of acquiring a permit is to complete a registration form, print a payment ticket, pay around £350 through the Pago Fácil billing network – you have priority – and then present the form and paid ticket at the Visitor Centre. Refunds will not be given under any circumstances.

The permit lasts for 20 days. It shows that regulations have been accepted, including the release of the government from responsibility for accidents. You must check in and out of the Park, which is open from 8am to 6pm. If you plan to camp, it is best to enter before 4pm.

In 2007, on-the-spot fines were introduced for a variety of offences.

Fines range from $300 to $3,000 for gathering native wood; starting fires without the direction of a ranger; entering with foreign animals or plants; defecating in the open; leaving rubbish, which includes losing or failing to use the garbage bag provided; contaminating water; camping outside of an appointed place; carving inscriptions on stones; or disturbing wild animals.

Rangers will point out when something belonging to you might be blown away.

Try not to swell the ranks of the 100+ people who have died on Aconcagua in the last century. About three still perish every year.