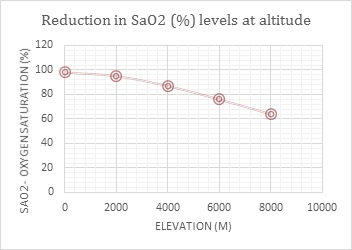 Climbing to high altitude always comes with risks. This is certainly true of Aconcagua where less than 50% of climbers reach the summit.

The main reason for this low success rate is Acute Mountain Sickness (AMS) or, as it is more commonly known – altitude sickness.

On top of this, many climbers exhibit the more severe forms of AMS which includes High Altitude Cerebral Edema (HACE) and High Altitude Pulmonary Edema (HAPE).

Therefore, to help you prepare for your Aconcagua climb, we have written this detailed page describing the process of proper acclimatization and also giving you an overview of the altitude sickness symptoms that many climbers experience on their trek. You can also find information on preventative medications such as Diamox.

Please note: We are not medical experts and this information is given as a resource only. The information should not be relied upon as a diagnostic resource or as a patient-doctor relationship. Research surround altitude acclimatization is constantly evolving and we urge ll our readers to get the most up to date information they can. Anyone who is about to climb Aconcagua should seek medical advise first.

The term acclimatization essentially describes the process in which your body adapts to higher altitude in which there is less oxygen to breathe. Sadly for fast climbers, this process can only be achieved by moving higher very gradually.

Acclimatization is most easily understood when you look at how air density and oxygen change at higher altitude.

At ground level air density it at its thickest because of the pressure, however, when you climb the pressure becomes less, the air density lessens and so the oxygen molecules spread out and become far less concentrated. This means that as humans, we struggle to breathe because the oxygen is not packed tightly together. The molecules are spread out like a very thin layer of butter over too much bread. Therefore, we get less oxygen per breath.

For example, at about 3,600 meters (12,000 feet), barometric pressure is around 480 mmHg. With less air density, oxygen molecules are more widely dispersed in any given column of air and hence less oxygen is available per breath.

To counter the altitude, our bodies naturally adapt by breathing deeper and faster to increase the oygen levels in our blood – much like when we’re running. Because we breathe faster and deeper (even when resting), our blood oxygen saturation increases.

The general altitude sickness line is 2,400 meters. However, some people will experience symptoms below this altitude whilst many will be able to go much higher with no negative effects.

Predicting if you will suffer from AMS is exceptionally difficult. All research suggests that age, fitness, gender, and health bear no correlation to your chances of experiencing AMS.

It is know though that climbing too fast will increase your chances, as will over exerting yourself and not keeping well hydrated. Therefore, to give yourself the best chance of reaching the summit of Aconcagua, you should be planning a slow route whilst ensuring you drink plenty of fluids and rest often, even if you feel well.

One common term climbers refer to is their acclimatization line.

The term is used to describe someones acclimatization point, i.e where your body can go to without feeling the effects of altitude.

Everyone’s acclimatization line will be different. This often makes it slightly difficult when climbing with a group and why many people are left behind. As soon as you hit your acclimatization line you need to stop and allow your body to acclimatize to the new altitude. If you stop immediately, your body will be able to adjust without having to descend.

If you continue to ascend past your acclimatization line then your body won’t be able to cope and the only to ease your symptoms will be to rapidly descend.

How your body adapts and acclimatizes

Luckily, our bodies are intelligent and learn to adapt to their new surroundings. Given enough time, your body will be able to adapt to very high altitudes. Among the most notable are:

1. You begin to breathe deeply and more frequently

2. Higher rate of breathing increases Red blood cell count. This allows oxygen to be carried through the blood more easily

3. The pressure in your pulmonary capillaries greatly increases which forces your blood into areas of your lungs that are dormant when breathing at sea level

4. An enyme is produced thast allows oxygen to be released from hemoglobin to the blood tissue

AMS is extremely common at high altitudes, especially at altitudes above 3,ooo meters where at least 75% of individuals experience some form of mild altitude sickness.

Experiencing AMS is very much dependent on how fast you ascend, how high you ascend and how susceptible you are to the sickness.

Most people will experience some form of altitude sickness, usually within 12-24 hours of arrival. If the symptoms are mild then symptoms will usually clear after 24 hours if you stay at the same altitude.

Climbers describe three levels of altitude sickness, mild, moderate and severe. We look at each below.

When climbing Aconcagua, it is essential that you tell your fellow climbers or guide as soon as you experience any altitude sickness symptoms.

Even though these are mild symptoms. if you experience any of the above it is critical to tell your climbing partners or guide. Mild symptoms will usually disappear if you stay put for a day, however, if you continue to ascend symptoms will get worse rapidly.

The most obvious way to tell that your symptoms are moderate is when your mild symptoms have increased to a level in which the symptoms become debilitating. Most climbers on Aconcagua who have mild symptoms will have bad headaches and be vomiting. However, we have also seen plenty of people loose coordination and speech.

Most people on Aconcagua with these symptoms cannot walk. However, even if you can then don’t. To continue to ascend would put your life at risk. Your symptoms would continue to deteriorate and you would need to be evacuated off the mountain on a stretcher. If you tried to continue your condition may result in death.

If you do experience moderate symptoms then you must descend immediately. This is the only cure. You will need to descend at least 1,000 feet and remain there until all symptoms have passed. Only then should you begin to ascend once more.

To ascend with severe symptoms is nearly impossible and should never happen. The result would likely lead to death. People who are experiencing severe altitude sickness will be struggling both mentally and physically. Walking will be out of the question and the climber should be carried down the mountain as soon as can be arranged. A person with severe symptoms will have slurred speech, poor coordination and often a splitting headache.

When a climber gets to this stage they will often experience one of two conditions associated with severe AMS. These are High Altitude Pulmonary Edema (HAPE) and High Altitude Cerebral Edema (HACE).

HAPE is when fluid leaks through into the capillary walls of your lungs, where as HACE is when fluid seeps into your brain. Both conditions are uncommon and almost always occur from poor acclimatization. We discuss both below.

High Altitude Cerebral Edema (HACE) is a life threaning condition and every possible precaution should be taken against it. HACE often follows on from AMS and is the result of fluid seeping into the cranium due to brain tissue swelling.

Anyone who experiences HACE on Aconcagua should descend straight away and seek medical support.

HACE symptoms include the following:

HACE often presents itself during the night. If this is the case, you must ascend immediately, even if dark. The condition will only worsen by morning and the longer you leave the disease untreated, the higher the chance of death.

If anyone in your crew has bottled oxygen then administer this to the sufferer. If anyone has the steroid dexamethasone, this should also be administered. However, this is no substitute for descending.

Climbing back down to a lower altitude is the only cure.

HAPE is a very serious condition and if left untreated will lead to cyanosis, reduced cerebral function and death. Whilst deaths are uncommon on Aconcagua thanks to professional guides, deaths do occur. Because it’s a life threatening disease, every possible precaution should be taken to prevent such an occurrence.

Clear symptoms of HAPE include the following:

If the climber presents the last symptoms mentioned (confusion, slurred speech, irrational behaviour), then it is safe to assume that pulmonary edema has taken effect of the brain from lack of oxygen.

When suffering HAPE it is absolutely vital that you ascend immediately as this is the only cure. Depending on who you climb with, a member of your crew or team may have bottled oxygen, if so, administer this straight away.

If a person in your group is suffering from HAPE, make sure they don’t exert themselves when descending as this will only harm them further. If a stretcher is available this is usually the best option.

After descending to ground level you must seek medical support straight away, even if your symptoms are clearing.

Whilst there are several ways to monitor ones AMS symptoms, the most common system is using the  Lake Louise Altitude Sickness Scorecard (as demonstrated below). 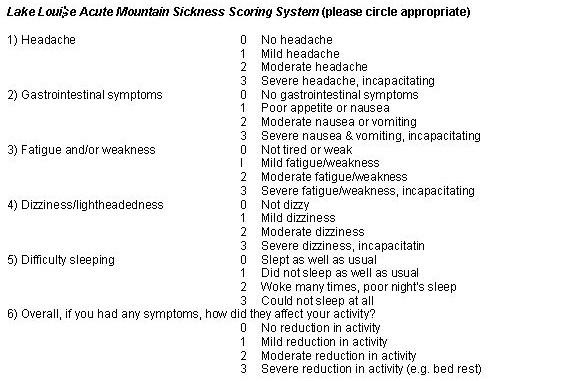 Mild to moderate symptoms is a score anywhere between 3 and 7. A score above 7 indicates severe AMS.

A good Aconcagua operator will use the Lake Louise Scorecard system, along with spot oximeter and pulse readings. This is the most accurate way to tell if a climber is suffering AMS.

If your reading are above 8 on the scorecard or if you have a SO2 reading below 75%, you should turn back and descend off the mountain. The Base Camp at Aconcagua usually has spot oximeter’s for you to use, however, it’s always advisable to bring your own.

To give yourself the best chance of summiting Aconcagua, always follow these golden tips:

3 Golden Rules to keep in mind in regards to AMS:

Acetazolamide, or Diamox, is one of the few drugs that has been proven to help with altitude sickness.

The drug enables your body to breathe faster to increase more oxygen in your blood. it does this by increasing the acidity in your body which your body takes as increased CO2.

Whilst you can breathe fast during the day if you so choose, at night Diamox is particularly effective as it stops your body from breathing too slowly.

It is generally recommended that you begin to take Diamox 24 hours before ascending to altitude. 125 mg twice a day is the recommended dose for climbers.

Although side effects are uncommon, they can include tingling lips, tingling finger tips, blurred vision and a slight alteration in taste.

Diamox should not be taken as a cure to keep ascending. If AMS symptoms present themselves, the only cure is descending. Please note that Diamox is a prescription drug and you’ll need to consult your doctor before purchasing.

If you have any further questions regarding Aconcagua altitude sickness, please just leave a reply below and we’ll get back you as soon as we can.

Thank you and safe climbing!

Previous Post Spectacular Festivals In Bhutan (When To Go and What NOT To Miss!) Next Post Kala Patthar Trek – The Viewpoint to Everest