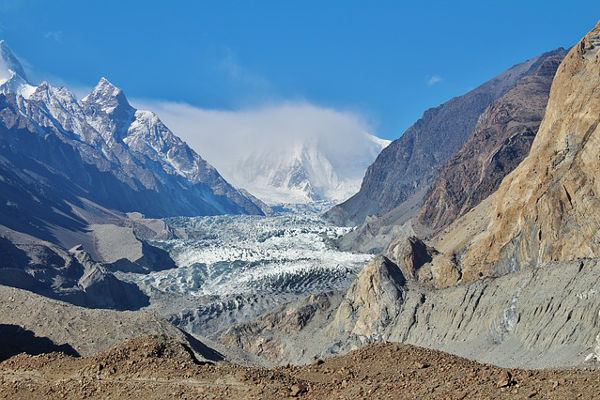 Below is a guide to the Karakoram Mountain Range, including information on notable mountains and hikes within the range.

The mountains in Asia originated from folding in the Cenozoic Era. Granites, gneisses, crystallised schists and phyllites dominate the geological structure. At the end of the Mesozoic Era, the region was characterised by great structural changes.

The Karakoram emerged as a result of intensive geologically recent upheaval. The range is still experiencing frequent seismic activity. Some events are so violent they often trigger massive rock and ice avalanches.

There are a total of 7 passes within the mountain range, Khunjerab is the most famous. The Karakoram Highway, a 1,300km long road connecting Pakistan and China is a popular tourist attraction.

At the lower valleys, all profuse vegetation is anthropogenic. The rocky and arid lower slopes only support discontinuous grazing areas.

The Karakoram have upper and lower treelines, the upper delimited by cold and the lower by aridity. In these lines is only degraded, sparse tree cover. Willow, poplar and oleander thickets occur along water courses up to 3,000m.

Juniper can be found on high slopes among seasonal snowfields.

Shrubs of the genus Artemisia provide sparse cover on the lower slopes.

Hunting as taken a severe toll on the mountain wildlife in the Karakoram. Marco Polo sheep now only breed in the eastern Pamirs and migrate west.

Ladakh urials inhabit the high, flatter mountains to the east and Siberian ibex and markhors negotiate the craggy slopes.

Brown bears, lynx and snow leopards are amongst the endangered species. Wild yak and large raptors can also be found in the mountain range.

Mountain Regions in the Karakoram

Here is a list of the subranges that lie within the Karakoram Mountains. The list runs from west to east. 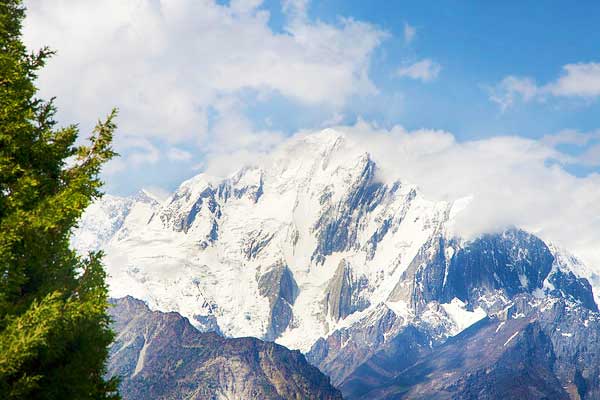 This is the westernmost subrange. It is home to Muchu Chhish, the second highest unclimbed peak in the world. 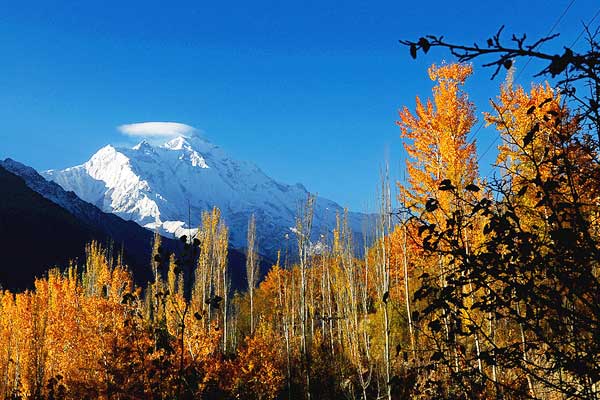 Located in the Gilgit-Baltistan province of Pakistan. 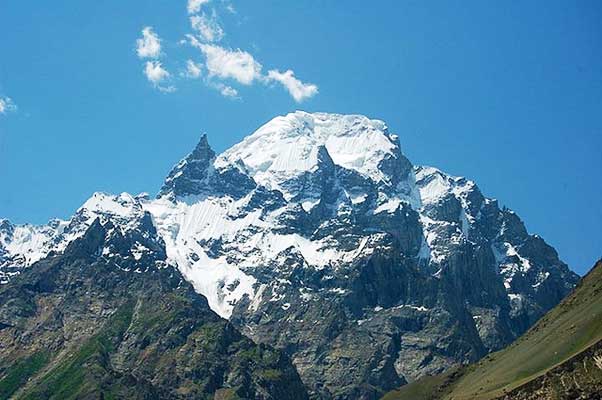 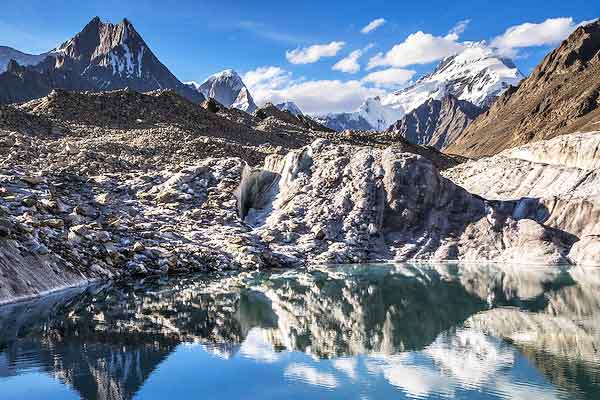 This is the second highest sub-range in the Karakorams. 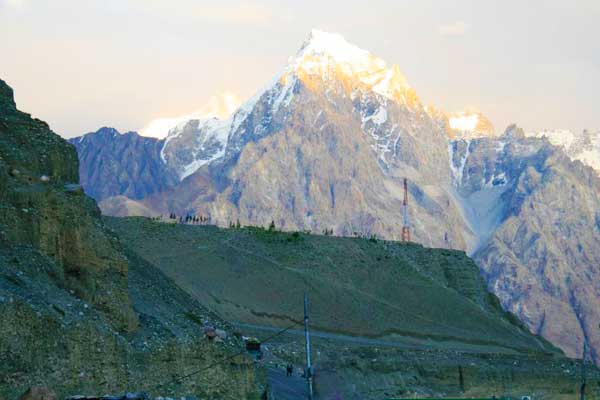 Located in the northern areas of Pakistan. 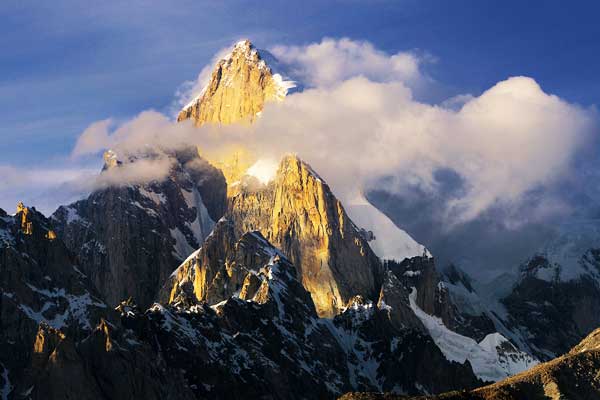 This subrange lies in the heart of the Karakorams in Gilgit-Baltistan. 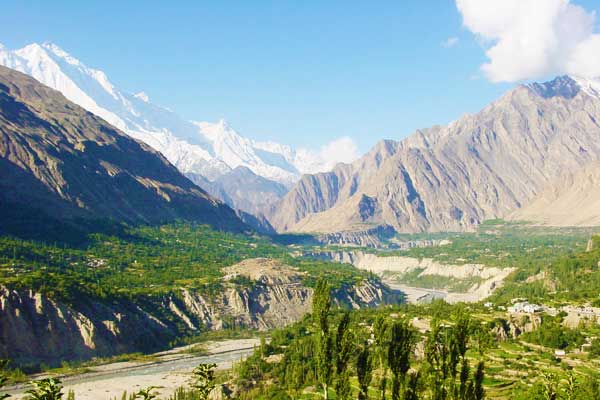 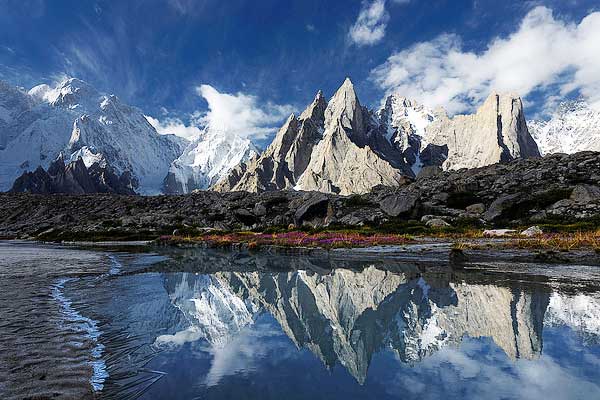 Lies on the southside of the Baltoro Glacier. 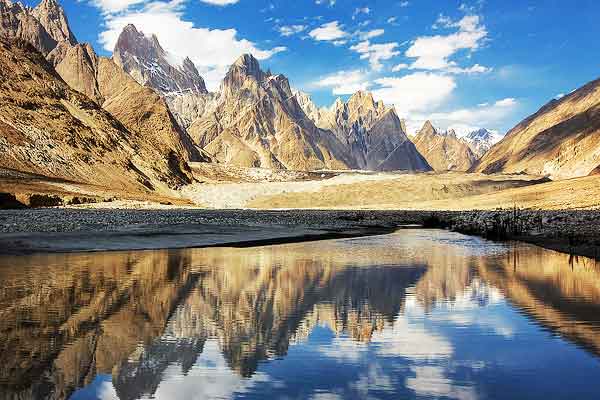 Highest sub-range and home to K2 as well as 3 other eight-thousanders. Its crest forms part of the China-Pakistan border. 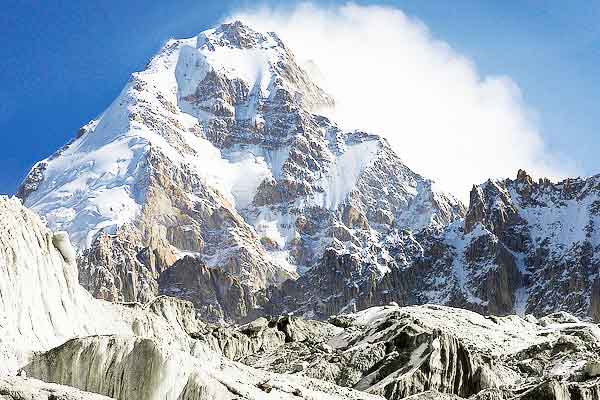 Lies on the southwest side of the Siachen Glacier. 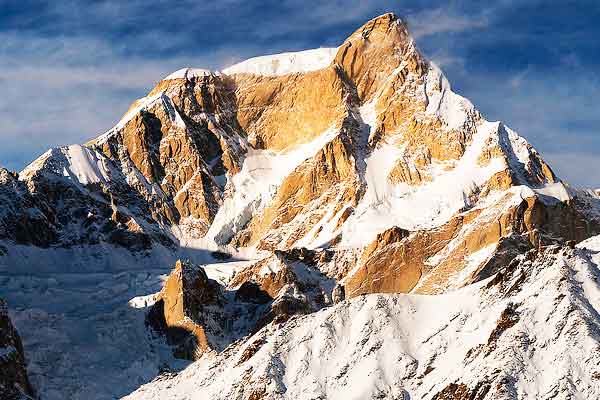 This remote range is 60% controlled by China and 40% by India. 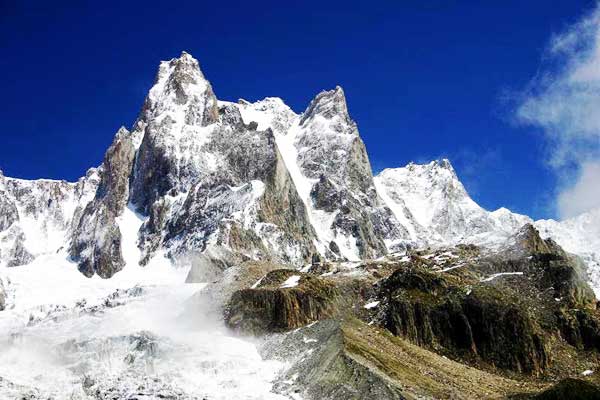 This is one of the most remote sub-ranges. 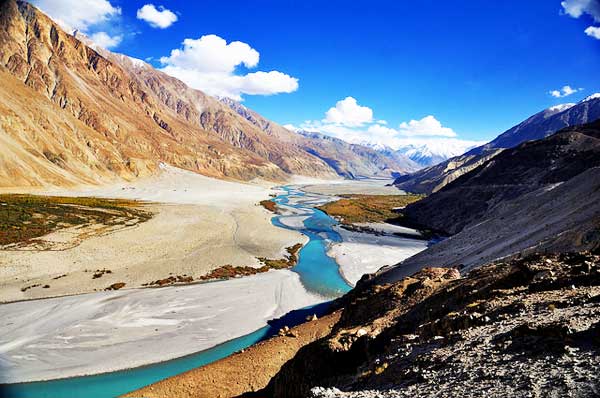 This is the easternmost subrange, in the Ladakh region of India.

Notable Mountains in the Karakorom 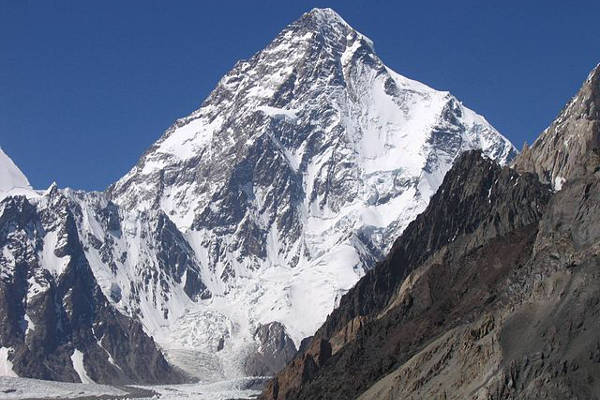 K2 is one of the eight thousanders. Also known as Mount Godwin-Austen or Chhogori, is the second highest peak in the world and stands at an impressive 8,611m above sea-level.

It is located on the China-Pakistan border. It is known as the “Savage Mountain,” due to its extremely difficult ascent. It is considered the world’s most dangerous mountain with 300 successful summits and 77 fatalities.

It was first summited in 1954 and has never been summited during winter.

K2 has not yet been summited in winter. 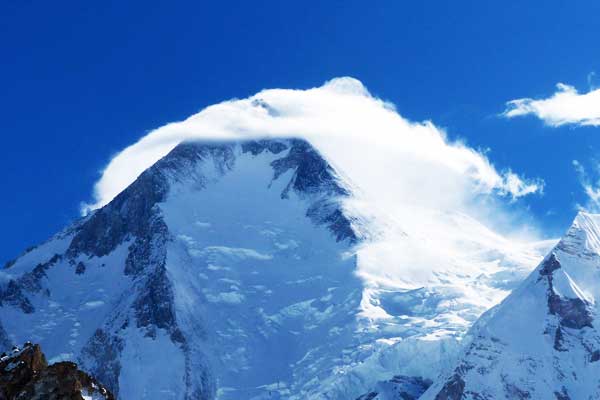 This mountain was surveyed as K5 and is also known as the Hidden Peak. It is the 11th highest mountain in the world and forms part of the Gasherbrum Massif. It stands at 8,080m above sea-level and is located on the China-Pakistan border. 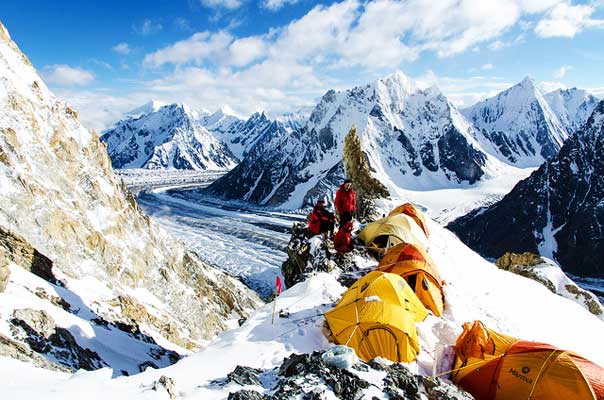 At 8,047m above sea-level, Broad peak is the 12th highest mountain in the world. It forms part of the Gasherbrum Massif and is about 8km away from K2. 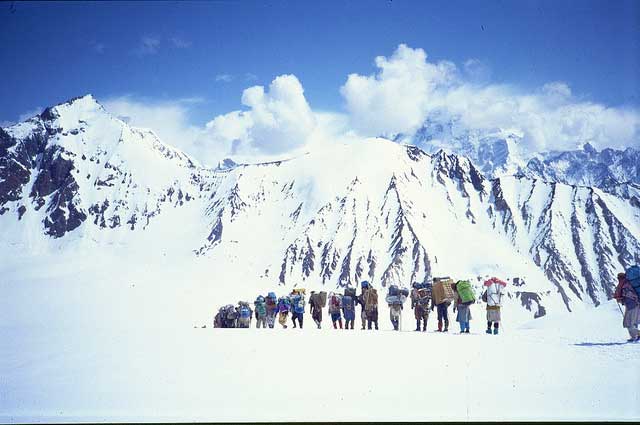 Gasherbrum II, surveryed as K4, is the world’s 13th highest mountain and the third highest peak in the Gasherbrum Massif. It stands at 8,035m above sea-level, making it the shortest of the eight-thousanders in the Karakoram Mountains. 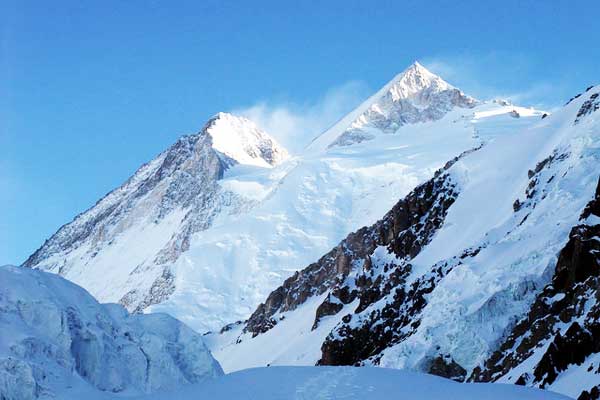 Gasherbrum III, surveyed as K3a, is at 7,952m above sea-level, just short of being an eight-thousander, but it is still an impressive peak nonetheless. It also forms part of the Gasherbrum Massif and lies between Gasherbrum II and Gasherbrum IV.

It was once one of the highest unclimbed summits in the world until the first ascent in 1975.

Notable Hikes in the Karakorom

Hiking the Karakorams is a life altering experience. But you need to be well-prepared in order to make your journey as easy as possible, make sure you have the right clothing and equipment for the trek you are going to embark upon.

You will most likely be camping on your treks, with a few nights at hotels at the beginning and end of the trek.

A guide is recommended, and there are many tour agencies offering guided treks.

Mountaineering season falls within the summer months of June-September with July and August being the most popular. You will definitely want to avoid the harsh weather and heavy snows of the winter months which would make your trek more dangerous.

Below is a list of notable hikes/treks in the Karakorams. 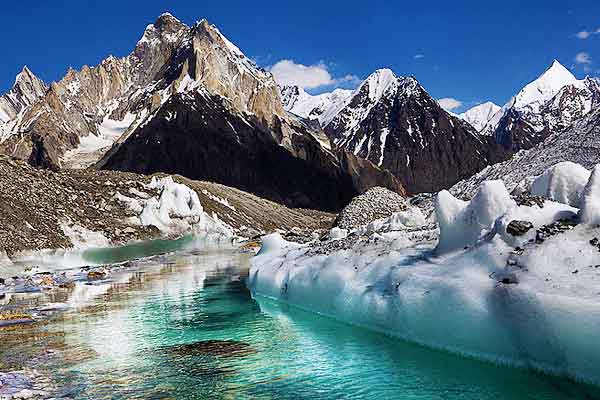 The trek to the K2 Base Camp is considered to be one of the world’s greatest treks with its breathtaking scenery and view of some of the world’s highest peaks. The trek should take between 9-15 days and you can expect to be trekking for around 5-7 hours a day.

You will trek up the mighty Baltoro Glacier and take in the incredible views of the great peaks of the Karakorams.

Although this isn’t the K2 summit, the trek is still very challenging, and you should be prepared and physically fit.

Experience one of the most spectacular treks in the world with the K2 Base Camp Trek. 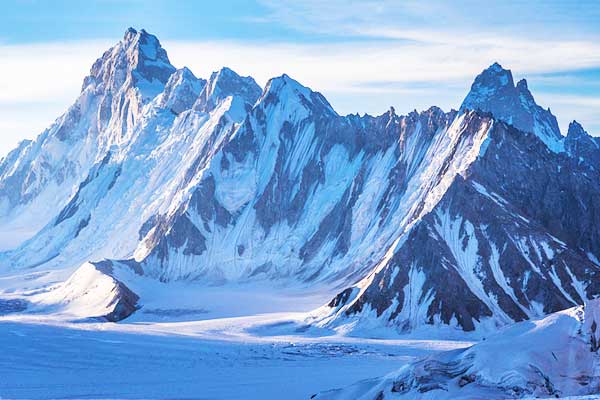 The Snow Lake is a high-altitude basin which is over 16km wide and is located at the head of the Biafo and Hispar Glaciers. The trek crosses the two glaciers end-to-end, this is the longest glacial system within the Karakorams at 116km long.

Where the glaciers meet lies the Snow Lake, which is encircled by unnamed and unexplored peaks.

You will have the privilege of trekking in a truly remote and stunning area. The trek is considered by some to be one of the most beautiful treks in the world. You will trek past stark mountains, icy white glaciers and gorgeous flower-filled meadows.

Although beautiful, the 15-day trek is strenuous, and you will need to be physically fit in order to complete the journey.

Your accommodation will be a combination of camping and hostels. 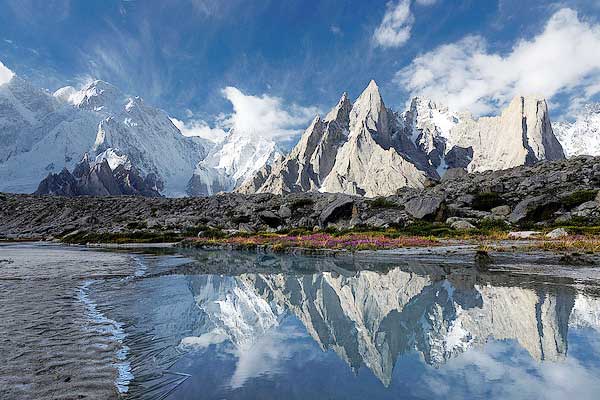 This easy trek is one of the most popular short treks in the Baltisan region. The 11 day-trek is ideal for those interested in exploring the life of highlanders in Baltisan and truly experiencing Balti culture.

The trek is around 11-days long and meanders through Khaplu and Shiger Valleys. You will see the beautiful fruit orchards and lush green glory of full alpine flowers in the summer.

The trek takes you through varied landscapes; from the sands of the Indus Valley to the high snows of spectacular peaks. 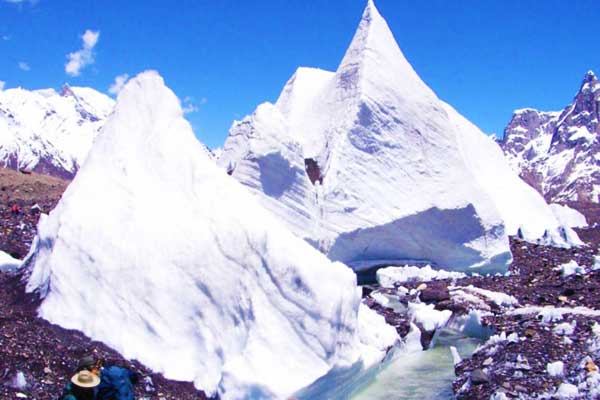 This expedition is a combination of two of the world’s most interesting and beautiful treks; Condogoro Glacier and the Panoramic Trek which go through Snow Lake and Hisper La. You will traverse two of Karakoram’s main passes and be treated to incredible views of the immense mountains and bountiful glaciers of the range.

The expedition can last up to 33 days with 26 nights camping and 6 nights spent in a hotel.

The trek is certainly strenuous and is only recommended for good, experienced trekkers.

If you plan to hike in the Karakorom, make sure that you are adequately insured for up to 4,000m. We recommend World Nomads. Use the calculator below to get a quick quote.