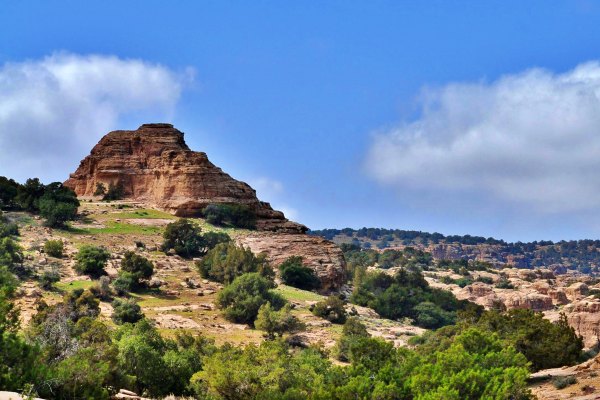 Jordan is located in the Middle East and is defined by its dramatic desert landscapes and sweeping canyons, and is known for its historical sites, such as the city of Petra. Hiking in Jordan takes you to some of the most exceptional historical sites you can find!

Jordan is considered a safe country for tourists, and the people of Jordan are among some of the most friendly and hospitable people in the world. And, its quite easily one of the most progressive Middle Eastern countries.

Travelling to Jordan is sadly overlooked by many travelers and with so much to offer it really should be on any outdoor adventurers’ bucket list. The vast untouched landscapes are just waiting to be explored!

We’ve created a guide to the best hikes in Jordan to show off its natural beauty, scenic wonder and historical monuments.

We begin with the best and most popular trail in Jordan. Hiking the Jordan Trail is an unforgettable experience and tests your limits to the core.

Accomplishing the 650km journey over a long 40 days requires determination, proper preparation and planning, and a good level of fitness. The route is easy to navigate and passes through 52 villages and towns where you can grab a bite to eat and rest overnight.

The trail encompasses many shorter hikes to do in Jordan, and most of the Petra Trails. If you are not up to the full 40-day adventure then it is possible to only do sections of the hike. The Dana to Petra section has been classified as one of the best 15 hikes in the world by National Geographic!

Along the way you will find sites such as Umm Qays and Petra, pass through desserts and canyons and even get a glimpse of the Dead Sea. Hiking the Jordan Trail is possibly the best way to experience the country of Jordan, its culture and its nature. 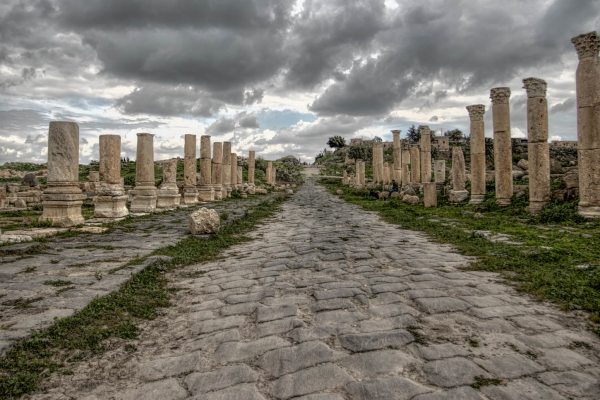 Hiking to Petra is popular in Jordan! It has been classified as a UNESCO World Heritage Site and brings tourists from around the world to the country. There are various routes to this famous site and so we have listed them all here for you to decide which is the right one for you.

Starting at the visitors center, this trail is a total of 4kms one way. It starts by following a narrow gorge for 1,2km until you reach Petra. The trail continues to the Treasury which is only a short 2km hike from the center.

The trail is flat and downhill, so it is fairly easy. Heading back to the center will be uphill though so keep that in mind.
Continuing on the trail past the Treasury (the lower Siq), you’ll pass the Royal Tombs, Street of Facades and to the Great Temple. 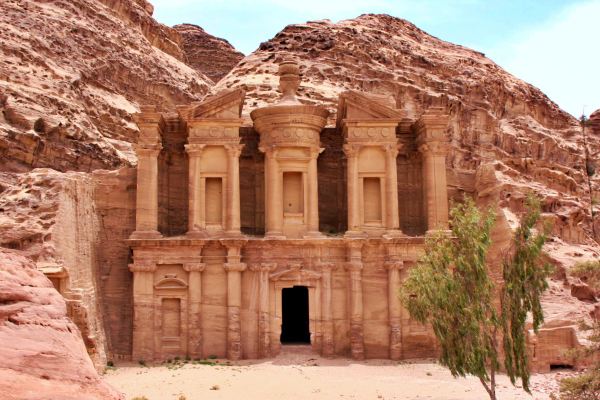 Ad Deir is one of the largest monuments in Petra. It’s a whopping 47m wide and 48m tall. This is the ending point for the Petra Monastery Hike. Beginning at the end of the Petra Main Trail, the hike is a 2,5km round trip.

A 3,5km trail that takes you to the viewpoint situated above the Treasury. Starting at the Royal Tombs, you will follow the sign that says ‘Al Khubtha Trail’ which takes you up the back side of the mountain.

Keep your eyes out for the stacked stones which let you know you are on the right path. Some points are not well marked so use these stones as your guideline. There is a place to stop for tea at the top! When you are ready to leave, head back down the same way you came. 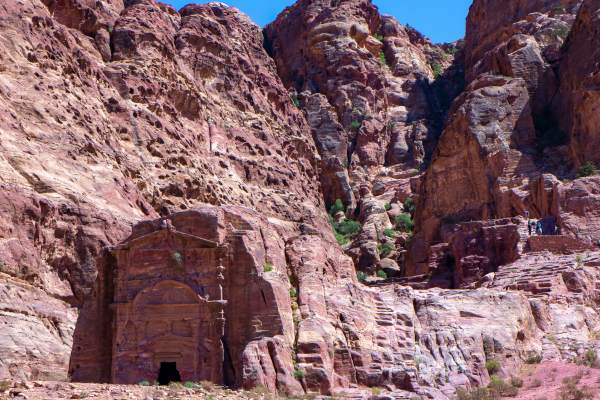 Known as ‘entering Petra through the backdoor’, this trail begins in Little Petra and ends at the Monastery. The trail is popular for group tours and its part of the Jordan Trail. Its an 8km one-way hike and requires your Petra ticket. Tickets for Petra are not issued at Little Petra.

The Dana to Petra Hike is a challenging yet rewarding hike in Jordan. National Geographic has added this trail to the top hikes in the world! It takes 4 to 5 days to complete and is 72km in total. It begins in Dana Village (1,250m) and drops 250m into Araba Valley before heading back up to finish in Petra. 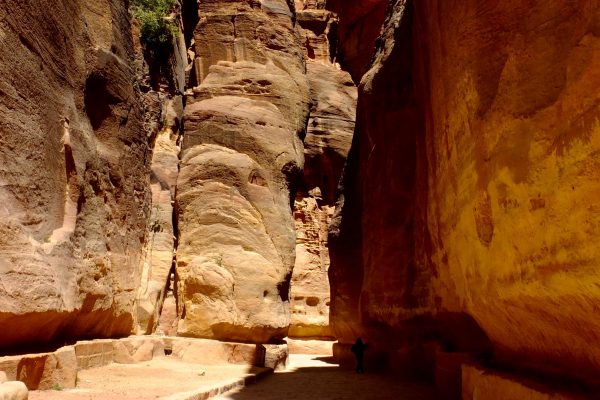 Mount Nebo (1,100m), or ‘Siyagha', is famously known for its mention in the Bible, as the place where Moses was first shown ‘The Promised Land’ and is believed to be his final resting place. Admired by people of all faiths it is often visited for the incredible panoramic views from the top.

The Mount Nebo hike is the shortest hike in Jordan. From the peak you can see the Dead Sea, all the way to Bethlehem and if it’s a clear day, even as far as Jerusalem.

The base of the mountain is a short 15km car ride from the center of Madaba and there is an entrance fee ($3) to be paid before walking to the top. 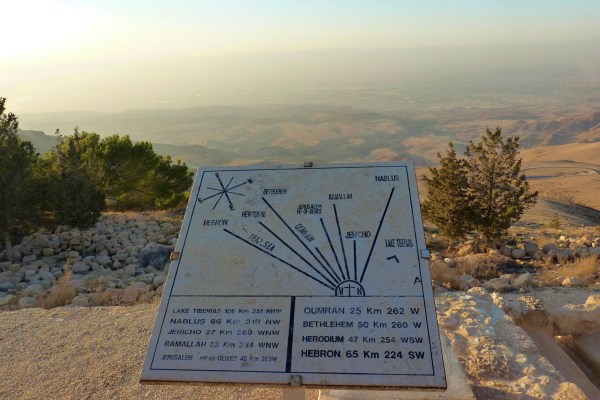 Another trail located in Dana Nature Reserve, one of the most beautiful areas in the country. The Wadi Ghuweir Trail is a peaceful yet challenging 27km hike.

The trail consists of hiking in a canyon, climbing over big boulders and wading through a stream. Bring some water shoes for this hike as you will be walking in the water for a good part of the trail. 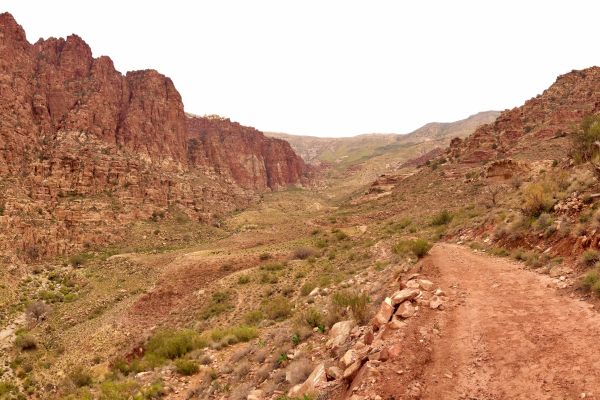 It is a 7 hour hike through some tough sections and areas where you are completely exposed to the sun. Make sure to wear a hat or head protection and bring enough water for the duration of the hike. Another important item to pack is your camera. There are endless photo opportunities along the route!

For an insta-worthy experience – this is the trail! This river hike located near the Dead Sea, takes you through a narrow canyon and is popular during the hiking season in Jordan. During the winter months this trail is closed.

Hikers must be over 18 years old and it requires substantial upper body strength to tackle the ladders and ropes used to climb throughout the water.

Be prepared to get wet and there is a good chance you will end up under water! So keep all your valuables in the lockers or in your car. But don’t forget your GoPro! 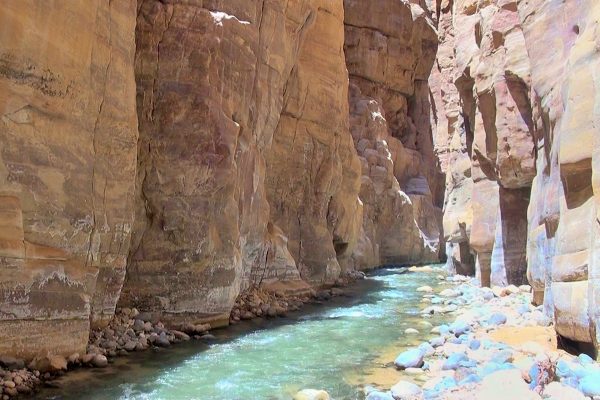 The Mujib Biosphere Reserve is a diverse landscape and has plenty of various hiking trails to explore. The most popular route being The Mujib Trail. The trail is challenging and is a 15km trek.

There is also The Siq Trail which is fairly easy and takes you across the dam and between huge cliffs leading to the waterfall where you can take a quick dip!

The Canyon Trail is one for the brave and takes hikers on a thrilling descent of a 20m waterfall. 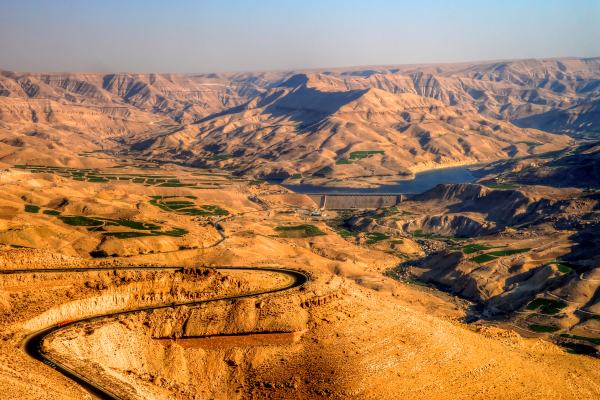 Hiking in Jordan is best during spring (March and April) and autumn (October and November). However, the ideal time to hike can vary by region as the north is cooler than the south.

March and April are best in the southern regions when the temperatures are comfortable, the forests are green, streams are flowing, and the flowers are blooming. In the northern regions these months would be February and March.

You could also hike during September and November, but flowers and greenery would have died out over the hotter months. The hottest months are late-May to mid-September, and most consider this time too hot to trek.

Winter is also good to hike, but you will probably have occasional rain and sometimes even snow. Besides that, it’s rather pleasant to hike in Jordan during winter.

Quick Tip
Check the Muslim calendar for holidays such as Ramadan. The hiking trails will still be open, but services may not be available or will be limited. 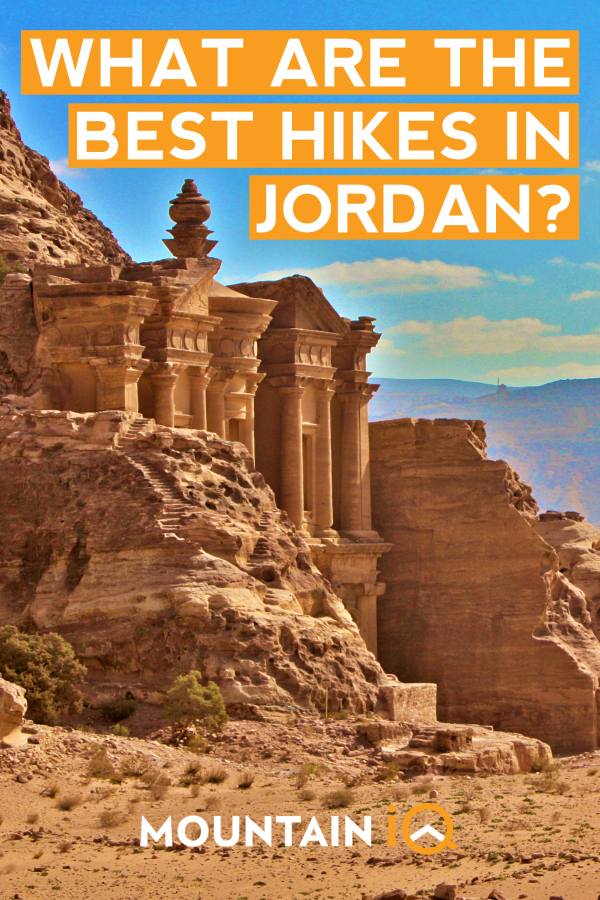 About the Author Kayla Gallocher

Kayla lives in sunny Cape Town, South Africa. She loves wildlife and being in the mountains! Anything to get away from the city and relax in the peace and quiet of nature.

Hiking In Croatia – Expert Guide To The Top 7 Trails