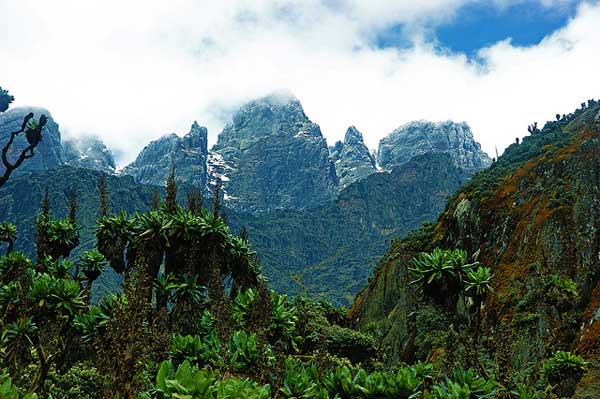 The Rwenzori, previously the Ruwenzori, is a mountain range located between the east African countries of Uganda and the Democratic Republic of Congo (DRC).

These impressive mountains are home to glaciers and feature white, snowy peaks. Resulting in the range being called the 'Mountains of the Moon' by the natives. The Rwenzori Mountains are also an important source of water for the Nile River.

Check out this guide to find out more about the Rwenzori Mountain Range, including its physical geography, flora and fauna, notable mountains and some of its top hiking trails.

The Rwenzori Mountains were formed as a result of a shift in the Earth's crust over 3 million years ago. This shift caused an uplift of rock made up of gneiss, quartzite and granite.

It is believed that the shift in tectonic plates pushed the mountain block upwards and tilted it to form the high peaks of the range. Erosion and the deposition of sediment has moulded the range over many years into the formation we see today.

The range is made up of six massifs, which are divided by deep gorges. These include Mount Stanley, Mount Speke, Mount, Baker, Mount Emin, Mount Gessi, and Mount Luigi di Savoia.

The Rwenzori Mountain Range forms part of the Albertine Rift, which is the western portion of the East African Rift.

With its high peaks and deep gorges carved by glaciers, the topography of the Rwenzori is very distinctive. The mountains are the only range in Africa to represent glacial equatorial basement rock that has been uplifted.

The Rwenzori Mountains have a very wet climate, with mist and rain occurring throughout the year. There are two short dry seasons from June to August and from December to February. While rain is slightly less frequent during these periods, it is still quite a common occurrence.

These months typically have clearer days so they are considered the best time for hiking. Daytime temperatures are quite chilly, usually ranging between 50-59˚F (10-15˚C). Nights get very cold with temperatures sinking to about 35-42˚F (2-6˚C).

Because of its proximity to the equator, the Rwenzori Mountain Range is affected by the Inter-Tropical Convergence Zone (ITCZ), which is a low pressure zone that results in heavy rains during the spring and autumn months.

April, May and November are particularly wet months and are the low seasons for the mountains. Rainfall generally occurs in the afternoon so hikes can still be enjoyed in the mornings during these periods.

The Rwenzori Mountain Range is well known for its rich and diverse plant life. From African savannah and tropical rainforest to alpine meadows, bamboo forests, heath and snow, the mountains have a wide range of different ecological zones.

The lower reaches of the mountains consist of savannah grasslands that home many different animal species. Above the savannah zone, lies the rainforest area, which sits between 1,676 and 2,286 meters on the Rwenzori.

An impressive bamboo forest lies above the rainforest, with tall bamboo sticks sprouting up from the ground. Above the bamboo forest sits the heather zone at about 3,000 - 3,800 meters. The alpine zone covers the upper reaches of the Rwenzori from about 3,500 meters. Plants in the alpine area, like giant lobelia and groundsels, can grow to an unusually large size here.

Lastly, the nival zone takes over at an elevation of about 4,400 meters. This zone covers the highest points of the Rwenzori Mountains in permanent snow and glaciers.

The Rwenzori Mountains are also home to many species of animals. Over 70 mammal species can be found along the lower slopes of the range, including chimpanzee, hyrax, various monkeys, elephants, duiker and bushbuck. Elephants can be found within the forested areas on the slopes and hyraxes can be found between 3,000 and 4,000 meters.

The birdlife in the Rwezori Mountains is quite impressive as it supports 195 different species. Many endangered species can be spotted within the forests, making the mountains a very important birding area. One of the most striking birds to look out for is the brightly coloured Rwenzori Turaco.

The majority of the mountain range lies within the Rwenzori Mountains National Park, which is a UNESCO World Heritage Site due to its incredible natural beauty. 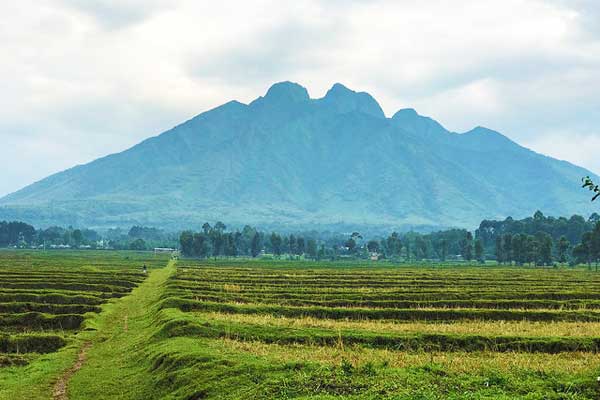 Only about 20% of the Rwenzori Mountain Range is located within the Virunga National Park in the DRC.

It is also a UNESCO World Heritage Site and shares some of its border with the Rwenzori Mountains National Park. Thereby sharing the highest peak within the mountain range - Mount Stanley at 5,109 meters above sea level.

The Rwenzori Mountain Range consists of six massifs, some of which have several of their own subsidiary summits, like Margherita Peak on Mount Stanley. The range features six out of Africa's ten highest peaks.

Here is an overview of the six main peaks of the Rwenzori Mountains. 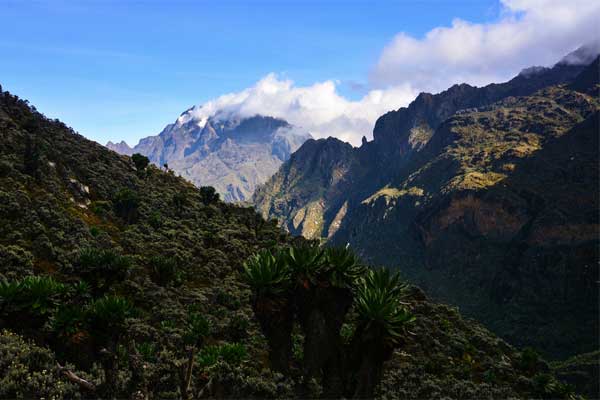 Mount Stanley is the highest of all the Rwenzori massifs with an elevation of 5,109 meters above sea level. Its highest summit is called Margherita Peak, but it has about 11 subsidiary peaks as well. Mount Stanley is high enough to support several glaciers, including the Stanley Plateau.

The highest peak of Mount Stanley actually marks the boundary between Uganda and the DRC.

Mount Stanley was first summited by Luigi Amedeo (Duke of the Abruzzi), along with J. Petigax, C. Ollier, and J. Brocherel in 1906. 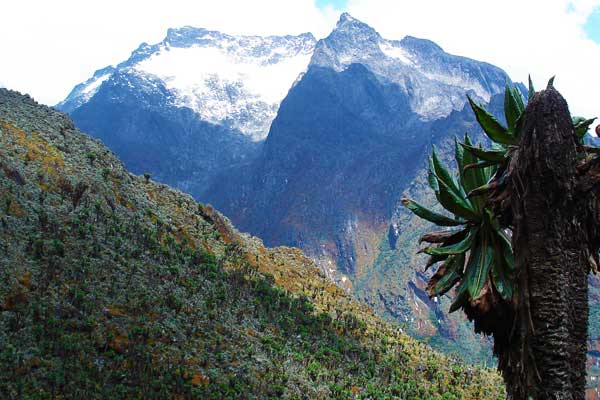 Mount Speke is the second highest peak within the Rwenzori range sitting at an elevation of 4,890 meters. Mount Speke has four summits: Vittorio Emanuele (4,890m), Ensonga (4,865m), Johnston (4,834m), and Trident (4,572m). Along with Mount Stanley and Mount Baker, Mount Speke creates a triangle which encloses the Bujuku Valley.

Mount Speke was named after John Speke, an English explorer, who never actually summited the peak. But he did, however, map the source of the White Nile river. 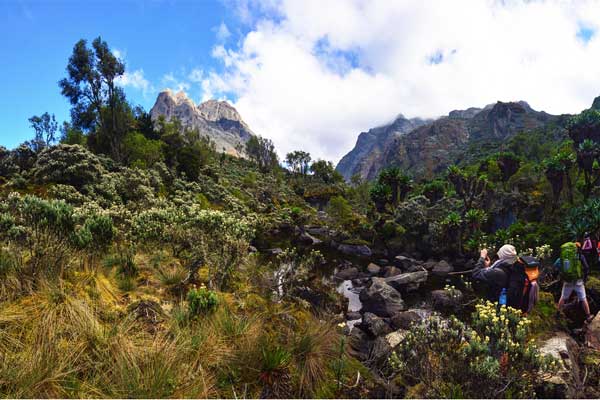 Mount Baker, also known as Kiyanja, is the third highest massif in the Rwenzori Mountains at 4,844 meters. Similar to all the other massifs in the range, Mount Baker has a jagged formation resulting in multiple subsidiary peaks - the highest of which being Edward Peak.

The ridge of Mount Baker was first climbed in 1906  by Rubert Grauer, an Austrian mountaineer, along with H. E. Maddox and H. W. Tegart, who were both British missionaries. However, the peak was first summited by the Duke of Ambruzzi's party, who had conquered all five of the other Rwenzori peaks as well. 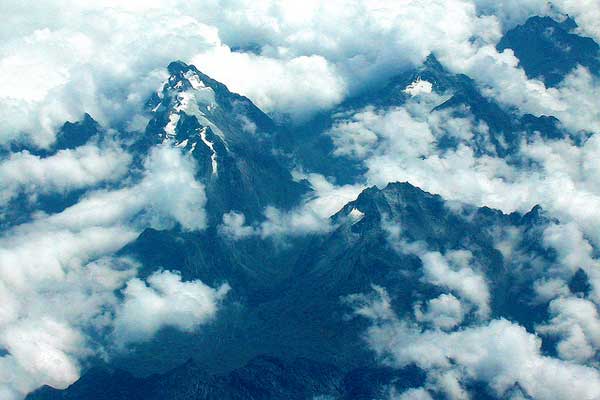 Mount Emin is located within the DRC and is the fourth highest peak of the Rwenzori Mountain Range standing at 4,798 meters above sea level. It consists of two main peaks which are connected by a narrow ridge.

Umberto is the more southern peak and is the taller of the two. It was first summited by the Duke of Ambruzzi and his expedition team in 1906. The second major peak is called Kraepelin Peak. 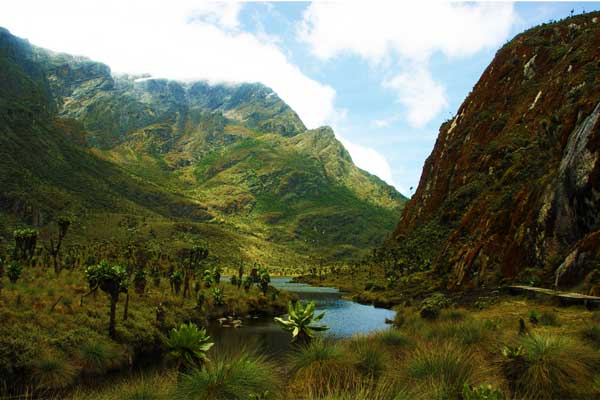 Mount Gessi sits at 4,715 meters and can be reached through the Mugusu Valley. The peak was once covered in ice and glaciers which have since melted away. Mount Gessi has two twin peaks: Ioloanda and Bottego which sit at 4,715 and 4,699 meters respectively.

The Duke of Ambruzzi's party were also the first to summit Mount Gessi in 1906. Although the route they used has since melted and does not exist today. 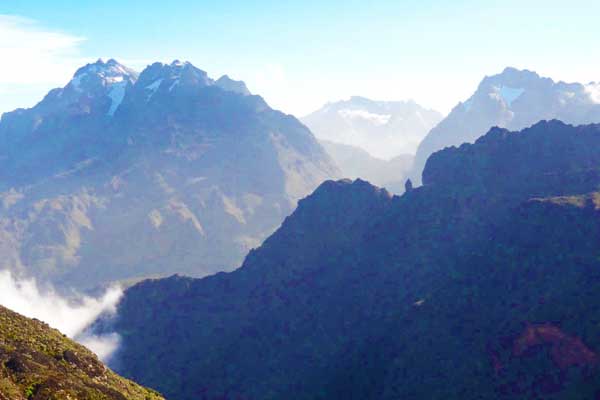 Similar to the other massifs in the range, Mount Luigi di Savoia consists of a ridge with multiple summits. Some of these subsidiary summits include Stairs Peak, Sella Peak and Weismann Peak. Mount Luigi di Savoia is the shortest out of all the Rwenzori massifs and was the first to have its glacial ice melt away.

Notable Hikes in the Rwenzori

The Rwenzori Mountain Range is an amazing spot for hiking and mountaineering. Expeditions to the various peaks of the range can be done through multi-day treks. However, there are also shorter circuits and routes for more inexperienced hikers or people who just want to explore the mountains on a day hike.

Here are some notable hikes within the Rwenzori Mountain Range. 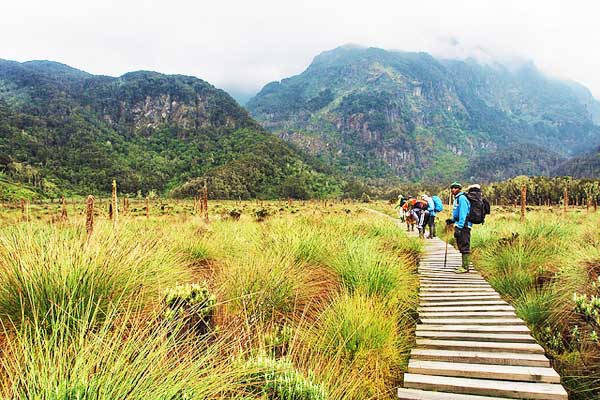 The trek to Margherita Peak generally takes about seven or eight days to complete.

This trek takes you up to the highest point of the Rwenzori Range - the third highest peak in Africa. While summiting this peak is an incredible experience, one of the biggest highlights of the trek is the trail itself.

The Kilembe route is a beautiful trail that leads you through the lush forest and diverse flora of the mountain. There are many spectacular viewpoints along the way that make for some brilliant photographic opportunities. 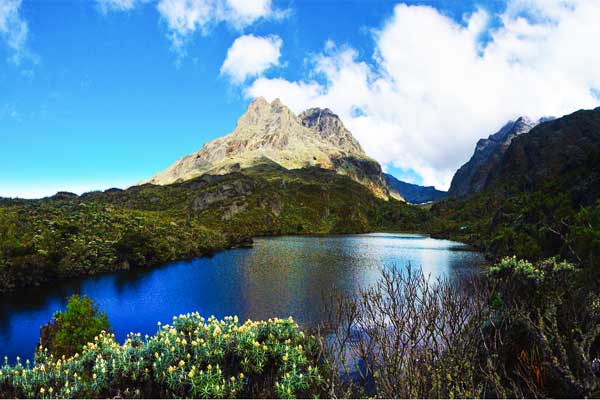 The Central Circuit is quite a challenging trek that takes about seven to nine days. It is considered the best way to experience the Rwenzori Mountains as it starts at Nyakalengija, circles around Mount Baker and ascends Mount Stanley and Margherita Peak.

The Central Circuit allows access to all summits that are open for ascent so it is a great route to explore if you're an experience climber. 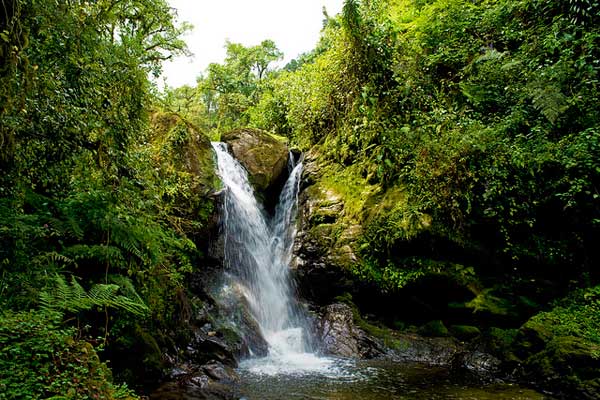 For beginner hikers, or people just looking to explore for the day, forest hikes around the foothills of the Rwenzori are ideal. There are multiple trails that lead around the thick forest that covers the lower slopes of the mountain range.

Forest hikes are walking trails and do not require any climbing so they are a perfect choice for everyone and anyone wanting to experience the natural beauty of the Rwenzori. These walks are also the best option for people wanting to see the wildlife in the area.

If you plan to hike in the Rwenzori Mountains, make sure that you are adequately insured for up to 4,000m. We recommend World Nomads. Use the calculator below to get a quick quote. 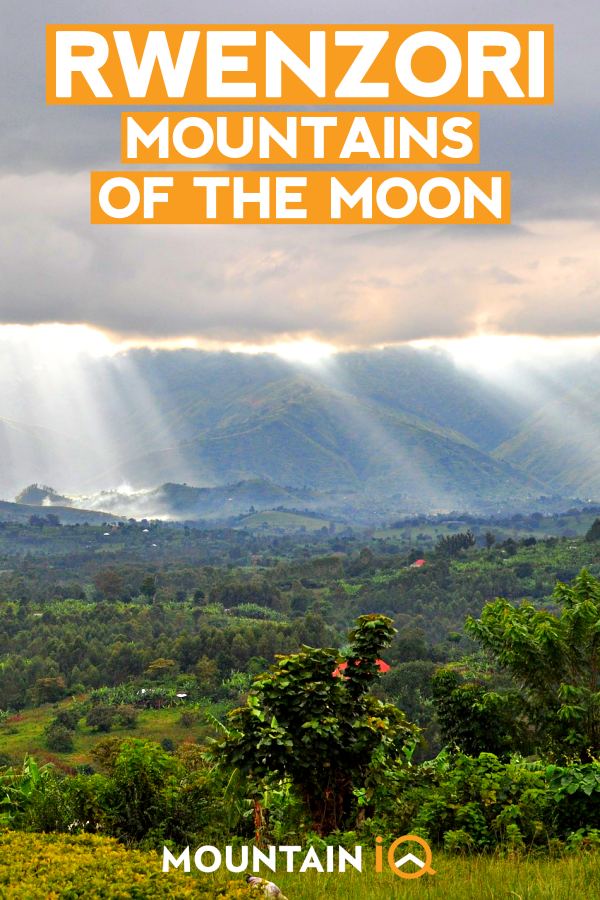