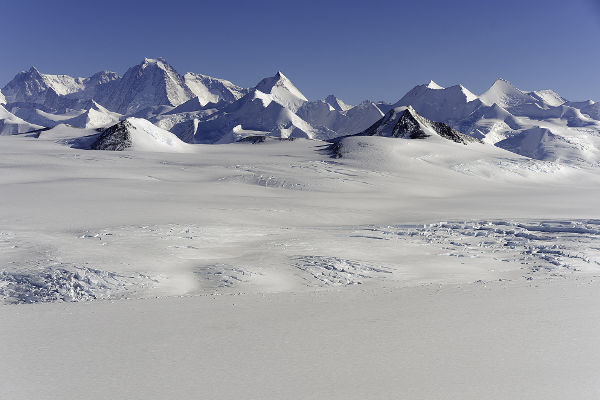 The Sentinel Range forms the northern portions of the Ellsworth Mountains in Antarctica. It contains the highest peak on the continent: the Vinson Massif.

The mountain range was discovered by Lincoln Ellsworth in 1935, who acknowledged its prominence in the vast fields of ice that characterise Antarctica by giving the range its appropriate name of Sentinel.

Check out this guide for a general overview of the Sentinel Range, including its most notable mountains and hiking spots.

The Sentinel Range was formed, along with the Ellsworth Mountain Range, after the breakup of Gondwanaland about 180 million years ago.

The Sentinel Range is mostly made up of folded, slightly metamorphosed sedimentary or volcanic rock dating from the Precambrian age to the Permian.

The formation began the deposition of sediment, most likely of marine origin. This resulted in a thick accumulation of sedimentary rock. Some sections of the range were the result of glaciomarine deposits, like the Whiteout Conglomerate.

The mountains then underwent a process of orogeny when the tectonic plate was uplifted and rotated which caused the continental crust to compress and fold. This shaped the Ellsworth Mountains into the general formation we see today.

The continental ice sheet of Antarctica covers the Sentinel Range and the Ellsworth Mountains and has contributed to the shape of the range through erosion.

Streams and glaciers have worn down and cut through sections of the mountains over many years, resulting in the formation of valleys.

The rock types in the Ellsworth Mountains can be divided into five groups, three of which make up the majority of the Sentinel Range: Crashsite Quartzite, the Whiteout Conglomerate and the Polarstar Formation.

The Sentinel Range is located northward of the Minnesota Glacier in Antarctica. The range is part of the Ellsworth Mountains, a long chain of mountains that spans in a north to south arrangement along the western side of the Ronne Ice Shelf.

The Ellsworth Mountains can be divided into two halves. The Sentinel Range makes up the northern half, while the Heritage Range forms the southern. The Minnesota Glacier cuts the mountains in half and forms the divide between the two ranges.

The Sentinel Range is much more prominent and noticeable than the Heritage Range as it consists of taller mountains, including the Vinson Massif - the highest mountain in the Ellsworth Mountains and Antarctica.

The range forms the southern curve of the Pacific Ring of Fire and some consider the Antarctandes to be a continuation of the Andes.

The climate of the Sentinel Range is very cold as Antarctica is the coldest continent in the world. The average temperature in the Ellsworth Mountains is -20˚F (-30˚C).

The best time for climbing in the mountain range is from December to February when temperatures increase to about -4˚F (-20˚C). This is the summer time in Antarctica where the sun shines for all 24 hours of the day.

Winters are extremely cold with temperatures plummeting to about -112˚F (-80˚C) in the interior land of Antarctica.

Due to the freezing climate and poor soil quality of Antarctica, very little vegetation has been able to grow and survive on the continent. Therefore ,plant diversity is also very low throughout the mountains.

Various species of mosses and liverworts can be found around Antarctica, as well as three different types of flowering plants, all of which are located in the Antarctic Peninsula.

There is little to no wildlife found in the Sentinel Range as there are very few animal species living in Antarctica.

The majority of the Antarctic animal species dwell near the coast as they generally rely on phytoplankton as a source of food, whether directly or indirectly.

The northern Sentinel Range appears to span from its northernmost reaches around Ravulya Nunatak down to the Embree Glacier.

The central section of the Sentinel Range is located around the Embree Glacier and leads into the southern section which ends around the lower Minnesota Glacier.

While the Sentinel Range is most famous for its Vinson Massif, which is part of the Seven Summits climbing challenge, it contains many tall peaks and rugged formations that are just as impressive.

Here are some of the most notable mountains in the Sentinel Range.

The Vinson Massif is a large, 21km long massif in the Sentinel Range that has the highest peak in Antarctica: Mount Vinson at 4,892 meters. The mountain is situated about 1,200km away from the South Pole and overlooks the Filchner-Ronne Ice Shelf.

Mount Vinson was first climbed by an American expedition team led by Nicholas Clinch in 1966. As one of the Seven Summits, the Vinson Massif has gained a lot of attention in recent years and poses an epic challenge for enthusiastic climbers. 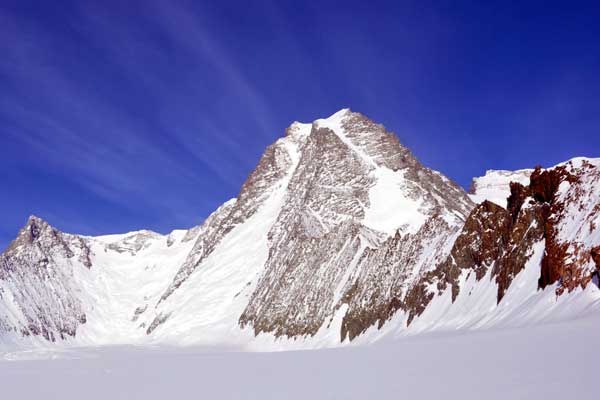 Mount Tyree is the second tallest mountain in the Sentinel Range and Antarctica with an elevation of 4,852 meters above sea level. It has only been summited a small number of times, the first of which was made by John Evans and Barry Corbet in 1967.

Like with most mountains, there are several routes that lead to the summit of Mount Tyree. However, the 2,000 meter high south face has never been attempted. 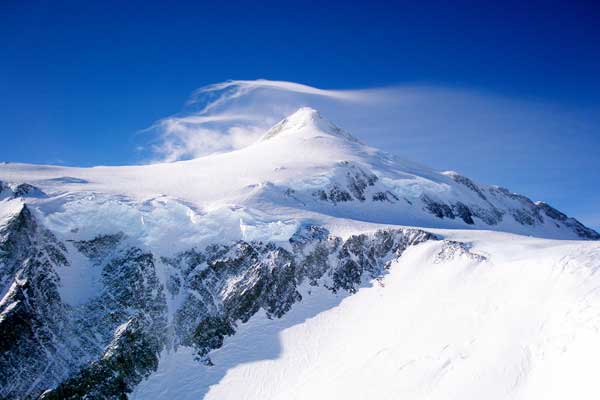 Mount Shinn stands tall with an elevation of 4,661 meters and neighbours Mount Tyree as it is located only 6km away from the second highest mountain in Antarctica.

The mountain was named after Lieutenant Commander Conrad S. Shinn, who was a U.S Navy pilot on some of the flights that first discovered the mountain and was the first to land a plane at the geographic South Pole in 1956. 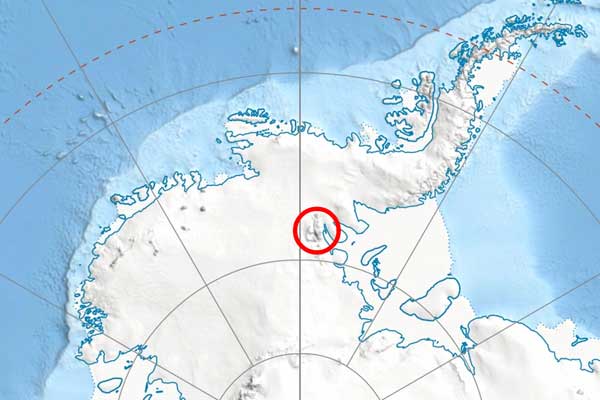 Mount Rutford is a jagged peak with an elevation of 4,477 meters, making it the highest point on the Craddock Massif.

The peak was named in 2006 after Robert Huxie Rutford, who was part of J. Campbell Craddock's expedition to the Ellsworth Mountains. 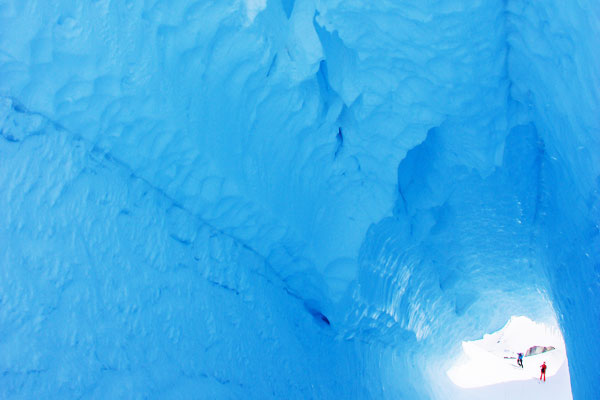 Mount Craddock is a large mountain that makes up the southern section of the Craddock Massif.

It has a height of 4,368 meters, making it the ninth tallest mountain on the continent of Antarctica.

The mountain was named after J. Campbell Craddock, who led the University of Minnesota's geological surveys of the Ellsworth Mountains.

Best Hike in the Sentinel Mountains

The Sentinel Range in Antarctica is a place for daring adventurers and experienced mountaineers to conquer new goals and truly challenge themselves.

The mountains in the range are by no means easy to climb or very accessible so treks need to be arranged and planned in advance with an experienced touring company.

As one of the Seven Summits, Mount Vinson is the most popular climb in the Sentinel Range.

It was the last of the Seven Summits to be successfully climbed due to its remote location. Mount Vinson offers hikers the chance to see and experience the barren, icy wilderness of the Antarctica.

Mount Vinson is rated as a moderately difficult climb, although it does not require much technical skill.

The climb usually takes between 16 days and 3 weeks to complete since extra days should always be accounted for in case bad weather conditions suddenly arise.

The best months to climb Mount Vinson are from December to February, which are the summer months when temperatures are slightly warmer and the sun is out 24 hours a day.

If you plan to hike in the Antarctica's mountains, make sure that you are adequately insured for up to 4,000m. We recommend World Nomads. Use the calculator below to get a quick quote.