The Appalachian Mountains are a massive system of mountains that are situated toward the eastern edge of North America - USA and Canada.

The mountain range is probably most famous for the iconic Appalachian Trail, which takes hikers on a 3,500 km journey from Maine's Mount Katahdin all the way to Springer Mountain in Georgia.

Check out this guide for a complete overview on the Appalachian Mountains with all the information you need to know and more about the range.

The shifting of tectonic plates during the Ordovician Period then resulted in a new subduction zone being created along the continental crust of North America. This caused uplift and altered the old sedimentary rock of the mountains, thereby forming the Appalachian Mountains.

The mountain range once reached heights similar to the Rocky Mountains and the Alps but were eroded down until they were almost flat before being uplifted by the tectonic plate movement, which allowed rivers to wear down the rock into the valleys and create the peaks that characterize the Appalachian Mountains today. These peaks only reach heights of 2,037 meters.

The Appalachian Mountains are made up of numerous different mountain ranges that create a chain of alternating valleys and ridges toward the eastern side of North America. They stretch from Canada all the way to Alabama in the United States, spanning a distance 2,400km.

The range consists of many rolling hills and lush valleys that are the result of years of erosion that wore down its tall, jagged peaks.

The Appalachian Mountains cross through many provinces, both in North America and Canada, as well as many cities.

Due to the vast length of the Appalachian Mountains, the range has a diverse climate that differs between the northern and southern reaches of the slopes.

The northern Appalachian Mountains are affected by the cold water from the Arctic, resulting in harsh, cold winters and mild summers. The southern sections of the range get hot summers and milder winters.

Both regions get a lot of rainfall, resulting in the lush forests and vegetation that cover the hills and valleys of the mountain range.

Most of the Appalachian Mountains are covered with forests, making it a valuable region for lumber and manufacturing paper. The forests consist of seasonal broad-leaf and needle-leaf trees as well as many evergreen trees.

Conifers, including balsam fir and red spruce, and hardwoods, such as birch and ash, can be found in the more northern sections of the mountains. Various types of Oak trees and evergreens cover some of the upper reaches and rocky ridges of the mountains, while heath fields, known as "balds", grow over others.

There are also many species of flowering and fruit-bearing plants that add to the beauty of the Appalachian Mountain scenery.

Various small mammals and several predators can be spotted in the dense forests of the mountain range. Beaver, raccoon, skunk and several species of squirrel can be seen in the forests, as well as black bear, gray and red fox, bobcat, coyote and red wolves. 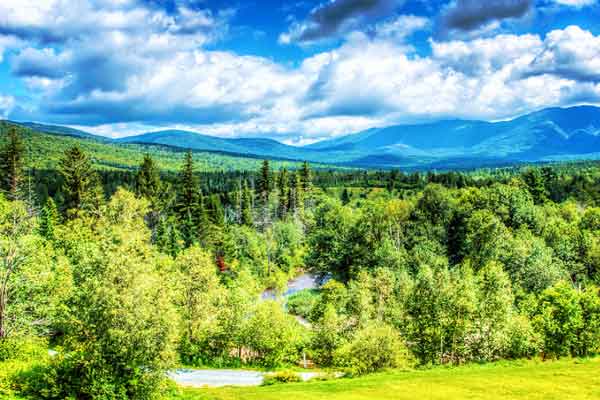 The Appalachian Mountains are divided into three main sections: Northern, Central and Southern. The Northern Appalachians span from Newfoundland and Labrador in Canada to the Hudson River.

Some of the highest elevations of the Appalachian Mountains are located in the Northern region. These include Mount Katahdin (1,606m) in Maine, Mount Washington (1,917m) in New Hampshire and various peaks in the White Mountains. 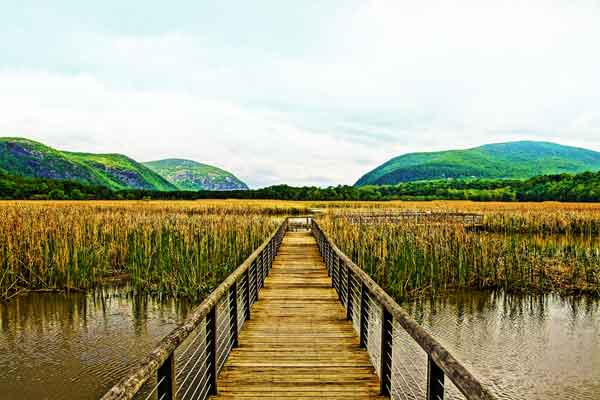 The Central Appalachians run from the Hudson Valley through to New River, which flows through Virginia and West Virginia.

This region is renowned for New York's Catskill Mountains, Pennsylvania's Poconos, the Allegheny Mountains and the Blue Ridge Mountains that span from Pennsylvania to Georgia.

The Appalachian Mountains are a massive expanse of rolling hills, valleys and rocky peaks. Thus, they are made up of multiple different ranges with many well known mountains and summits.

The mountains are all quite uniform in height within the different regions and ranges so there are no particularly distinctive summits.

Here are some of the most notable mountains within the Appalachian Mountain system.

Mount Mitchell is the highest summit in the Appalachian Mountains at 2,037 meters above sea level. It forms part of the Black Mountains in the Blue Ridge Mountain Range, which gets its name from the bluish hue it gets when viewed from a distance.

The mountain is located in North Carolina in the Mount Mitchell State Park. It was previously known as Black Dome due its round shape, but was then named after Elisha Mitchell, who explored the Black Mountains in 1835 and concluded that the range reached higher elevations than Mount Washington, which was considered to be the highest mountain east of the Rocky Mountains at the time. 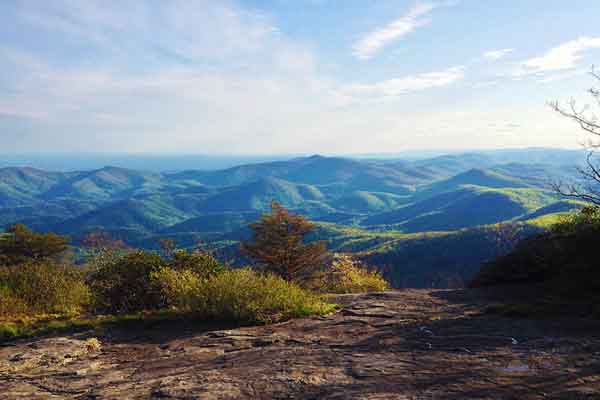 Springer Mountain also forms part of the Blue Ridge Mountains and is located in the Chattahoochee National Forest. It reaches a height of 1,155 meters and is regarded as the southern terminus for the Appalachian Trail and the Benton MacKaye Trail.

Mount Katahdin is located in Maine and is the highest mountain in the state at 1,605 meters. Penobscot Indians named the mountain Katahdin, which translates to "the Great Mountain".

The mountain is a rugged and steep granite massif that makes for a challenging climb. Mount Katahdin marks the northern end of the Appalachian Trail.

The first recorded ascent of Mount Katahdin was made by Zackery Adley and Charles Turner Jnr. in 1804. 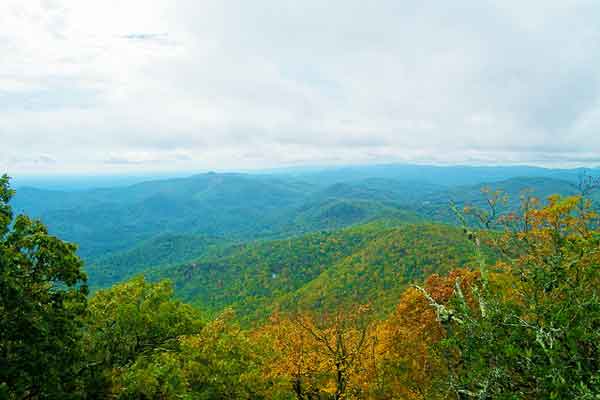 Blood Mountain sits at an elevation of 1,359 meters above sea level and is the highest point in the Georgia region of the Appalachians. It forms the border between Union County and Lumpkin County and lies within the Blood Mountain Wilderness and the Chattahoochee National Forest.

The exact origin of the mountain's name is unknown although there are some theories behind it. Some believe that it is called Blood Mountain because of a battle that took place there between the Creek and Cherokee Indians. Others theorize that its name came from the red-colored lichen that grows around the summit.

Roan Mountain is located in the southern region of the Appalachian Mountains and includes the longest area of grassy bald in the whole Appalachian range, as well as the biggest rhododendron garden in the world.

The mountain has five peaks, the highest of which is the Roan High Knob at 1,619 meters. The other peaks are Roan High Bluff, Round Bald, Jane Bald and Grassy Ridge Bald.

Notable Hikes in the Appalachian Range

Notable Hikes in the Appalachian Range

The most notable hike in the Appalachian Range is, of course, the famous Appalachian Trail. While the entire trail can take months to complete, there are plenty of shorter hikes along the way and popular sections of the trail that make for great day hikes and multi-day treks.

Here is some more information on some of the most notable hikes in the Appalachian Mountains. 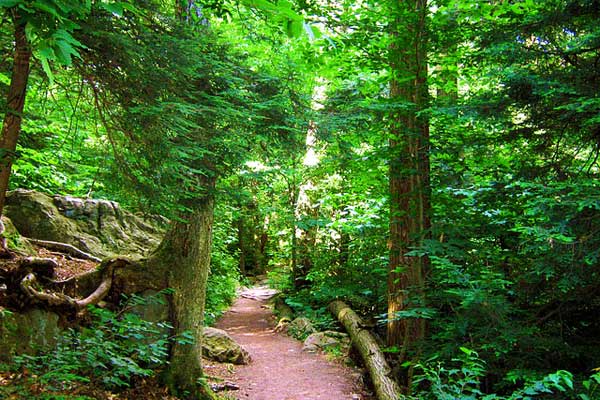 The Appalachian Trail is a world renowned trail that spans a total distance of about 3,500km down the eastern side of North America. The trail begins at Mount Katahdin in Maine and ends at Springer Mountain on the border of the Fannin and Gilmer counties.

The trail can take the average person anywhere between 5 and 7 months to complete, although experienced hikers have been able to do it in under 50 days.

While successfully trekking the Appalachian Trail is a massive accomplishment, most people opt to hike various smaller sections of the trail instead of attempting to complete the entire route. 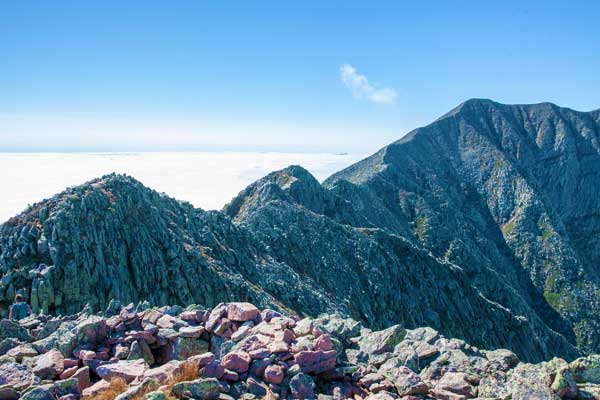 Mount Katahdin hike is a daunting and challenging climb for even the most avid of hikers. It marks the northern terminus of the Appalachian Trail and includes a strenuous, near vertical climb up to its highest summit, Baxter Peak, at 1,605 meters.

The hike takes between 8 and 12 hours to complete and requires you to scramble at certain points and trek over rocky terrain. The Knife's Edge, which is a narrow ridge connecting two of the peaks, is one of the most distinctive points on Mount Katahdin.

Despite the challenge it poses, the climb up Mount Katahdin is a popular trek and has been classified as one of the best summit hikes in the world according to National Geographic. 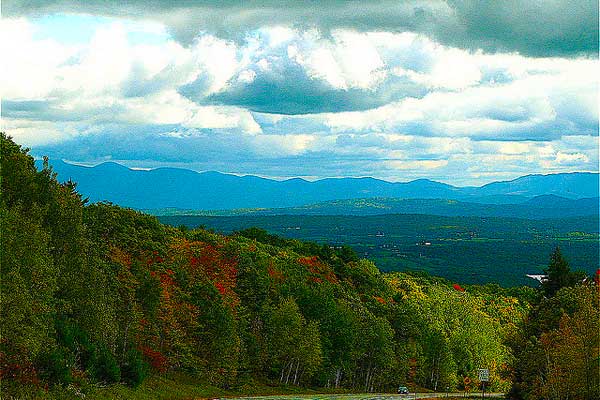 The hike is quite difficult around the summit but the views from the top make it worth every step. If you hike the trail in the autumn months you will be rewarded with stunning views over a landscape filled with red and orange trees. 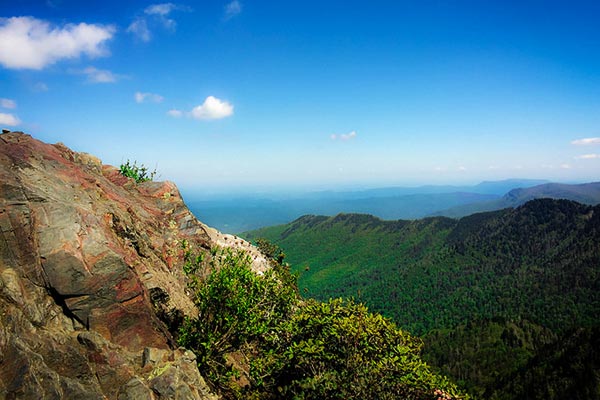 The trail from Newfound Gap to Charlies Gap is a 13km round trip hike in the Smoky Mountains Range of the Southern Appalachians.

The hike is quite strenuous and steep with an elevation gain of 1,640 meters. It takes you along a very rugged section of the Appalachian Trail where you will see breathtaking views on either side of the route.

If you plan to hike in the Appalachian Mountains, make sure that you are adequately insured for up to 4,000m. We recommend World Nomads. Use the calculator below to get a quick quote. 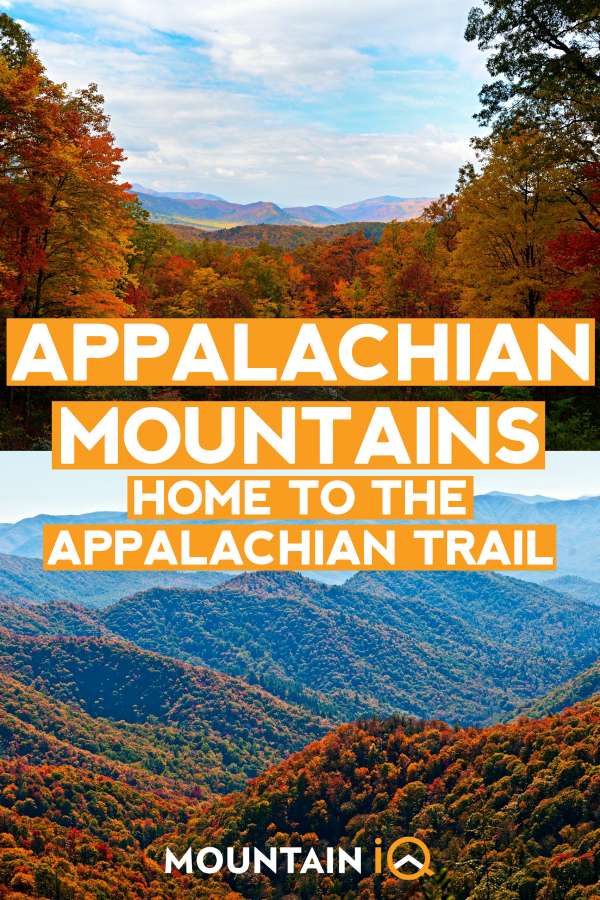