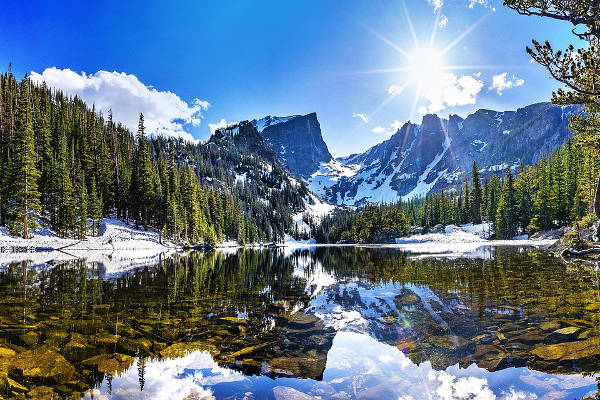 The Rocky Mountains, or the Rockies, are an enormous mountain range that span a length of about 4,800 km in western North America.

The Rockies form the divide between the Great Plains and the western USA and contain many of the greatest national parks in the country.

This guide includes all the information you need to know about the Rocky Mountains, including its most notable peaks and hiking spots.

The Rocky Mountain Range is made up of a set of discontinuous mountain ranges that have a distinctive geological history.

The core of the Rocky Mountains were formed over a billion years ago through colliding tectonic plates and the uplift of the continental crust.

The Rocky Mountains were shaped during a period of high tectonic plate activity, the last of which being during the Laramide orogeny approximately 80-55 million years ago. The rugged shape of the Rocky Mountains we see today is also the result of subsequent glacial erosion.

Different sections of the range have more distinctive formations due to the way the tectonic plates shifted in those areas. In the northern sections of the Rockies in Canada, the collision of the plates pushed and bunched up the mountains.

An unusual subduction shaped the Rocky Mountains in the U.S. This was a result of the Farallon Plate being subducted under the North American Plate at a shallow angle, which resulted in more friction and piled layers of crust on top of one another.

The Rocky Mountains are an extensive range of mountains that span all the way from Northern British Columbia in Canada to New Mexico in the United States of America. The range forms part of the enormous mountain system that is the Northern American Cordillera.

Some of the highest peaks in North America are found in the Rocky Mountains, including Mount Elbert (4,401m) and Mount Harvard (4,395m).

While there are numerous mountain towns located in the Rocky Mountains, the human population in the range is quite sparse with an average density of 4 people per sq km.

In a very general sense, the climate of the Rocky Mountains is considered to be a highland climate with wet, cold winters and warm, dry summers with thunderstorms. However, because the range extends for such a long distance and spans through different regions, its climate varies throughout its different sections.

The Canadian Rockies have more extreme and unpredictable weather conditions. Temperatures are dependent on elevation, dropping approximately 5˚C per 1,000 meters of elevation gained. The winter months are very cold with temperatures frequently dropping to about -22˚ F (-30˚C) and there is steady snowfall from November to March. Summer is from June to August with July being the hottest month as temperatures reach 86˚F (30˚C).

As the Rocky Mountains move further south into the United States, the climate becomes drier with less rainfall. Thunderstorms are common occurrences during the summer months from June to August. Spring has very unpredictable weather where it can sporadically change from hot to cold or wet to dry. The average winter and summer temperatures are 28˚F (-2˚C) and 59˚F (15˚C) respectively.

The vegetation in the Rocky Mountains varies between its different regions, elevations and exposure. Therefore, the Rockies can be divided into several biotic zones, which are characterized based on whether they can support tree life and whether there are any indicator species present in the zone.

There are two biotic zones in the Rocky Mountains that do not support trees: the Alpine tundra and the Plains. The Great Plains lie on the eastern side of the mountains and consist mostly of prairie grasses at low elevations. Scattered cedar and pine trees can be found on the eastern slopes but their growth is generally stunted and warped by the strong winter winds.

The Alpine tundra zone lies at higher elevations above the tree line on the mountains. Trees do not grow in this zone due to the high elevations and harsher conditions.

The Rocky Mountains have ten different forest zones. Junipers, pines and oaks can be found in the southern regions where the climate is warmer and drier, while Douglas firs, aspens, spruce and Cascadian species can be found in the colder, wetter climate of the northern sections of the mountain range. Unique forest zones can also be found around the rivers and canyons in the drier regions of the Rockies.

There is abundant wildlife in the Rocky Mountains. The range supports a number of well-known animals, such as elk, white-tailed deer, moose, mountain goat, mule and bighorn sheep. Numerous predators can be found in the Rockies including black and grizzly bears, coyotes, wolverines and lynxes.

Mountain Regions In The Rockies

The Canadian Rocky Mountains consist of the sections of the range the stretch into Canada. They also form the eastern segments of the Canadian Cordillera. The mountains in this region span from the Interior Plains in Alberta to north-east British Columbia.

Several high peaks are located in the Canadian Rockies, including Mount Robson at 3,954m and Mount Columbia at 3,747m.

The majority of the region is protected and conserved by national parks. Some of these parks have collectively been  designated a Wold Heritage Site.

The Northern Rocky Mountains stretch from the Canadian Rockies into parts of Montana and north-eastern Idaho. There are several national parks in this region where people can explore the natural beauty of the mountains. These parks include Glacier National Park, Banff National Park and Jasper National Park.

The Middle Rocky Mountain span through Wyoming, Utah and south-eastern Idaho. The region is separated from the Southern Rocky Mountains by the Wyoming Basin. There are many different ranges in the Middle Rockies, including the Wasatch, Teton and Absaroka Ranges as well as the Yellowstone Plateau. The highest peaks in this region are Gannet Peak at 4,202m and Grand Teton at 4,196m above sea level.

The Southern Rocky Mountains are situated in New Mexico, Colorado and southern Wyoming.

They mostly consist of two fold mountain belts that have been eroded down to expose their Precambrian rock cores. Three basins lie between the belts and are known as the North, Middle and South Parks.

This region contains some of the highest sections of the Rocky Mountains, including Mount Elbert at 4,401m and Mount Massive at 4,398m.

The Rocky Mountains are comprised of over 100 different ranges with many rugged peaks, 68 of which reach elevations higher than 4,000m. The top 30 highest peaks are all located in Colorado.

Here are some of the most notable mountains in the Rocky Mountain Range.

Mount Elbert is the highest peak in the Rocky Mountains and sits at 4,401m above sea level. The mountain is located in Colorado in the San Isabel National Forest.

The mountain was named after Samuel Hitt Elbert who was a statesman and the Governor of the Colorado territory from 1873-1874.

The first recorded ascent of Mount Elbert's summit was made by Henry W. Stuckle, who was part of the Hayden Survey, in 1874.

Mount Massive is the second highest mountain in the Rockies with its peak reaching 4,398m. The mountain is situated in the Mount Massive Wilderness in the San Isabel National Forest.

It was named Mount Massive after its elongated shape and long summit ridge between its high peaks that gives it more area above 4,000m than any other mountain in the U.S.

The first ascent of Mount Massive was credited to Henry Gannet, who was also part of the Hayden Survey, in 1873.

Mount Harvard is the third highest mountain in the range with an elevation of 4,395m, falling only slightly short of Mount Massive.

The mountain was named in honour of Harvard University by the members of Harvard's first Mining School class. The class went on an expedition in the mountains with their professor, Josiah Dwight Whitney, after whom Mount Whitney is named.

The first recorded summit of Mount Harvard was made in 1869 by S. F. Sharpless and William M. Davis, who were members of the class.

At 3,954m, Mount Robson is the highest mountain in the Canadian sections of the Rocky Mountains. It lies within the Mount Robson Provincial Park in British Columbia and forms part of the Rainbow Range.

The first recorded summit was made by A.H. MacCarthy, Conrad Kain, and W.W. Foster in 1913.

Notable Hikes in the Rockies

There are many hiking trails and national parks to explore in the Rocky Mountains. The range is a hiker's paradise with many different sections to trek through and endless breathtaking sights to see.

For the full list of the best hikes in the Rocky Mountains see this article.

The Highline Trail is located in Glacier National Park in Montana. It is a popular day hike that is generally hiked one way. The trail is a difficult 11,4 mile journey that can be done at any time of year.

One of the best highlights along the trail is the Garden Wall, or the Continental Divide, which offers stunning views of the glaciers and the beautiful scenery of the park.

The ascent of Mount Ida is a very popular climb in the Rocky Mountain National Park. It is a strenuous 9.6 mile round trip journey that treats brave hikers to the most breathtaking views of the national park.

The hike takes about 5 to 6 hours to complete and has a well marked and maintained trail. The more difficult trail leads you through a large boulder field which can pose quite a challenge, while the other trail leads around it.

From the summit, at 3,921 meters, you will be able to see the vast stretches of the Rocky Mountains as well as the beautiful Grand Lake and the Shadow Mountain Lake.

The hike to Chasm Lake is a beautiful 9 mile long round trip hike that leads to a stunning lake in the midst of all the rocky terrain.

From the lake you can see picturesque views of Long's Peak, which is especially spectacular if you catch it at sunrise. This hike is perfect for intermediate hikers and people looking for some incredible photographic opportunities.

If you plan to hike in the Rocky Mountains, make sure that you are adequately insured for up to 4,000 m. We recommend World Nomads. Use the calculator below to get a quick quote.

Where do the Rocky Mountains start and end?

The Rocky Mountains span all the way from British Columbia in Canada to the southwestern sections of New Mexico in the United States.

What type of rock are the Rocky Mountains?

What states do the Rocky Mountains cover?

The Rocky Mountains span through Colorado, Arizona, Idaho, New Mexico, Montana, Utah, Nevada and Wyoming. These states are known as the "Mountain States".

How long are the Rocky Mountains?

The Rocky Mountains are an enormous mountain range that span a length of about 3,000 miles / 4,800 km. 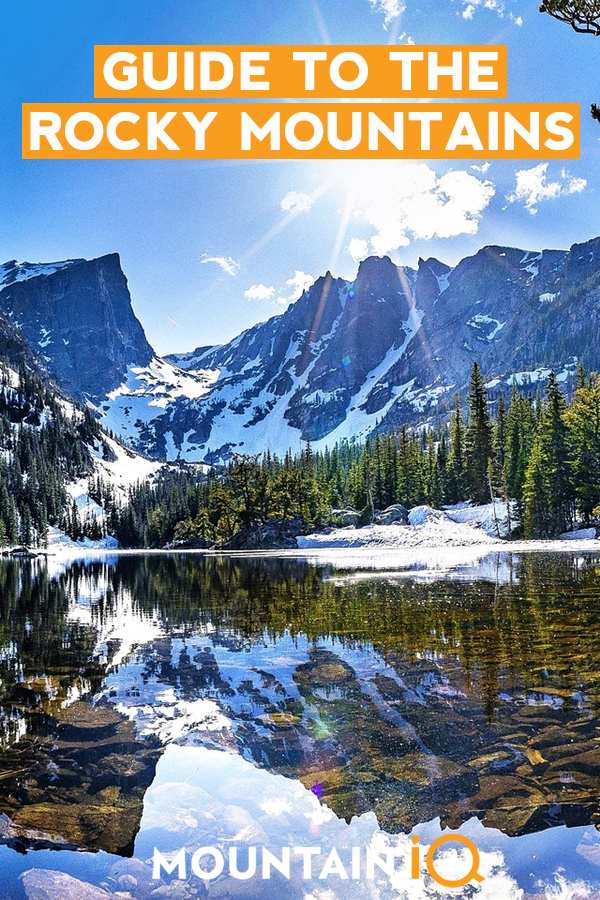