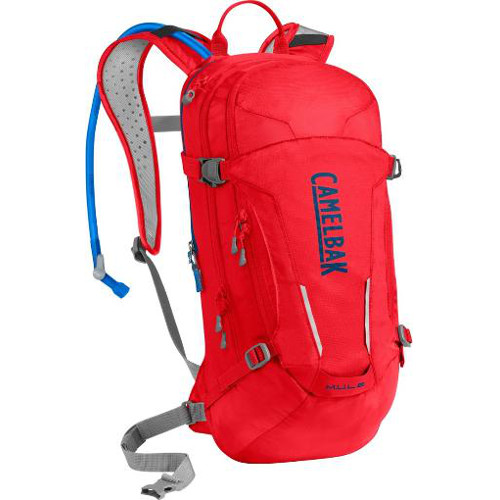 CamelBak are well known for their industry leading hydration packs, and they’re definitely one of the more well established brands, turning 30 years old this year.

Some activities call for extra water to be carried, whether it’s just to beat the heat of the day or you just want a convenient way to access your water through the use of a hose.

So, if you’re in need of a hydration pack, then CamelBak is the best place to look, and their M.U.L.E.pack is currently our favourite one from them.

In our best hiking daypack buying guide we awarded the M.U.L.E. our best hydration pack award, for obvious reasons. We found this pack to be best used in shorter, faster paced activities where hydration is vital in order to defend yourself in hot climates; ideal for mountain biking and trail running. So if that’s what you’re after, then look no further. 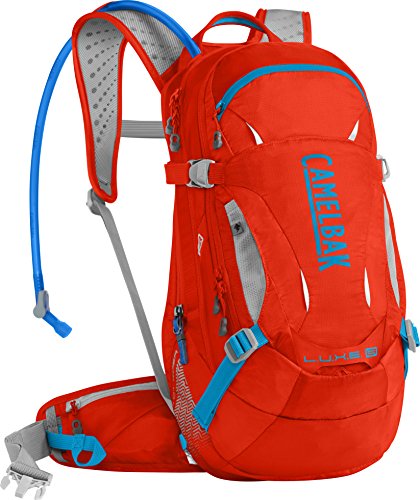 The CamelBak M.U.L.E.isn’t the largest CamelBak (or hydration pack in general, for that matter), but the 3L reservoir and 9L of extra capacity more than satisfies its purposes.

The reason we chose this as our favourite hydration pack is that it is more of a speciality hydration pack than a lot of others on the market, and still scored well across the board (except, obviously, for its capacity).

What we mean is that most of the best daypacks these days are hydration compatible, and often we find that hydration packs that double as general use packs with a lot of extra capacity, fall short when compared to those daypacks that they’re competing with.

So it’s nice to have a small hydration pack that is just that, a hydration pack. If you want something with a larger capacity that is also hydration compatible, you’re probably better off looking at something like the Osprey Talon 22.

While this pack didn’t exactly excel at many things, it was above average in almost every category (except, once again, for the size).

The Crux hydration system is probably the most efficient and easy to drink from systems out there, which is why we favour CamelBaks so much.

The ventilation of the back panel was top notch, which was another thing that we think is vital in a hydration pack that is built for speedy and hot activities.

The main thing that really hurts this pack, however, is its lack of versatility. That 9L capacity means that it can barely be used for activities that last for more than half a day, or any activity where you have a lot of gear to carry.

So, if you’re willing to invest in one of these then don’t expect it to replace your larger daypacks.

Secondly, we found the whole process of refilling the reservoir a bit overcomplicated; especially trying to put get it back into the pack without it slouching to the bottom.

We figured it out with a bit of effort, though, so it wasn’t that serious.

As we’ve already made pretty clear, we think the small capacity is both a bit of a pro and a con for the CamelBak M.U.L.E.; its smaller design makes it better than other packs for high-octane activities, but then it also means it can’t be used for a large variety of more time consuming activities.

The 3L reservoir is plenty and is as big as you’ll generally get in any hydration pack. The 9L of space is convenient depending on your own needs; people who don’t need as much gear will appreciate the smaller and lighter design, but you won’t find much use outside of that.

As for the weight of the M.U.L.E., it’s pretty average at 595g when empty. It’s heavier than a lot of other small daypacks, but then it offers more comfort and functionality than those packs. It’s definitely light and small enough to not worry you when you’re out on the trails, especially since you won’t be able to pack it too heavy with that small capacity.

The M.U.L.E.’s back panel is CamelBak’s Air Director design that creates air channels between your back and the pack. It’s essentially just mesh stretched over firm foam, with a channel running down the middle.

We found it to have perfectly sufficient ventilation for both your back and your shoulders, so sweating too much shouldn’t be a huge problem except for those more extreme conditions.

We found the M.U.L.E. to be comfortable enough for a small pack, as long as you don’t load it too heavily. The hipbelt is a bit weak, but then again you don’t need too much support when you’re only carrying about 5kgs of weight on your back.

We’d recommend not trying to go any heavier, as the lack of support from the hipbelt will start to become noticeable, even though the shoulder straps are well padded and comfortable.

This small hydration pack offers most of the attachment options that you’ll need within its purposes. The hydration system’s hose has a magnetic trap that sticks it to your shoulder so it doesn’t flop around, and the Crux system also delivers 20% more water per sip than other designs (according to CamelBak, and we can confirm that it’s easy to drink from).

There is a separate zippered compartment on the side that has a gear and tool organiser which comes in use for mountain bikers. The built in helmet hooks also allow for easy access to the inside of the pack while a helmet is attached.

The M.U.L.E. has a narrow and ergonomic design, further pushing its intended use being for faster activities, as it sits comfortably between your shoulders and won’t cause your centre of balance to shift too much when taking corners quickly.

It’s made from some fairly tough nylon, and it held up well during our testing period. It does not, unfortunately, come with a rain cover, so don’t expect the gear inside to be well protected from the elements unless you spend the extra $15 or to get a rain cover.

The M.U.L.E. is definitely a well-made hydration pack all-in-all; as are most CamelBak products.