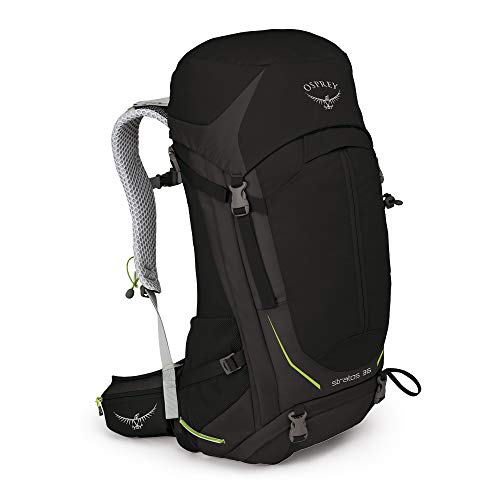 The Osprey Stratos 36 is a large daypack, filled with all the features you’ll need to get through a full day of hiking and even through the night. It’s comfortable, has plenty of space and versatile enough for a variety of activities.

So, if you need a larger daypack to carry a lot of gear and to get you through the night, then the Stratos is our favourite pack for just that!

In terms of raw features and functionality, there isn’t much missing from the Osprey Stratos 36. It has 7 exterior pockets, including pockets on the hipbelt for the convenient storage of a smartphone, small GPS or some food. The 36L capacity is more than enough to carry all of your necessities and more, so you’ll never have to sacrifice taking something on your hike because you’ve run out of space.

The compression and suspension design used by Osprey for this pack is effective, and you won’t feel any discomfort carrying even up to 14-15kgs. We did notice, however, that when you load it heavily the pack tends to lean backwards. That makes it a bit less comfortable when you want to hike quickly, but otherwise it didn’t bother us too much.

One of the biggest missing features that we took notice of was the side stretch-mesh pockets that were mostly unreachable. While that’s never ideal, the pack is at least hydration compatible, so you can install a 3L reservoir (if you’re willing to spend that extra $35 or more). One small issue here is that the hose from the reservoir tended to squeak as it rubbed against the material of the slot that it fit through. We’ve heard from others that they had the same experience, but it’s not quite a deal breaker for us.

The Osprey Stratos 36 is on the larger end of the daypack spectrum. We generally find that capacity preferences are entirely down to your own opinion, so that always makes it difficult to make a recommendation based on size. However, in general, we find 36L packs to be less versatile as daypacks than smaller ones, like the 22L Osprey Talon.

Having such a large capacity and all of those features does come at a price in terms of extra weight. Weighing in at almost 1.5kgs, this is definitely one of the heavier daypacks that we’ve tested. Most of that weight comes from the extra padding and the ventilation designs on the back panel and shoulder straps. But, if you compare it to the amount of gear you’ll be carrying, and the excellent suspension and compression design, you won’t notice the pack being heavy at all.

The AirSpeed design of the back panel, which is a curved design that holds the pack away from your back, is brilliant. It’s one of the most breathable designs that we’ve ever tested, much like the AirScape design was on the Osprey Talon 22 that we also rated highly. The meshed and padded shoulder straps are also breathable, making this pack one of the best large packs for anyone who sweats a lot.

As we mentioned earlier, the suspension design implemented in the Stratos 36 is extremely effective. At least up until that point when you overload it and it starts to lean away from your back slightly (which might actually be a side effect of the back panel design). In general, we wouldn’t recommend overloading any packs, as they aren’t designed with that in mind, but especially with a large pack like this. You could cause yourself some injury if you load it too heavily and then hike for long periods because of that extra strain on your back. Other than that one thing, this pack was a dream to carry for long periods, even with up to 15kgs packed in.

A large, 36L pack like this one is about as functional as you get for the more demanding hikes. The hipbelt pockets that we mentioned previously are always useful, especially because of those mostly unreachable side mesh pockets. There are a number of attachment options available, covering all of your needs: Stow-On-The-Go trekking pole attachment, LidLock helmet attachment, an ice-tool loop, and an included rain cover.

As with all large daypacks, you won’t find as much day-to-day use around the city as you would with a smaller pack. The Stratos 36, however, works just as well for short hikes where you don’t need to fill it up with gear as it does for full day hikes. We would still recommend a smaller pack like Osprey’s Talon 22 for shorter activities and other general use, but the Stratos 36 is still good enough if you absolutely need a larger one.

The design of the Stratos 36 is elegant, and as we mentioned before, features one of the smartest and most effective back panel designs we’ve yet tested. It’s made from thick, tough 210D nylon, with 420HD nylon accents and bottom padding.

The pack held up well against everything we could throw at it during our testing period, and that included rain cover was effective enough to keep most of the water out for extended periods of time. Overall, we found the design to be well thought out, with almost of the attachments that need to reachable being reachable, except for those side mesh pockets.

Did you find this article useful?