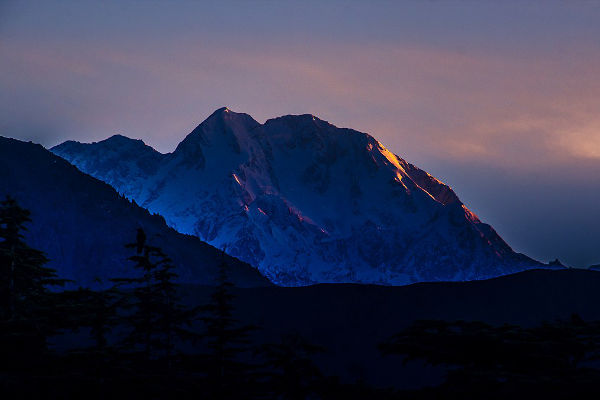 The Hindu Kush, located in central Asia, is a formidable mountain range, home to many of the world’s highest peaks outside of the Himalaya and Karakoram ranges.

The highest point is Tirich Mir, which reaches a staggering height of 7,780 m above sea-level.

With unique topography, wildlife and scenery, visiting and hiking in the Hindu Kush is truly a once in a lifetime experience.

This is a guide of the important facts about the range, including the most notable mountains and hikes.

Rooted in the formation of a subcontinent from a region of Gondwana that drifted away from east Africa about 160 million years ago, around the middle Jurassic Period.

The range remains geologically active and is still rising. It is prone to earthquakes.

The Hindu Kush stretches near the Afghan-Pakistan border, from central Afghanistan to northern Pakistan. Here, you will find numerous snow-capped peaks, which diminish in height as you move westwards.

There are a number of high passes transecting the mountains, forming a strategically important network for the transit of caravans. The most important pass is the Salang Pass at 3,878m above sea-level.

Glaciers can be found in the Hindu Kush with the mantle of snow and ice being heaviest at the extreme eastern end, the Chiantar Glacier can be found here. Glaciation becomes more sporadic as you move westwards. Some glacial regions have a striking feature known as ablatel snow hammocks, which is a formation which gives the illusion of kneeling human figures.

There are many rivers, such as the Helmand River, the Hari River and the Kabul River.

The Hindu Kush has great variations in climate.

Most of the eastern parts of the range rises up at the extreme western limit of monsoonal Asia, meaning it experiences rainy and snowy summers (July-September) and dry winters.

Forests can be found on the southern slopes of the eastern and central Hindu Kush as it experiences abundant winter snowfall and intermittent precipitation in the summer monsoon.

In the northernmost mountains in Pakistan’s Chitral District and Gilgit District, precipitation on the lower slopes is sparse, hence forest vegetation is limited to the occasional juniper and birch.

Large strands of deodar, cedar and blue pine can be found on the central and eastern spurs of the Hindu Kush.

In the western Hindu Kush, forest is almost absent. Cultivated fodder trees such as poplar, willow and Russian Olive predominate.

Meadowland is intermittent, depending on the sunny and shady exposure. Substantial pastures can be found on the slopes where snow accumulates.

Undulating grassland, called Pamir, occur above the treeline in the eastern Hindu Kush.

The northern slopes are sparse and in the inaccessible reaches of Nurestan, deodar forest can be found.

Well-adapted wildlife species can be found throughout the mountains.

Siberian ibex and markhor negotiate the high crags, while Marco Polo sheep and urial are occasionally found in the high Pamir.

Black and brown bears can be found in isolated valley.

The Chitral Valley Wildlife Preserve is home to the endangered snow leopard.

There is also rich birdlife in the Hindu Kush.

The mountain range is separated into three sections; The western, eastern and central Hindu Kush. 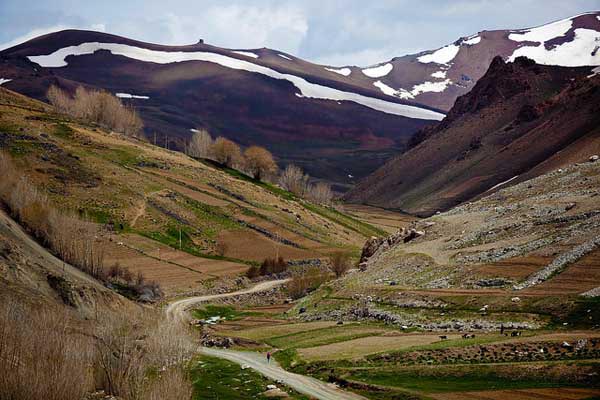 Rises over 5,100m above sea-level and stretches between Darra-ye and the Shibar Pass in the west and the Khawak Pass in the east. 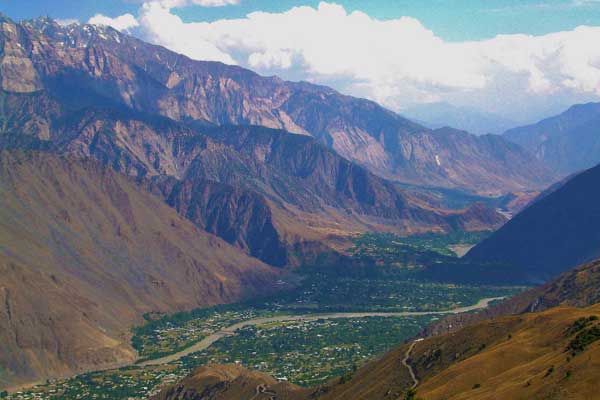 This section rises over 6,800m and has various spurs between the Khawak Pass in the east and the Durah Pass (Dorah) in the west. 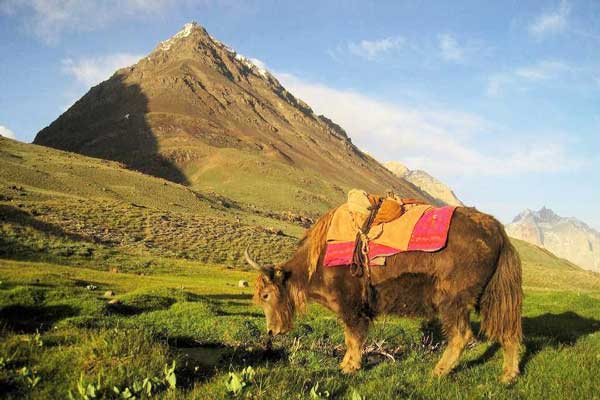 This section is the highest with peaks rising over 7,000m above sea-level. It extends from the Durah Pass to the Baroghil Pass at the border between northeastern Afghanistan and north Pakistan.

Notable Mountains in the Hindu Kush

The Hindu Kush range contains some of the world’s highest mountains outside of the Himalaya and Karakoram ranges. Most of its peaks are between 4,400m and 5,200m above sea-level with some much higher.

Here is a list of the most notable mountains in the Hindu Kush.

Tirich Mir, 7,708m above sea-level, is the highest mountain in the Hindu Kush and the highest in the world outside the Himalaya-Karakoram ranges.

It is located in the Chitral District of Pakistan and was first summitted in 1950. 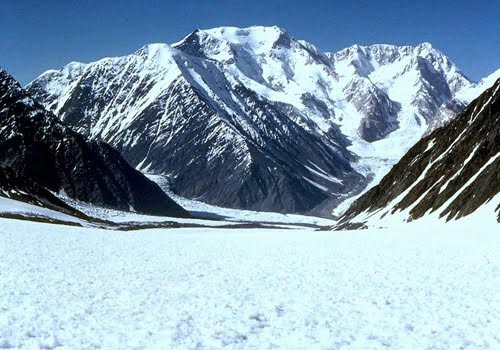 Noshaq or Noshak  is the second highest mountain in the Hindu Kush and stands at 7,492m above sea-level. It lies on the border between Pakistan and Badakhshan Province in Afghanistan.

It is the highest point in Afghanistan and the world’s most western 7,000m massif. Noshaq was first climbed in 1973. 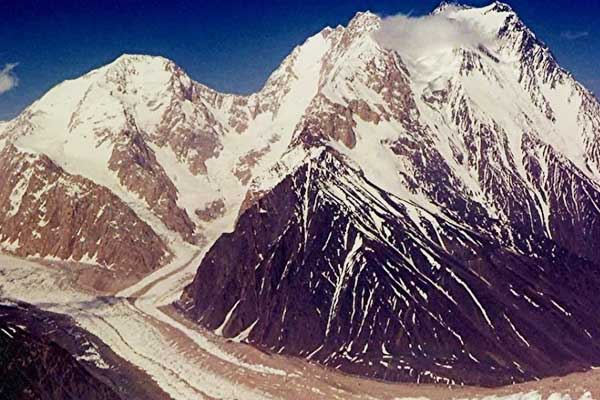 Istor-O-Nal is the third highest mountain in the Hindu Kush and stands at an impressive 7,403m above sea-level. It is the 68th highest independent peak in the world and is located in the Chitral District in Pakistan, a few km northeast of Tirich Mir. 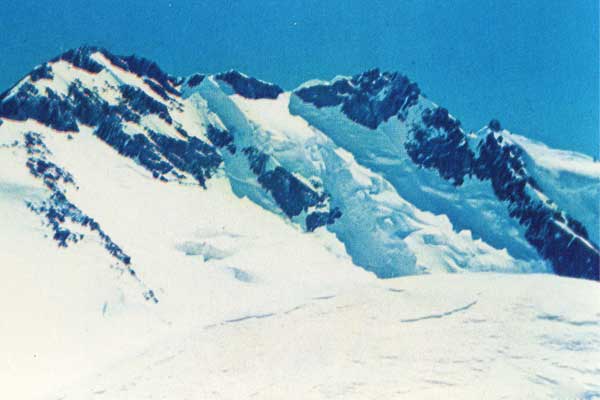 Saraghrar is the 4th highest mountain in the Hindu Kush and is 7,338m above sea-level.

It is located in Khyber Pakhtunkhwa and was first summited in 1959. 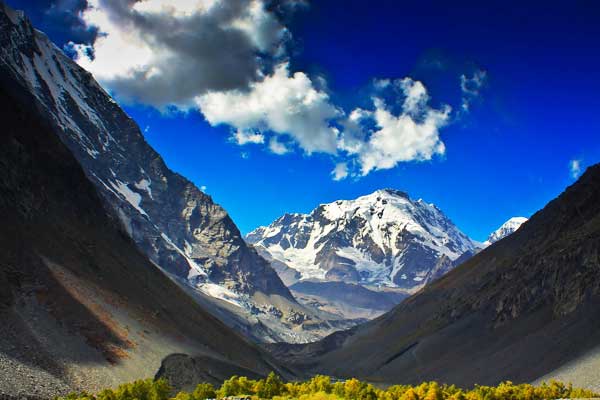 Udren Zom stands at 7,140m above sea-level, making it one of the highest peaks in the world outside of the Himalaya-Karakoram ranges.

It is in Khyber Pakhtunkhwa.

Notable Hikes in the Hindu Kush

Trekking through the Hindu Kush is an incredibly unique experience. The best time to trek here is in the summer months between June and September. You will be camping along your trek with nights spent in hotels before and after your trek.

There are many tour agencies conducting treks in the mountain range and it is recommended that you work with one of these agencies as treks can be quite challenging and technical and having an experienced guide is essential. 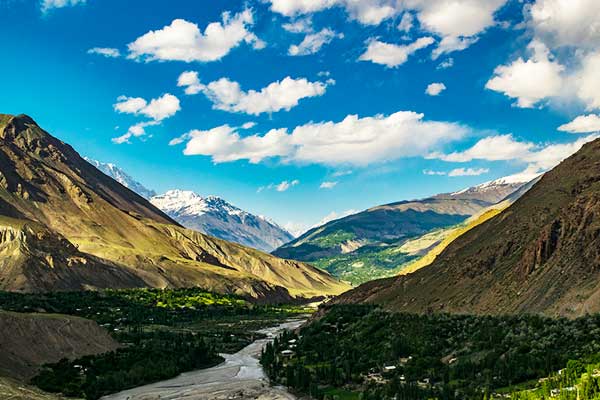 This demanding trek takes you right into the high Hindu Kush mountains to the base camp of Tirich Mir, known as Babu camp, situated at 4724m above sea-level.

Along the route you will encounter impressive 7000 peaks such as Noshak, Istor-O-Nal and others.

The trek takes between 8 and 9 days and is demanding, so a good level of physical fitness it required. 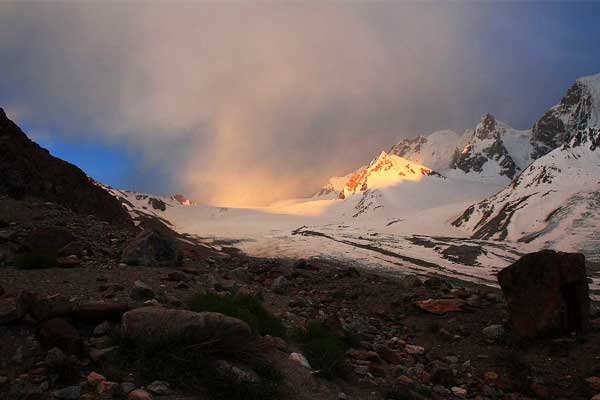 The Darkot Pass Trek is a moderate to demanding trek and you can expect tobe walking for just under two weeks.

This is a magnificently unspoilt area and one of the classic treks from Chitral to Hunza. The trek takes you past Tirich Mir and the central Hindu Kush mountains.

You will start the trek walking through lush valleys and then move to a more rugged landscape and a glacier crossing before you take on the two high passes, Darkot Pass (4757m) and Atar Pass (4590m).

This trek promises the best mountain scenery and builds up nicely from Yarkhun Valley to acclimatize you. 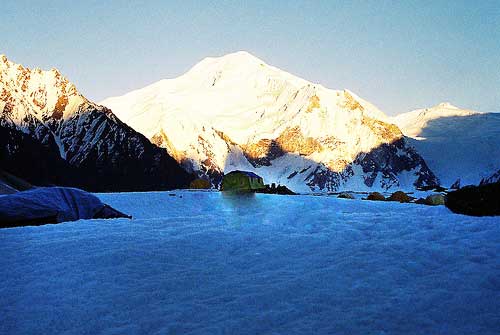 The short trek over Ovir Pass on the southern flanks of Tirich Mir, should take just less than a week to complete.

From the pass you will have panoramic views of the mountains in either direction. The trek builds up through friendly villages, where you’ll have the option to do a shorter 4-day trek or a longer 6-day trek, depending on which side you start from. 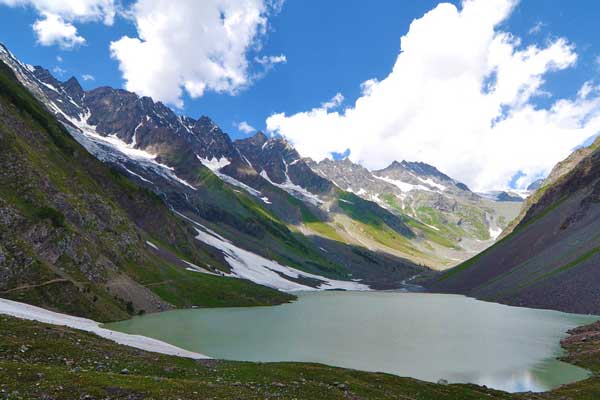 Three Passes of Ishkomen trek is classified as moderate to challenging, and you will spend around 15 nights camping and a few days in a hotel depending on which tour operator you go with.

The trek starts from the Asumbar Village of Ishkomen and takes you along some of the most beautiful and high passes.

You have the opportunity to meet unique tribes along your journey.

You will trek through historical villages, beautiful lakes and incredibly high mountains.

If you plan to hike in the Hindu Kush, make sure that you are adequately insured for up to 4,000m. We recommend World Nomads. Use the calculator below to get a quick quote.

What does Hindu Kush mean?

According to one translation, the name 'Hindu Kush' translates to 'Hindu-killer' as many Hindu slaves died while crossing the mountain on their way to Turkestan. Other meanings of the name include 'sparkling snows of India' and 'mountains of India'.

How long is the Hindu Kush mountain range?

Are the Hindu Kush part of the Himalayas?

Yes, the Hindu Kush form part of the westernmost portions of the Himalayas, Karakoram and Pamir Mountains. 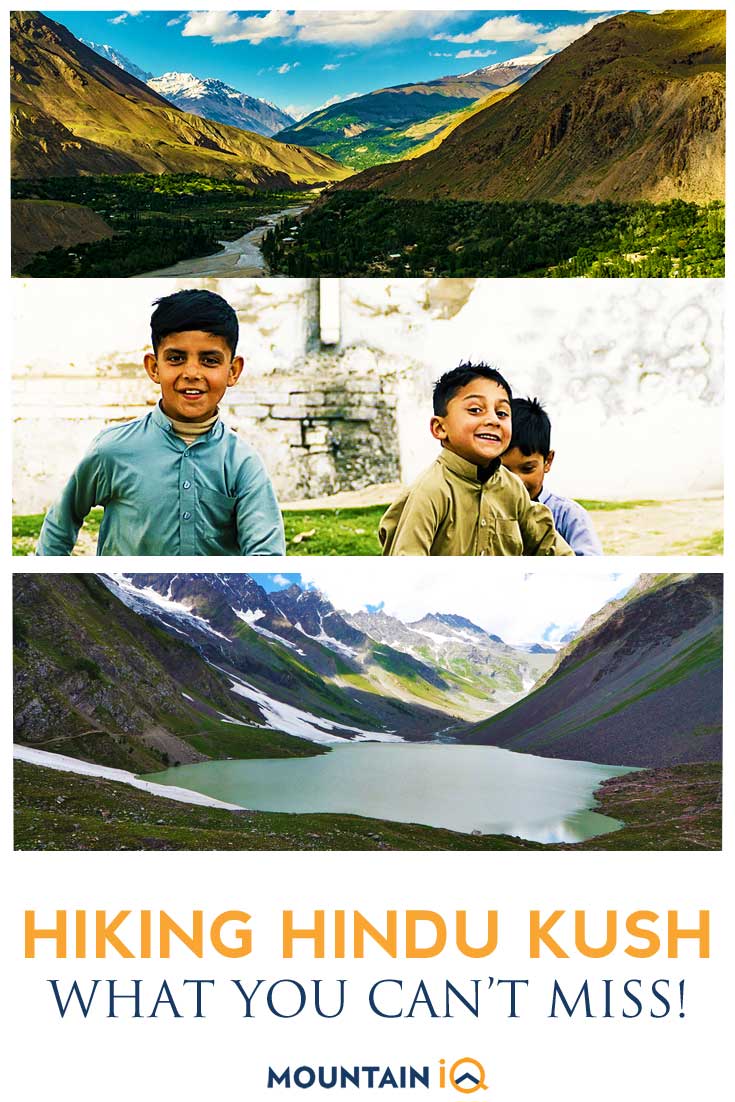