In 2009, Irish National, Fergus White, travelled to the Himalayas to train as a mountaineer.

The following year he returned to climb Everest. In this interview Fergus shares his story from Pumori to the summit of Everest.

His book, Ascent in Hell, published in 2017, is a personal and revealing account of his Everest climb.

What preparation and training did you do for Everest?

Six months before the Everest attempt, I went on a one month expedition to the Himalayas. We were based on the 7,100m Mount Pumori, which is located 5 miles from Everest. It was a training climb under instruction, but in a real and dangerous environment; over the years only 485 climbers have made it to the top of Pumori, with 42 dying in the attempt.

It was a harsh introduction to the effects of thin air on the human body, which is a critical factor in high altitude mountaineering over an extended period. Day to day we worked on climbing with crampons, ice axe use and self-arrest, fixed rope and jumar use, rappelling, arm rappelling, avalanche awareness, rock climbing, and rope work.

Also crucial was improving general camp-craft skills: living in Spartan conditions, being self-sufficient, planning food and water requirements, loading a pack efficiently, and sleeping in tents on a knife edge ridge while attached by a waist harness to the glacier.

From a general fitness point of view in the year leading up to Everest it was a combination of running 10km a few times a week, or hiking up hills with about 20 kg in a backpack. So just general aerobic fitness and trying to build up leg strength.

Tell us a little bit about your mountaineering history pre-Everest?

Before Pumori, I‘d no mountaineering experience. I’d always kept myself in shape either cycling or running. With a light frame, I was somewhat of a natural climber in terms of nipping up a tree to retrieve a football, but I was not a mountaineer.

The first time through, with a heavy pack and being only acclimatised to Base Camp altitude (5,350m), was nothing short of brutal. I thought the pack was going to pull me off some of the vertical sections. I don’t think there was a moment when I wasn’t gasping in the thin air climbing up through the Icefall.

It’s sort of like being in a claustrophobic white maze, with apartment sized blocks of ice threatening on all sides. Once ¾ of the way up, I wasn’t certain I’d make it to the top or that I could retreat and make it all the way back to Base Camp if necessary.

We’d set out at 6am, but had made pitiful progress before the sun found us. Under its rays the temperature soared, and dehydration and exhaustion became a certainty. It took us eight and a half hours to get through the Icefall, and then another one and a half hours to reach Camp 1. At that stage, I couldn’t see how I’d get anywhere near the summit.

For our second climb up the Icefall a week later we set off at 4:30am. With a lighter pack, being familiar with the route, having higher levels of acclimatisation, and avoiding the draining effects of the sun, we got through the Icefall in four hours.

Well, the higher up you go, the more dangerous the environment. The air has scarcely enough oxygen to allow us to think straight. Our digestive systems are shutting down. We’re losing weight fast. Team members are getting ill around us and dropping out. One of the lad’s mental capacity fails him (not uncommon in thin air) and he’s forced off the team for his own safety. We run low on provisions. We come across the body of a climber who’d died the previous day.

Sixty five straight hours in the death-zone, some of it without an oxygen tank. Three frigid nights at Camp 4 at 7,950m. You get used to taking a beating, and convince yourself that “just a little bit more” and all this suffering will deliver success.

As for summit night, I couldn’t do it justice in a short interview. It’s like nothing on earth; it’s like some sort of a dream sequence. It’s scary, freaky, and cold. A twelve hour slog by the light of a head torch, with a brain that is slowly crumbling. A level of exhaustion that I didn’t think a human body could take and still function.

I know that many who make it to the top and back report that they did it by the skin of their teeth; that would have been a luxury. There’re no words to describe the effort that it took to reach the top, and then after a brief rest, to get back to Camp 4.

What advice would you give to someone who aspires to climb Everest one day?

It’s a somewhat loaded question. The obvious answer is to be a great mountaineer over a lifetime: start with small local climbs, then self-sufficient weekends away, book in for skills training courses with local mountaineering clubs, then longer Alpine adventures above 4,000m, and then month long Himalayan expeditions touching 8,000m peaks. All of this performed in the company of other mountaineers, and all the time one’s skills are honed and one’s equipment becomes more personal.

Doing the above will turn someone into a skilled, self-sufficient climber, but it will take years, is expensive, and is no guarantee at all of reaching the summit of Everest. Of course, if you’re enjoying mountaineering, then it doesn’t matter how long it takes, and most hobbies have a habit of burning up cash anyway.

But in the modern era on Everest (whether one likes the fact or not) one doesn’t have to be a fully rounded climber to get to the high camps. Rope fixing experience, rescue skills, compass navigation, route planning etc. are not a requirement on commercial teams. Of course, the more skills you bring to a team, the better use you’ll be to yourself or someone else in an emergency.

Circumstances could separate you from the rest of your team, or a guide becomes ill, so you should be self-sufficient.

However, the more comfortable you are on mountains, the more efficient will be your actions over the 50 or so days of an Everest expedition, and the greater chance you’ll reach the summit.

But to answer your question, what are the minimum requirements for a shot at Everest? 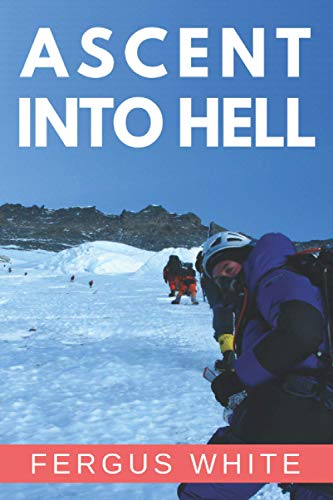 [/one_half_first][one_half_last]Success and failure vie for supremacy throughout in White’s book, Ascent in Hell.

A must for climbing enthusiasts, lovers of adventure, and adrenaline junkies; the closing chapters will leave you breathless.