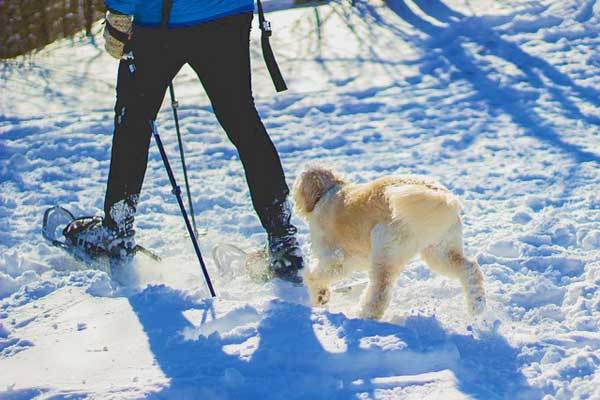 Snowshoes are designed to avoid sinking into snow while hiking. Unlike skis and crampons, snowshoes require no special skills, so they’re perfect for all winter hiking enthusiasts.

But with so many options, how do you choose the best snowshoes for you?

To help you, we’ve created the ultimate buyer’s guide to snowshoes, complete with all of the need-to-know information and reviews of the top models.

Also you can check our expert reviews of the Top 5 Climbing Shoes, Best Approach Shoes and Best Hiking Boots. 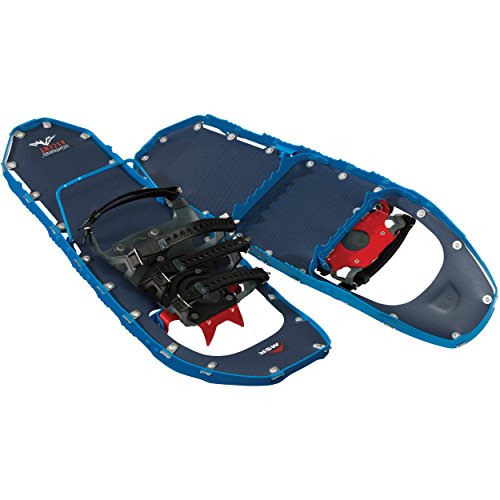 MSR Lightning Ascent combines a rugged design with impressive functionality and durability. You might pay a bit more for these snowshoes than you would for other pairs, but in the end, it’s worth it!

Take a look at the comparison table below before moving on, it might help you make a quick decision based on the most important specs.

If you like to travel light and fast through the mountains, then the MSR Lightning Ascent might be for you.

Built specifically for high octane winter activities, the Lightning Ascent are built with MSR’s proprietary 360° Traction frames that provide the utmost in security and stability, especially when on steep traverses.

The Lightning Ascent also come with MSR’s Dual-component PosiLock AT (video) bindings, which create a secure attachment point between you and your snowshoes while the durable decking can handle anyhting you throw at it.

Plus, if you venture frequently into really deep snow, you can snap on the Lightning Ascent’s Modular Flotation tails for an extra 13cm (5in) of float.

Known for creating some of the world’s best snowshoes, MSR didn’t disappoint with the Lightning Ascent. This pair of snowshoes takes home our coveted award as the Best Overall because it combines a rugged design with impressive functionality and durability. You might pay a bit more for these snowshoes than you would for other pairs, but in the end, it’s worth it! 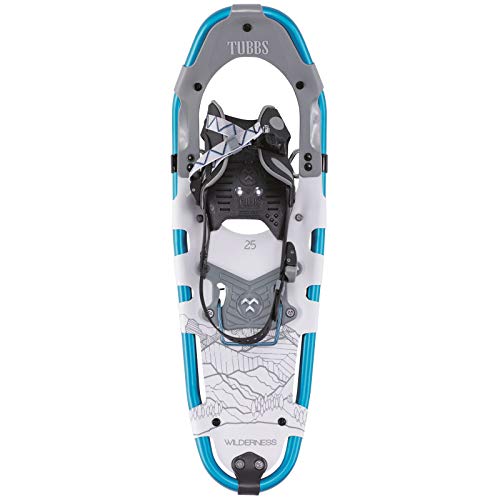 Combining the newest technology with maximum comfort, the Tubbs Wilderness is a tubular aluminum frame snowshoe designed for efficiency and ease of use.

Made with Tubbs’ proprietary 180 Pro binding, the Wilderness quickly adjusts to fits snugly around the foot to add warmth and support without creating annoying pressure-points.

Plus, the Wilderness features a rotation limiter, which allows your foot to rotate within the snowshoe, which allows snow to sluff off the back of the decking while simultaneously preventing over-rotation and shin bang.

If that wasn’t good enough, the Wilderness’ crampon is made from carbon steel to provide superior traction in variable snow conditions, with adding weight.

The Tubbs Wilderness is an ideal beginner-friendly snowshoe thanks to its easy on-off design. It was built for comfort, which is perfect for a newer snowshoer that’s just starting to get their feet under them on the snow. 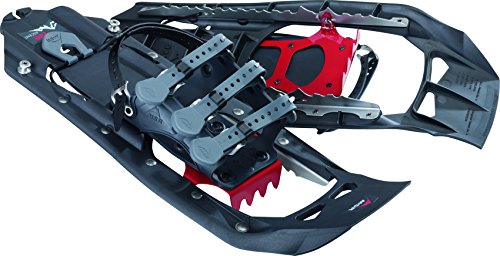 The MSR Evo Ascent are the more robust older sibling of the MSR Evo Trail, which mean’s they’re designed for the ruggedness of off-trail travel, regardless of the snow conditions.

Built to last with a plastic UniBody decking and built-in steel traction rails,  the MSR Evo Ascent are great, even when the terrain gets icy.

The main difference between the Evo Trail and the Evo Ascent is that the Ascent offers a more durable 3-strap binding, heel lifters, more aggressive crampons, and a stronger injection-molded decking for long-term use int the harshest of conditions.

Thus, if you spend a lot of time off-trail in remote areas of the backcountry, these might be the snowshoes for you.

If maxmimum versatility is your goal, then the MSR Evo Ascent might just be what you want. These snowshoes combine the best of lightweight materials with a sturdy, durable design. They can’t support a lot of weight on their own, but with the optional tails, they can get the job done with heavy loads. 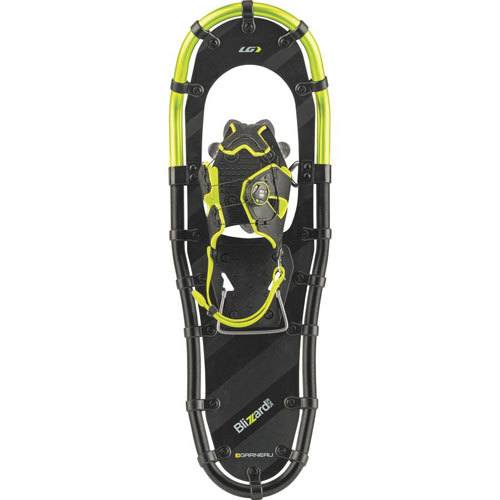 The Louis Garneau Blizzard II is a heavy-duty snowshoe that can handle heavy loads.

The snowshoes’ Lightect decking is both durable and flexible down to the frigid temperature of -40°F/C, so you can be confident in your gear.

Moreover, the Blizzard II features a Single Boa Closure system for on-the-fly adjustments, which means you won’t have to waist precious moments fiddling with your bindings during your hike.

The crampons are made from a lightweight, yet durable high-carbon steel, so they perform well on a variety of terrain and snow conditions.

The Louis Garneau Blizzard II is a heavy-duty snowshoe for heavy-duty loads. They’re built to last with quality materials, but this does make them some of the heftiest snowshoes in our review. Thus, they’re best used when maximum load capacity is the priority, such as on long winter backpacking trips. 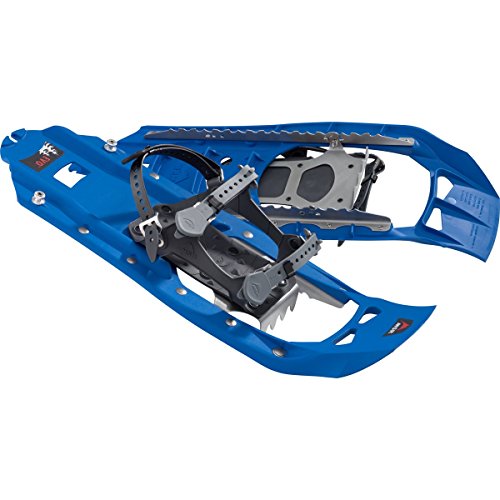 Simple, light, yet incredibly versatile, the MSR Evo Trail is the snowshoe for no-nonsense hikers who just want to get out into the mountains.

Perfect for the weekend warrior and every-day adventurer, alike, the Evo Trail is built from a plastic UniBody decking with steel traction rails and break bars molded in for the utmost in traction.

Plus, if you head out into deep snow, you can clip on MSR’s Modular floatation tails for on-demand float in the powdery stuff. What could be better?

The MSR Evo Trail is a great snowshoe for on-trail use. It’s best used as a snowshoe for day hikes or short backpacking trips as it doesn’t have the load capacity to support heavy backpacks.

Wading through all of the information that manufacturers provide to consumers can be tricky to do, so we’ve compiled a list of the most important features you should know about before you pick our your next pair of snowshoes.

Here are the top things you should keep in mind when shopping for snowshoes:

While many people think that snowshoes are one-size fits all for any person and any situation, there are actually many different types of snowshoes available, depending on your needs. Generally speaking, snowshoes are differentiated by use, so before you buy a pair of snowshoes, you first need to know what you plan to use them for.

There are three main types of snowshoes: recreational, backcountry, and racing. Recreational snowshoes are best used on flat or rolling terrain and they are great for beginner to intermediate snowshoers who are starting to build up their confidence and experience.

These snowshoes usually feature a wide and long frame with semi-aggressive crampons for deep snow. However, you can often find smaller and narrower recreational snowshoes that are best used on maintained and packed-down trails.

Anyone looking for recreational snowshoes should focus on comfort and ease of use as they usually won’t be venturing out on excessively challenging terrain.

Backcountry snowshoes, on the other hand, should be ready to take on mountainous terrain that is unmaintained.

Racing snowshoes are designed for people who like to trail run in the winter but live somewhere with deep snow. These snowshoes tend to be lightweight, short, and narrow because most snowshoe running takes place on packed-down trails. However, racing snowshoes usually feature semi-aggressive crampons for better traction as you run.

Snowshoes feature a number of different components, each of which is important for the gear’s overall functionality. At first glance, it may be difficult to discern the different parts of a snowshoe and their importance, so we’ve broken it all down here for you:

Back in the day, snowshoes were made of heavy wood and formed into a large teardrop shape. While they did provide a lot of floatation, such frames were heavy and unwieldy when trying to move quickly over difficult terrain.

Modern snowshoes feature frames made from aluminum, steel, or carbon fiber. While some snowshoes have a tubular metal frame, many newer models are made wholly of composite plastic, which offers better traction in icy terrain.

The decking of a snowshoe is the part that provides floatation. For snowshoes with tubular frames, the decking is often made from some sort of synthetic leather or synthetic rubber that’s stretched over the top of the metal to provide more surface area, which prevents you from sinking.

When it comes to snowshoes made from plastic, the plastic actually serves as both the frame and the decking. If you compare plastic decking to the more traditional options, plastic is usually more durable and versatile due to its rigidity.

If you spend most of your time on flat or rolling groomed trails, you may not be terribly concerned with crampons and traction in your snowshoes. However, if you like to venture off trail or into the mountains, then you’ll certainly want a pair of snowshoes with crampons that can provide traction on steep terrain.

Usually, the crampons of a snowshoe are integrated into the underside of a binding. On snowshoes with hinged bindings, the binding swivels to allow your foot to move independently of the snowshoes’ decking, for a more natural stride. On other snowshoes, with fixed bindings, allow for minimal movement of the foot in relation to the snowshoe as you walk.

Some crampons are more aggressive than others, so if traction is important to you, this is a key thing to look for when buying snowshoes.

Different snowshoe manufacturers use a variety of different systems for attaching the snowshoe to your foot. The part of the snowshoe that attaches to your foot is known as the binding. As you can imagine, having a high-quality binding is important so that your snowshoe doesn’t fall off as you walk.

Although everyone agrees that bindings are important on snowshoes, there is no consensus about which binding system is best.

Some people strongly prefer the durability rubber straps of the MSR snowshoe line while others enjoy the ease-of-use of some other systems that require you to simply pull on a single nylon strap to tighten the binding around your foot.

Ultimately, this seems to be a matter of personal preference, but it’s important to find a binding that you enjoy using.

While you’ll see many “snowshoe sizing guides” out on the internet, the fact of the matter is that snowshoe sizing is not the type of thing one can make blanket statements about.

This is because of the sizing of a snowshoe relies on a large number of different factors, including the size and weight of the snowshoer, the terrain involved, the snow conditions, and the amount of weight you’ll be carrying.

Thus, instead of giving you a one-size-fits-all answer, we’ll give you the information you need to determine your own snowshoe size.

The first thing you should think about when sizing snowshoes is the terrain you’ll be on. If you’re planning on hiking in the backcountry or on steep slopes, you’ll want more compact snowshoes with hinged bindings and good crampons. Head off trail, on the other hand, and you might want a bit more floatation to deal with deep snowpacks.

When it comes to the size and weight of a person, you’ll want to look at the snowshoes’ “weight load” rating. This rating should include your weight and the weight of the gear you’ll carry.

Since heavier loads are best served by larger snowshoes, you'll want to check out the range of weight loads that a specific model can handle before you drop some serious dough on a new pair of snowshoes.

You’ll often see snowshoes labeled as “men’s,” “women’s,” or “unisex” but does this matter? What does this label even mean?

It turns out that (surprise!) the difference between a “men’s” and “women’s” snowshoe is usually size and color. Women’s snowshoes tend to come in smaller sizes, both in terms of the decking and the size of a shoe that the binding can accommodate.

However, unless you’re a particularly petite person, you’ll probably be able to comfortably wear men’s or unisex models. 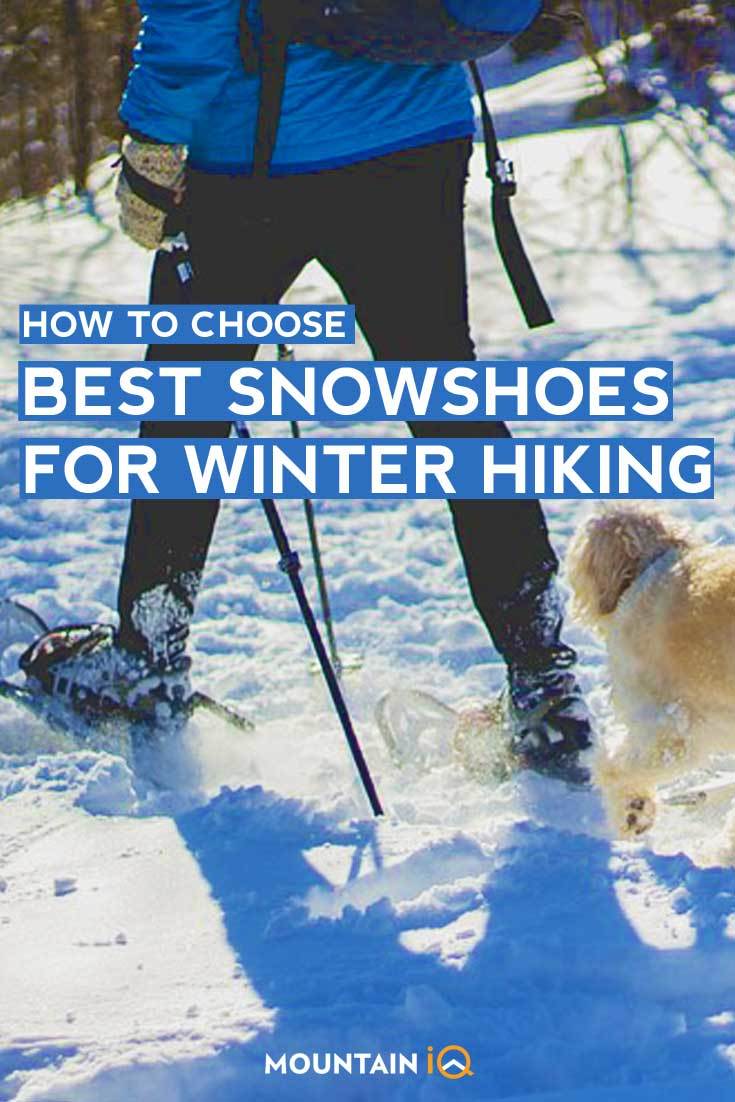