Cascade Range – The Pacific Ring Of Fire Volcanoes (With Videos) 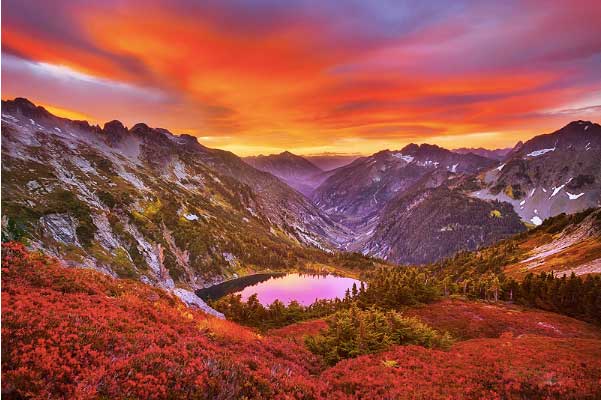 The Cascade Range is a great mountain range in North America that spans all the way from southern British Columbia through to Northern California.

The mountains are home to both non-volcanic mountains and volcanoes as it lies within the Pacific Ring of Fire. The Cascade volcanoes are responsible for all of the volcanic eruptions in the conterminous United States in the past 200 years.

Check out this guide for a comprehensive overview on the Cascade Mountain Range, including information on its most notable mountains and best hikes.  For our list of the best hiking parks in America see this article.

The Cascade Range was formed through a process of subduction when the Juan de Fuca Plate (oceanic crust)  dove under the North American Plate (continental crust). This collision of tectonic plates caused uplift of the Earth's crust and resulted in the formation of the mountains.

These mountains are a mixture of ocean sediment, basaltic ocean floor, continental crust and mantle from deep below the Earth's surface.

The friction and immense pressure between the plates causes the mantle above the oceanic plate to melt, thereby creating magma. This magma rises and erupts from the Earth's surface and creates the band of volcanoes that make up the High Cascades. This section of the Cascade Range lies over the subduction zone and forms part of the Pacific Ring of Fire.

The Cascade Range lies in the United States with sections extending into Canada. The mountains are 1,100 km long and begin at British Columbia in Canada, stretch through Washington and Oregon, and reach an end in Northern California.

The small section of the range that lies within Canada is known as the Canadian Cascades.

The Cascades contain many volcanoes, the tallest ones are known as the High Cascades with most of them towering over the surrounding mountains.

The northern reaches of the range are more rugged and support glaciers. While the mountains don't reach extreme heights in this section of the Cascade Range, the valleys are quite low and deep, resulting in excellent relief.

There is only one major break in the Cascade Mountains outside of Canada: the Columbia River Gorge. The Columbia River cut through the mountains over millions of years, thereby creating the gorge and exposing the distorted layers of basalt that were uplifted from the Earth's crust.

The climate in the Cascade Range varies depending on elevation and location. The western slopes of the mountains are influenced and moderated by the Pacific Ocean.

Winters along this side are rainy with milder temperatures, while summers are warm and dry. December and January are the wettest months in this region.

The eastern side of the Cascade Range has more of a continental climate with cold, snowy winters and hot, dry summers. Some of the highest mountains in the range have caps of snow throughout the year.

This climate extends to the Canadian portions of the Cascade Mountains where it is very cold and snowy.

The Cascade Range has multiple different zones of vegetation at different levels of elevation on the mountains. Large forested areas dominate the slopes of the Cascade Mountains with many different coniferous tree species, including red cedars, Western hemlocks, firs, spruces and pines.

Above the forest lies a meadow zone that consists mostly of grasses and low-lying shrubs. The alpine tundra zone occupies the higher elevations of the mountains where there are no trees, and then there is a glacier zone at the highest elevations where ice covers the mountain peaks.

The North Cascades are a hotspot for plant diversity with over 1630 different vascular species.

The Cascade Range is also rich in wildlife with over 75 species of mammals and 200 different species of birds. The mountains are home to grizzly bears, wolves, black bears, mountain lions, cougars, coyotes and bobcats. You can also find elk , beavers, deer, mountain goats and moose dwelling along the slopes.

The North Cascades encompass the northern sections of the Cascade Range that span from British Columbia in Canada to Washington in the United States.

This region of the Cascade Range is mostly made up of non-volcanic mountains, although it does contain a few stratovolcanoes, including Glacier Peak, Mount Baker and Coquihalla Mountain. 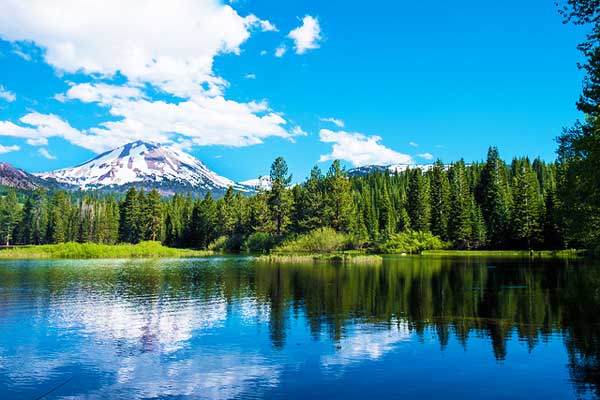 The High Cascades make up the rest of the Cascade Range all the way from Mount Rainer, in Washington, through the state of Oregon, until Lassen Peak in Northern California.

The mountains in this region are of volcanic origin, having built up from lava and volcanic debris over many years.

A chain of lava domes, long-lasting volcanoes and cinder cones make up the High Cascades. Sitting on the Pacific Ring of Fire, this region of the Cascade Range has been volcanically active for several million years.

The Cascade Range is filled with impressive volcanoes and snow-capped mountains, several of which reach heights over 3,000 meters. Most of the tallest mountains in this range are stratovolcanoes that are still active.

Here is some more information on some of the most notable mountains in the Cascade Range.

Mount Rainier is the highest mountain in the Cascade Range with an elevation of 4,392 meters above sea level. The big, active stratovolcano is located in the Mount Rainier National Park in Washington. It is considered to be ones of the world's most dangerous volcanoes and is on the Decade Volcano list.

Because of its enormous size and large quantity of glacial ice, it is possible for Mount Rainier to create massive mudflows that could cause some serious damage to the Puyallup River valley.

Mount Baker is a large, active stratovolcano located in the North Cascades in Washington with an elevation of 3,286 meters. It has a glaciated cone and was the most recent volcano to form in the Mount Baker volcanic field, with its current cone being no older than 140,000 years.

Mount Baker is the second most heavily glaciated mountain in the Cascade Range, Mount Rainier being the first. It has more ice and snow on its slopes than all of the other Cascade volcanoes have put together (excluding Mount Rainier).

Mount St. Helens is another active stratovolcano in Washington and has an elevation of 2,549 meters. It has the most thermal activity out of all the volcanoes in the Cascade Range and is famous for its pyroclastic flows and ash explosions.

Mount Hood is a stratovolcano that is considered to be potentially active. Its height has varied over the years due to the amount of snow on its peak. The most recent estimation puts the mountain at a height of 3,429 meters.

It is the highest peak in Oregon and although it is thought to be the volcano most likely to erupt in the state, the chances are very slim so it is generally considered  to be dormant. Mount Hood supports a dozen named snow fields and glaciers, the majority of which are over the 1,800 meter level.

For one of the best views of Mount Hood head on one of the hikes near Portland.

Mount Adams sits at an elevation of 3,743 meters and is a potentially active stratovolcano that last erupted over 1,000 years ago. It was named after President John Adams, who was one of the Founding Fathers of the United States.

Mount Adams is situated only 80 km away from Mount Rainier and has a similar flat-topped shape so many people flying over the area confuse it for its bigger neighbor.

Notable Hikes in the Cascades

The Cascade Range is home to many hiking trails and national parks to explore along its vast lengths. From forested walks around the lower slopes to steep trails leading to glaciers in the higher reaches of the mountains, there is a trail for everyone to enjoy.

For more hikes in San Diego see this article and for California hikes see this one.

Here are some notable hikes in the Cascade Range.

The hike to Palmer Glacier is a popular trail in the Timberline Lodge ski area in Oregon.

The trail is a moderate, 4 mile long round trip that will get your heart pumping and offer splendid views of Mount Jefferson.

Although its name might suggest otherwise, the hike to Easy Pass is quite a strenuous journey.

It is a 7.4 mile round trip hike that leads you up a short, but steep trail across rocky meadows and talus slopes until you get to Easy Pass.

The hike to the pass offers hikers the chance to see stunning views over Fisher Basin and to the Black and Fisher Peaks towering over the land.

The Copper Ridge Loop is a great trail for hikers looking for more of a long distance trek. The loop is a 34 mile long round trip journey that takes you up beautiful glacier-carved valleys and meadows full of wildflowers.

The trail begins at Hannegan Pass, where you can choose to climb Hannegan Peak for some spectacular views of the North Cascades National Park.

The trail from the pass leads down into the forest until you reach the Boundary Camp.

From here the trail becomes steeper and takes you to the Egg Lake junction where you climb the ridge and enjoy the stunning lake view before heading on to the Copper Mountain Lookout.

The hike to Cascade Pass is a great 12 mile long day hike that is only open in the summer months.

This is one of the most popular trails in the North Cascade National Park.

It's quite a steep hike with an elevation gain of 4,000 feet. The Cascade Pass trail is also great for wildlife viewing.

If you plan to hike in the Cascade Mountain Range, make sure that you are adequately insured for up to 4,000m. We recommend World Nomads. Use the calculator below to get a quick quote. 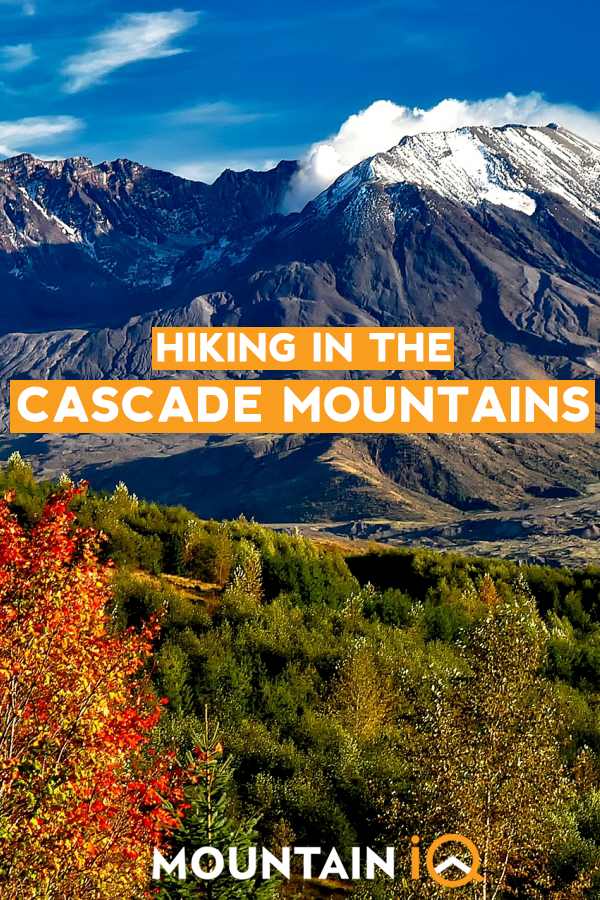 You May Also Find These Articles Useful