The Sierra Nevada is part of the American Cordillera and is located in California and Nevada in the United States of America.

The range is well known for several of its features, including Lake Tahoe, Yosemite Valley and Mount Whitney - the highest mountain in the contiguous United States.

Check out this guide for a complete overview of the Sierra Nevada Mountain Range, with information on its geography, wildlife, notable mountains and hiking spots. This article contains affiliate links. It won't cost you extra, but if you buy something using our links, it will help us keep the site alive!

Millions of years of erosion wore the mountain down until it was only a few thousand feet high. Then, about 10 to 20 million years ago, a block of the Earth's crust was uplifted and tilted in a westward direction - giving the Sierra Nevada its distinctive asymmetrical look we see today.

Rivers and glaciers also eroded sections of the mountain range. As a result, the mountains feature deep valleys and u-shaped canyons.

The Sierra Nevada Mountain Range is still being affected by uplift today, which causes big earthquakes in the surrounding area.

The Sierra Nevada Mountains are situated in Central and Eastern California, with the Carson Range spur stretching into Nevada.

The range stretches from the Susan River, Fredonyer Pass and North Fork Feather River all the way to the Tehachapi Pass near the Mojave Desert at its southern boundary.

On the western side of the Sierra Nevada lies the Central Valley of California and on the east it is bordered by the Basin and Range Province.

There are  many cities and communities located in various sections of the Sierra Nevada, including South Lake Tahoe, Carson City, Grass Valley and Paradise. Human activity, such as mining, logging and tourism, have had a massive impact  on the shape of the mountains over many years - more so than the effects of water and ice erosion over many millennia.

The Sierra Nevada's climate is influenced by California's Mediterranean Climate, which is characterized by dry summers and rainy winters. Rainfall occurs during the autumn, winter and spring months ranging from about 510 to 2,030mm. At elevations above 1,800 meters, most of the rain comes down as snow.

The central and northern sections of the western side of the Sierra Nevada receive the  most rainfall because of orographic lift (when air is forced from a lower elevation to a higher one).

Due to the proximity to the Pacific Ocean, winter temperatures are generally quite low but moderate. Although, temperatures can drop below 0˚F (-18˚C) in the valleys and it gets much colder higher up in the mountains.

The summer months, from June to September, are the hottest and driest months with little precipitation. However, afternoon thunderstorms can occur, especially when the North America Monsoon hits in late summer. Summer temperatures are quite variable, ranging from 42-90˚F (6-32˚C).

The Sierra Nevada Mountains can be separated into several different biotic zones. These zones support different species that can thrive in the type of climate occurring in each zone.

Here are the different biotic zones of the Sierra Nevada:

While the wildlife populations in the Sierra Nevada Mountains have declined over the years, partly due to human presence, the range still supports a diverse array of animals, birds and fish. Mule deer, mountain sheep, badger, striped-skunk, flying squirrel and golden beaver can all be found in various sections of the mountains. Predators in the Sierra Nevada include black and grizzly bear, bobcat and mountain lion.

Bird life is rich in the mountain range so avid birders should keep an eye out for Brewer blackbirds, spotted owls, goshawks and white-toed woodpeckers.

Mountain Regions In The Sierra Nevada 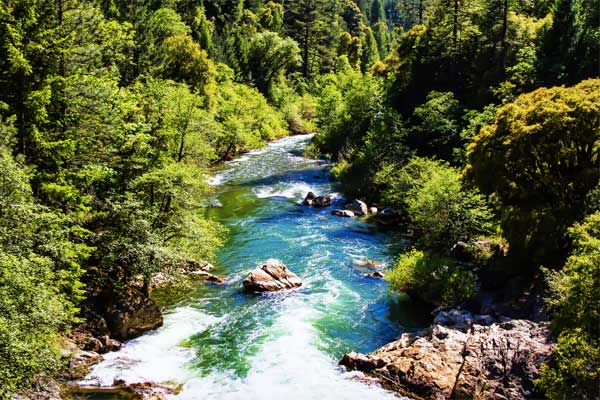 The Northern Sierra Nevada is situated close to the southern reaches of the Cascade Mountains and stretches down to cover the Tahoe National Forest, as well as the Feather River and the Bear River. 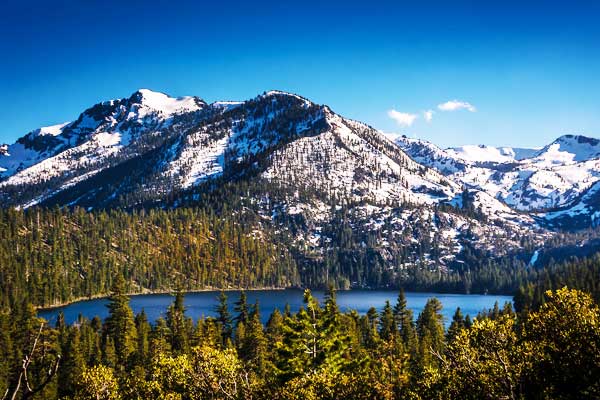 The Tahoe Emigrant corridor, or the Lake Tahoe-Sonora Pass, lies below the northern region of the Sierra Nevada covering the area from the Tahoe National Forest to the Stanislaus National Forest, Cherry Lake and Lake Eleanor. 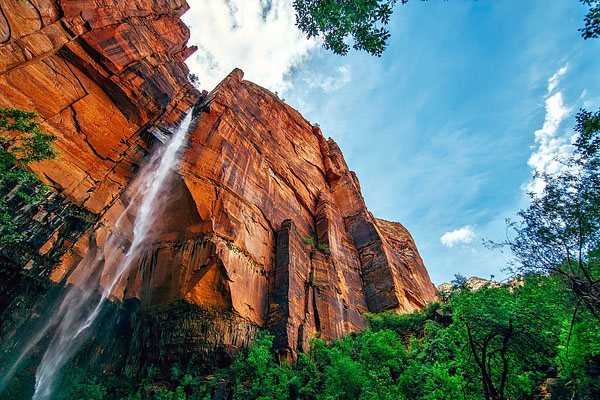 The Yosemite Gateway lies below the Tahoe Emigrant Corridor and covers the Yosemite National Park. This region is generally considered to be another section of the Central Sierra Nevada Region. Yosemite is a popular place for hiking and trekking as it has many unique landmarks to see. 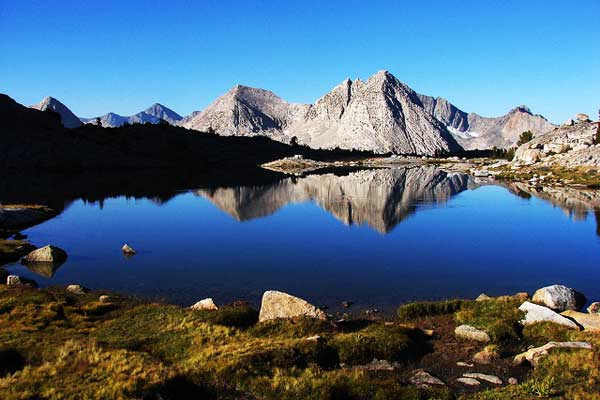 The Central Sierra Nevada spans from the Sierra National Forest to the Kings Canyon National Park. The highest peak in this region is the North Palisade at 4,343m above sea level. 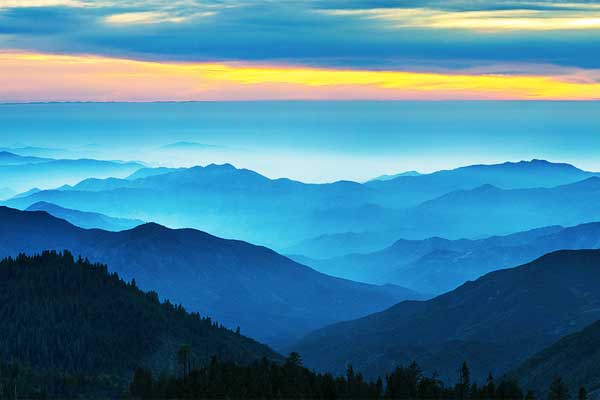 The Southern Sierra Nevada covers the mountains from the Sequoia National Park down to the southern boundary at the Tehachapi Pass. The highest peak of the Sierra Nevada, Mount Whitney, is located in this region at an elevation of 4,421m.

The Sierra Nevada mountains are an enormous range made up of many different mountains. There are many peaks to explore, 11 of which reach heights over 14,000 feet (4,267 meters).

Here is a bit more information on some of the most notable mountains in the Sierra Nevada range. 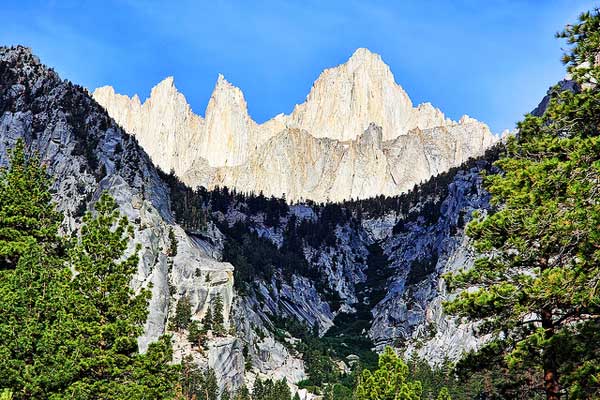 Mount Whitney is the tallest mountain in the contiguous United States at 4,421 meters above sea level. It is located between the Inyo and Tulare counties in Central California.

The mountain was named after Josiah Whitney, a geology professor at Harvard University, in 1864. Mount Whitney was first summited by Charles Begole, A. H. Johnson, and John Lucas in 1873. 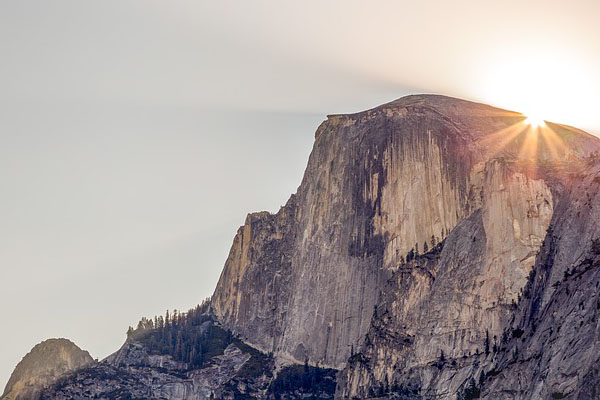 The Half Dome is a large granite dome located in the Yosemite Valley of the Yosemite National Park. This famous rock formation was named for its distinctive shape with one of its sides having a steep, vertical rock face while the other three form a smooth, rounded dome shape.

The summit of Half Dome was first successfully reached in 1875 by George G. Anderson. 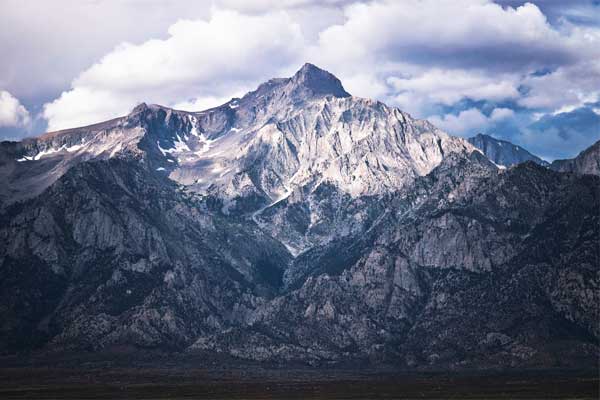 Mount Williamson is the second tallest mountain in the Sierra Nevada with an elevation of 4,383m. The mount is located in the John Muir Wilderness, which lies within the Inyo National Forest. Despite being slightly shorter than Mount Whitney, Mount Williamson makes for a more daunting and less popular climb as it lies closer to the Owens Valley Floor.

The first recorded summit of Mount Williamson was made by W. L. Hunter and C. Mulholland in 1884 along the Southeast Slopes Route. 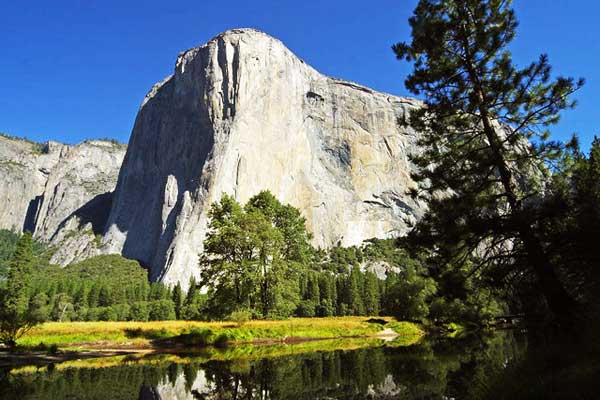 El Capitan, which is Spanish for ''The Captain'', is a distinctive rock formation in the Yosemite National Park. The mountain is a granite monolith that protrudes vertically from the ground and reaches an elevation of 2,308m.

El Capitan poses a great challenge for climbers wanting to reach the top of the sheer rock cliff. The most popular route, The Nose, was first climbed by Warren Harding, Wayne Merry and George Whitmore in 1958.

The Sierra Nevada Range are a large expanse of beautiful, natural land, with mountains, lakes, valleys and unique rock formations. Therefore, there are many different spots to explore and trails to trek in this stunning area.

Here are some notable hikes in the Sierra Nevada Mountains. 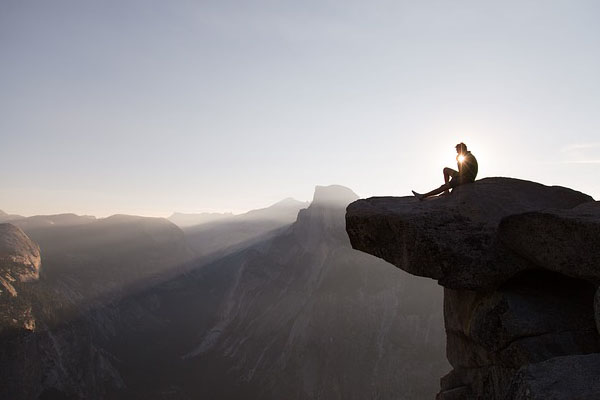 The Half Dome Hike in Yosemite National Park is one of the most well-known and popular hikes in the Sierra Nevada. This distinctive rock formation poses quite a challenge for hikers and rock climbers. The hike is very strenuous and requires a good level of fitness for a successful climb.

The ascent of the Half Dome requires you to climb up the vertical rock face using cables, so it is not for the faint-hearted. The view from the top of the dome is just breathtaking and the feeling of accomplishment once you've reached the top is well worth the challenge. 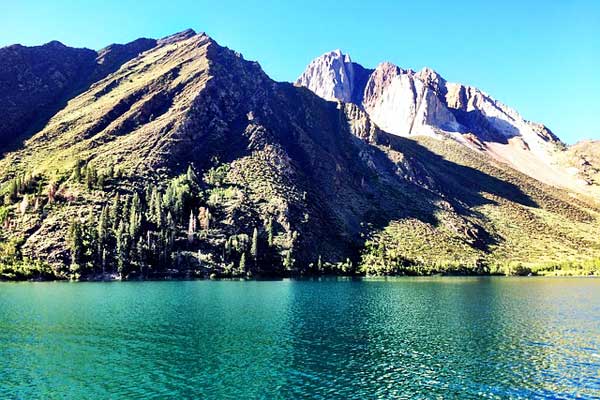 The hike to Convict Lake is a short day hike that leads to a beautiful lake in the Inyo National Forest. This is an easy trail over fairly flat terrain so it's perfect for the whole family.

The trail takes you along a 3-mile loop around the lake where you will get a great view of the surrounding mountains. You will also walk through parts of the forest, which is particularly beautiful in the autumn months. 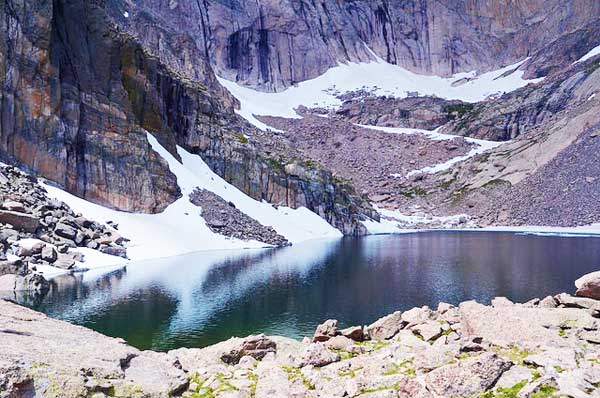 The hike to Yosemite Falls is a difficult day hike that takes about 6 to 8 hours to complete. The trail takes you along the Valley Loop Trail and through thick oak tree forest until you reach a plateau. From here you will find some magnificent views of the Yosemite Valley.

You can then choose to stop at Columbia Rock or continue to the top of Yosemite Falls. The massive waterfall will leave you breathless as it drops down a staggering distance of 2,425ft.

If you plan to hike in the Sierra Nevada Mountains, make sure that you are adequately insured for up to 4,000m. We recommend World Nomads. Use the calculator below to get a quick quote. 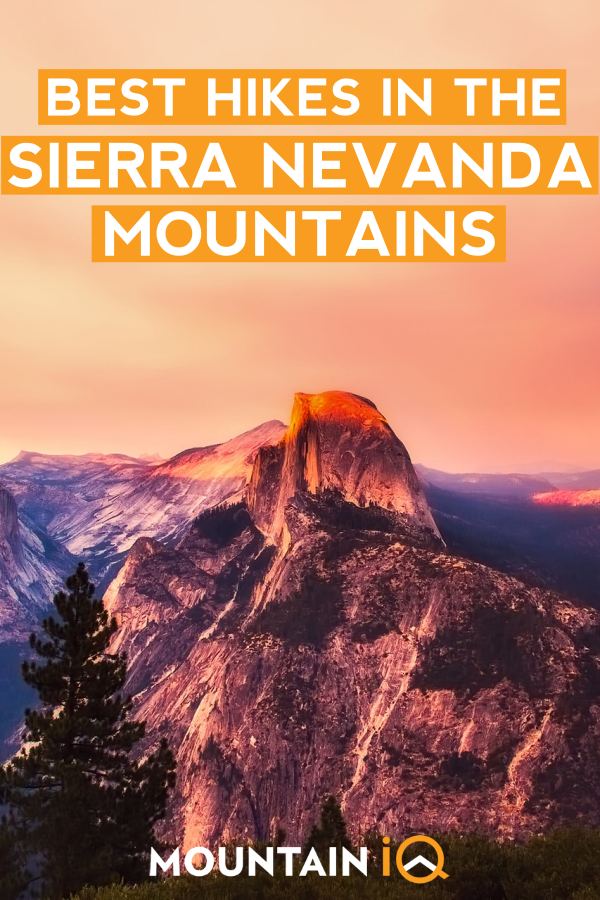