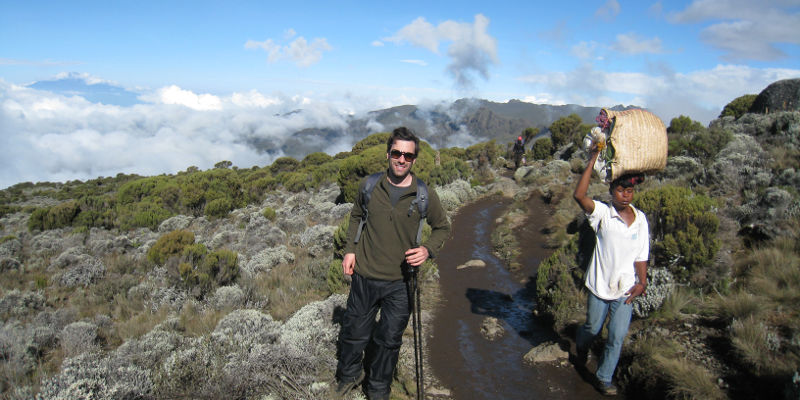 This page provides a comprehensive and impartial guide to climbing Kilimanjaro via the Marangu Route.

Please note: We are not a tour operator, but we can put you in touch with our recommended partner, see details below.

The Marangu Route, which approaches the mountain from the southeast, is the only route up the mountain which offers hut accommodation, as opposed to the tents which are used on other routes.

It is also special as it can be completed in as little as five days, offering the quickest route to Uhuru Peak. An extra acclimatisation day is recommended, however, therefore the route is typically completed in six days.

Due to the availability of hut accommodation and its low cost, the Marangu Route is the most popular route on the mountain for beginners -- as such, its success rate is lower than some of the other routes, as many hikers underestimate the difficulty of reaching the peak of Kilimanjaro. The map illustrates the Marangu Route, which begins on the South-eastern side of Mount Kilimanjaro. The route ascends and descends on the same trail. The Marangu Route has one of the poorer route profiles on Kilimanjaro, as there is very little opportunity to Climb High and Sleep Low.

The route to the summit is also pretty rapid, which means that there is not much time to properly acclimatise. The Marangu route can be completed in 5 or 6 days. Below is a detailed itinerary for the five-day Marangu Route. For details on the six-day variation, see the Route Variations section below.

The Marangu Route begins on the southeast side of the mountain at Marangu Gate (1,870 meters). The first day of trekking begins with a one-hour drive from Moshi, or a two-hour drive from Arusha to the Kilimanjaro National Park gate, where trekkers will be introduced to their crew, which includes guides, porters and cooks. Trekkers must register with the rangers at the park gate. Packs are weighed to ensure they don't exceed 20 kilograms, and the porters arrange all the gear needed for the days ahead. Once you hit the trail, it's a 4-6 hour trek to reach Mandara Hut(s) at an elevation of 2,700 meters. The huts are Kili-style luxury, fully-equipped with solar power and flushing toilets. The huts each hold 6-8 bunk beds.

Day Two starts early, with trekkers hitting the trail before 8:30am. A fairly-long day of hiking will lead you from Mandara Hut (2,700 meters) to Horombo Hut (3,720 meters) through rainforest and low alpine landscapes. Trekkers can expect to see giant lobelias growing at this altitude.

On day three of the five-day Marangu Route, trekkers journey from Horombo Hut (3,720 meters) to Kibo Hut (4,700 meters). There are two paths to Kibo Hut. Most hikers take the lefthand path, as it is an hour shorter than the righthand path. The last water stop on your way up the mountain is located at an altitude of 4,130 meters. Fill up your water bottles here, as you won't have another chance before returning to Horombo Hut after your summit attempt. (Bottled water is available for purchase at Kibo Hut.) Try to get to sleep early at Kibo Hut -- the summit attempt starts just after midnight! Be sure to have your headlamp, insulated water, snacks, etc. in order and ready to go before drifting off to sleep.

Day four begins early -- before midnight, in fact. The porters will offer you some hot tea and biscuits before you begin your summit bid. A rocky path leads to the first checkpoint at Hans Meyer Cave (5,150 meters). After several switchbacks, trekkers then arrive at Gilman's Point (5,681 meters) on Kibo's rim. Take some time here to have a snack and gather your strength for the final push to the summit of Uhuru Peak, only 200m of altitude higher. For many people, this last stretch of trail before the summit is the most difficult of the entire trek -- but is also the most rewarding, as you will discover as you soak in the view from the highest point in Africa.

The descent is long and arduous, so it's best not to spend too long on the summit. After an exhausting day of 12-16 hours of trekking, you will find yourself back at Horombo Hut (3,720 meters), where warm beds and cold beers await!

You will cover a lot of distance on the final day, but it should only take 6 to 8 hours as the trail is generally good. Upon reaching the park gate, trekkers are presented with a certificate acknowledging their accomplishment of reaching either Gilman's Point or Uhuru Peak. It is appropriate to tip your porters and guides at this point. You will then be driven back to either Moshi or Arusha.

The Marangu Route is operated as either a five-day or a six-day trek. In order to allow enough time for acclimatisation, it is recommended that trekkers take the six-day route. The only difference between the two routes is an extra day spent at Horombo Hut to acclimatise; many trekkers spend this day taking photos and exploring the nearby terrain. It is a rare opportunity for some downtime.

A great overview of the Marangu Route, demonstrating the sights and sounds you can expect on this beautiful trail. Mount Kilimanjaro: Trekkers Guide to the Summit is a practical and super insightful guidebook that has been used by 1000s of climbers as an authoritative resource to prepare for Mount Kilimanjaro.

The book is available on Amazon Kindle or an eBook version can be downloaded here.

When is the best time to trek the Marangu Route?

June to September is the best time to climb Kilimanjaro, as the weather is best. That said, since it is close to the equator it is possible to climb the mountain at any time of the year. April and May are the rainy season so most hikers avoid these months.

How much does the Marangu Route cost?

The Marangu Route is widely-considered to be the cheapest route up the mountain since it can be completed in as little as five days.

Here are the major costs to consider when planning to undertake the Marangu Route:

Are permits required for the Marangu Route?

How difficult is the Marangu Route?

The Marangu Route is attempted by many novices each year because it offers hut accommodation and some perceive it as a less-difficult trek than the other routes up the mountain.

This is a misperception --- the five-day route does not allow much time for acclimatisation and can be very difficult, particularly if you attempt it without proper preparation. The summit success rate on the Marangu Route is not as high as some of the other routes up Kilimanjaro. It's a good idea to work on your aerobic fitness before taking on the trek.

Altitude sickness is a serious concern on the Marangu Route, particularly for the five-day variant. Trekkers should be informed of the risks, symptoms and warning signs before they go. We recommend you read our detailed article on Altitude Sickness and Acclimatisation.

If you are particularly concerned about altitude sickness, the six-day Marangu Route is a better option than the five-day trek. One of the longer treks, such as the Lemosho Route or the Northern Circuit Route, would be even better as they allow more time for acclimatisation.

What gear do I need for Marangu Trek?

Trekking Mount Kilimanjaro requires a number of essential pieces of trekking clothing and equipment. You will be exposed to a range of altitudes where temperatures fluctuate dramatically between night and day.

To help you plan and prepare for your trek we have written a detailed gear list.

What type of insurance do I need for Marangu Trek?

Trekking to the summit of Kilimanjaro carries with it certain inherent risks. Chief among these is the risk of altitude sickness. It's a good idea to look into travel insurance before your journey. Make sure your insurance covers trekking up to 6,000 meters, which does not come standard in most travel insurance packages.

Check out World Nomads for a quick calculation of the cost of travel insurance for your trip to Kilimanjaro.