The Caucasus Mountains lie between the Black and Caspian Seas in the Caucasus region of Eurasia. The Mountain system is made up of the Greater and the Lesser Caucasus.

It is the only mountainous area in Europe that has experienced close to no human impact.

Its snow-capped mountains, dominant skylines and mesmerizing landscapes are just a small part of the appeal of this area.

If you are looking to explore the great unknown the Caucasus Mountains are a magnificent option to immerse yourself in isolation and experience a region rarely experienced by people.

The trek from Mestia to Ushguli, in the Svaneti region of Georgia, is one of the most popular multi-day treks in Georgia. It is easily accessible and not too long.

The trek is 54km (34-miles) long and should take 4 days. This route is considered to be of moderate difficulty but should be possible for most people of decent fitness. 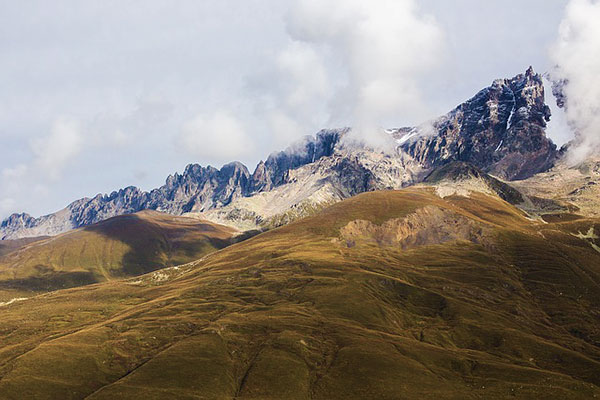 The longest day is about 19km, but the rest of the days are between 10-15km long. There are some step parts, but they won’t be longer than 2 hours.

A great feature of this trek is the availability of guesthouses along the route, meaning you will have access to food, a hot shower and a comfortable place to stay.

If you want to rough it, you have the option to carry your own camping gear and sleep out in the wild, this will add a level of difficulty as you your backpack will be significantly heavier. 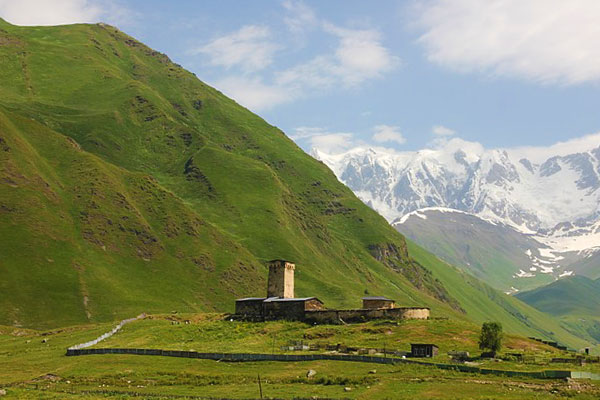 The trek offers great views and passes several traditional Svaneti villages. This trek offers the diverse nature of the Caucasus, including fields, forests, mountains and views of glaciers.

Glacier river crossing is part of the trek.

This trek is not too challenging, and you will experience the true beauty of the Caucasus region.

This trek is one of the best one-day hikes doable from Mestia. It climbs onto a prominent ridge lying northeast of Mestia. The hike can also be incorporated as a part of the Mestia to Ushguli trek if you’re looking for a challenge.

The hike is as difficult as you make it, the higher you wish to go the more challenging the hike will become. There is however no water available along the route, so make sure you bring enough water to last the duration of your hike.

There is only a narrow trail available, and sometimes not even that, but the area is not used for grazing, so you will be sure to see countless wild flowers along the way.

3. Hike To The Mkheri Church

This one-day hike takes you to the Mkheri Church which is Europe’s highest church and is one of the best day walks in the area. The church lies on the Svaneti Range at the foothills of Laila Mountain.

The trek is 17.2km (10.7-miles) and should take between 6-7 hours. The hike is short, but steep and is a roundtrip. From the church you can expect panoramic views of the Caucasus Mountains.

In late July, the people of the village of Latali host as annual festival in which people pray, feast, sing and dance.

The hike isn’t too difficult and can be completed by beginners, just be warned, it can be fairly touristy and may be one you want to miss if you are looking to experience the amazing isolation the Caucasus Regio can offer.

This trek involves climbing to the foot of Mt. Laila, which is the highest mountain in the Svaneti Range. The trek is a roundtrip and is 10.7km (6.6-miles) long. You can expect this trek to take between 2 and 3 days.

Along the route you will cross the Chizghi Pass, which is one of the highest hiking passes in Svaneti, from here you can admire the mountain wall of the Greater Caucasus and even see Mount Elbrus which is the highest mountain in Europe.

The vicinity of Laila Glacier is beautiful. You can expect to see many other smaller glaciers, icefalls and other ice formations.

The trek to Tobavarchkhili Lake is a difficult one. It is almost 80km (50-miles) long and crosses 7 mountain passes and several potentially risky bodies of water. The second half of the trek is quite remote, which means it is hard to get help if a problem should occur.

Despite its difficulty, the trek is awe-inspiring. You will be visiting some of Georgia’s most beautiful lakes during this 50day trek. The trek crosses Egrisi Mountains, which separate Svaneti from Samegrelo lowlands.

The route offers a very diverse environment with high passes, great views, magical lakes, rocky gorges, waterfalls, shepherds huts and remote villages. You may even experience areas that are similar to that of a jungle.

There are no villages or guesthouses along the way, so you will have to pack camping gear. This is one of the most impressive alpine treks. It offers complete isolation from the civilization with no cell phone reception. Immerse yourself in nature and emancipate yourself from the modern world.

One of the biggest appeals of the Caucasus Mountains is its greatest pitfall – unchartered wilderness. Few trails exist and those that do are often cow trails that tend to disappear depending on a season.

Luckily, plans have been put in place to make hiking the region independently safer and more accessible, starting with the development of decent hiking trails. However, you can see if you could book a trek in the Caucasus Mountains with a local tour operator.

The Transcaucasian Trail, which is a route via the Caucasus connecting the Black and Caspian Seas, aims to be the first easy-to-follow trail through the Caucasus Mountains.

The trail, which is not yet completed, will be a world-class long-distance trail more than 3000km (1864-miles) in length.

The trail will connect roughly 24 national parks and protected areas in the region. It seeks to create an accessible route for the exploration of one of the most biologically, culturally and linguistically diverse regions in the world.

Once completed, the trail will take about 3 months to complete and will expose trekkers to the beauty of unspoilt nature, rich culture and heritage of the region as well as the diverse traditions, rituals, unique architecture, cuisine and wine.

The trail will pass through peaks and almost forgotten villages and you are sure to encounter churches well over 1500 years old, which are some of the oldest in the world.

The best time to visit is between June to September for hiking and January to March for ski touring.

Although the trail is not yet completed, there is a 10-day section across Svanti that is currently open. You will pass through diverse landscapes before arriving at the ancient village of Ushguli, which is a UNESCO World Heritage Site.

Mount Elbrus is an inactive volcano in the western Caucasus Mountain Range. At 18510 feet, Mount Elbrus is Europe’s highest mountain, thus making it a part of the Seven Summits.

The climb is considered one of the easiest among the Seven Summits with climbers only needing basic experience.

Although not technically difficult, it is still imperative to make use of the local guides as snow, high winds and high elevation make this climb dangerous.

Climbing season runs from the end of April to mid-September. The optimum climbing period is between July and August when the weather is more stable and predictable.

There are two routes to the summit; the north side which would take between 6 and 7 days and the south side, which takes between and 6 days and is significantly easier than the north side route.

There is a unique cable car system on the south side of the mountain which reaches 12500 feet, from there climbers can take the standard route to the summit.

Another unique feature is the system of huts for resting located on the mountain, including the Barrel Huts at 13600 feet. There is also a snow-cat to take climbers up to 15750 feet.

Mount Elbrus attracts many climbers due to its easy accessibility and gentle slopes. If climbing the one of the Seven Summits is on your bucket list, Mount Elbrus may just be the perfect option.

The Caucasus Mountains are an area not yet discovered by tourism. Explore the ancient villages dotted throughout the isolated mountain range.

Svaneti is a historical region sitting in the southern Greater Caucasus. It is a land of charm and tranquility and is home to Ushguli, one of Europe’s highest inhabited villages.

The medieval villages of Upper Svaneti are interspersed with koshki, which are defensive stone structures built from the 9th century onward.

There are hundreds of these UNESCO-listed watchtowers that have survived centuries of avalanches and floods.

Apart from the obvious mountain scenery, Svaneti also offers ancient traditions, music and cuisine to all who visit.

The region has remained relatively untouched, but it is slowly starting to modernize, the time to visit is now.