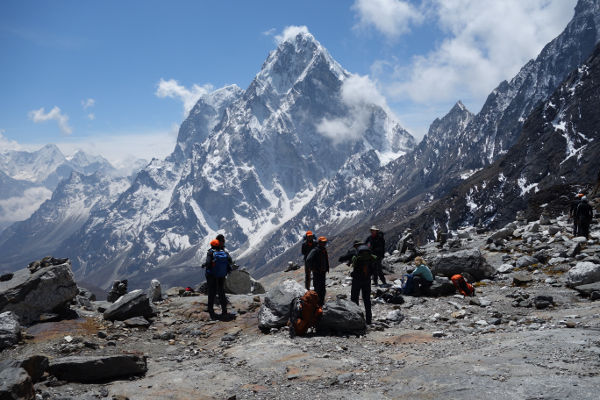 In the wake of the April 2015 tragedy this year, which saw 19 people die from an avalanche at Everest Base Camp, we have decided to write an article on Everest Base Camp trek deaths so that you understand what you are getting yourself into when you decide to trek to Everest Base Camp.

The first thing that should be noted is that the climbers killed at base camp in 2015 were just that – climbers. They were not trekkers.

Anyone on the EBC trek on the 15th April 2016 would not have been affected by the avalanche at base camp. The climbers who were killed were situated further up the valley towards the infamous Khumbu Ice fall.

This is not to say that the EBC trek is totally safe, but it certainly shouldn’t be confused with the much more risky business of climbing Mount Everest.

There are no official statistics for Everest Base Camp trek deaths, however, we would estimate that somewhere in the region of two to four people die every year, although in some years there are undoubtedly no deaths.

With over 30,000 people trekking to Everest Base Camp every year, the death rate is actually very small.

Recent tragedies include Royal Navy scientist, Rachel Burke, who died on her trek to Everest after she started feeling ill from altitude sickness. She had to continue walking a further 10 hours and died the next day in a tea house dining room. Her death was reportedly the result of an underlying heart condition.

Deaths in the Everest Region

We would estimate that some of these deaths, which are attributed to the EBC trek, are in fact from treks throughout the region, like the Gokyo Lakes trek and the Khumbu Valley trek.

There are also a number of trekking peaks in the Everest Region, such as Island Peak and Mera Peak that, although far less dangerous than climbing Everest itself, still pose certain dangers such as altitude sickness.

Glacier crossings, rock falls and moraines add significant danger to longer treks involving ascending high passes such as Cho La pass. Fortunately, these dangers are not encountered on standard treks in the Everest region, and certainly not on a Classic EBC trek.

In our opinion the EBC trek itself is relatively safe in that the trail is straight in and straight out and has in places been widened and smoothed down.

Reducing Risk on an EBC Trek

There are certainly factors that make the EBC trek more dangerous than other treks – the main factor being the altitude. At its highest point – Kala Patthar – you’ll be standing at an altitude of 5,644 metres. If you have taken the necessary acclimatization then you should be fine, however, altitudes of this height can lead to Acute Mountain Sickness and it’s severe variants like High Altitude Cerebral Edema and Pulmonary Edema, as well certainly exacerbate underlying health problems such as heart disease.

Although EBC trek deaths are not common, here are a few points to take note of before you embark on your adventure.

Whilst the Everest Base Camp trek does pose certain dangers, it is statistically very safe and certainly well worth doing! However, we strongly recommend seeking professional medical advice from a doctor prior to your trek. If you’re given the all-clear and take your time on the trek then you should be fine. Deaths are very rare and can usually be avoided with the right preparation.