This review discusses the best belay devices for climbing currently on the market. Rappelling is a popular practice among solo climbers.

Belay and rappel devices are terms that are often used interchangeably, and many (though not all) belay devices double as rappel devices.

Use our guide to compare our favourite Belay devices as well as walk you through buying your first or next device. 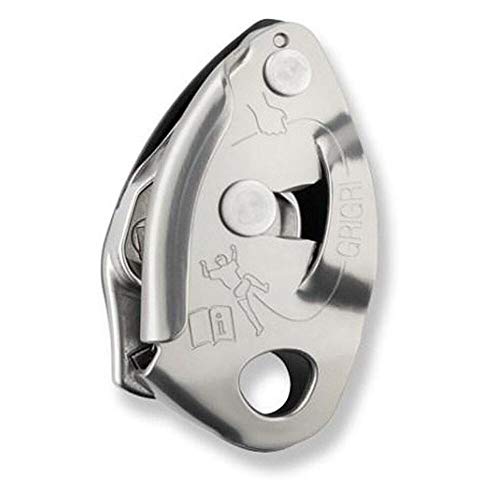 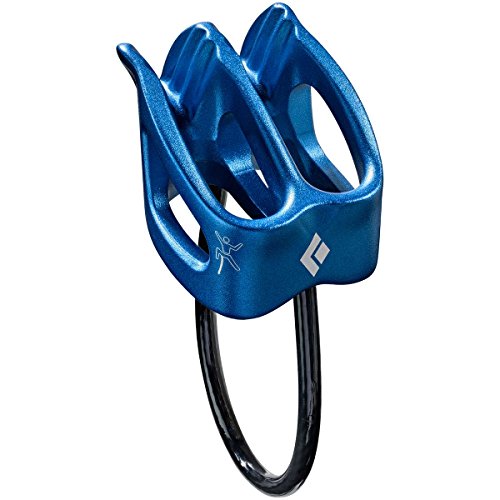 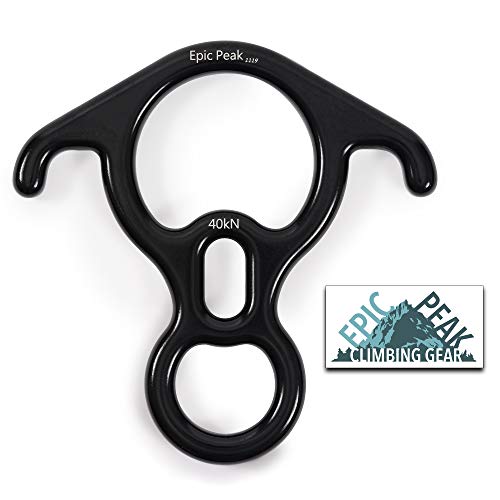 This article contains affiliate links. If you buy something through the links on this page we might get a small commission. It will not affect your price, but helps keep our site alive!

The quality and versatility of the Petzl Grigri 2 have made it one of the best belay devices of the year and a popular choice amongst climbers. Its ability to secure up to 8.9-11mm ropes, for example, is just one rare versatile quality that it has to offer.

Some people struggle with breaking while rappelling – they overshoot targets, strain their hands or arms or underestimate tricky slopes. For such issues, the Grigri 2's high-quality is just what they need. Its well-placed cam pinches and pivots rope to increase braking action, while the dependable braking technology catches falls amazingly.

It is also made of stainless steel, which means its friction plate lasts for ages. Another problem people face with belay/rappel devices is slipping due to smaller sweet spots, or even ripped ropes (from too much friction).

The Petzl Grigri 2’s large sweet spot generates smooth lowering, and the progressive descent control system is one of a kind.

As our top pick, the Petzl Grigri 2 is light enough for easy transport while strong enough to still support heavy weight; its lowering and braking action is remarkable and reliable, and its high-quality promises to last a long time.

The figure-8 design is a common rappelling descender design. It gets the job done on quick rappels and has many uses in the recreational world (and it’s no secret how much climbers like their gear with multiple uses).

The Epic Peak Figure 8 r contains a whopping 40kN strength, meaning it is capable of handling over 4,000kg of weight.

It is specifically designed for climbing and rappelling, but people have also used it to hold up yoga hammocks and aerial silks and are extremely impressed with how well the Epic Peak Rescue Figure 8 holds. Due to its sturdy design, the Epic Peak Figure 8 provides efficient and smooth rappelling as it can dissipate heat from friction more easily.

If you frequently rappel and don’t already own a figure 8, go ahead and grab one of these models because you’re more than likely to use it eventually (and maybe not just for rappelling).

The Epic Peak Rescue Figure 8 Descender is a great choice for those who want a straightforward design for rappelling and descending, and it’s even better for those who practice aerial skills on the side. 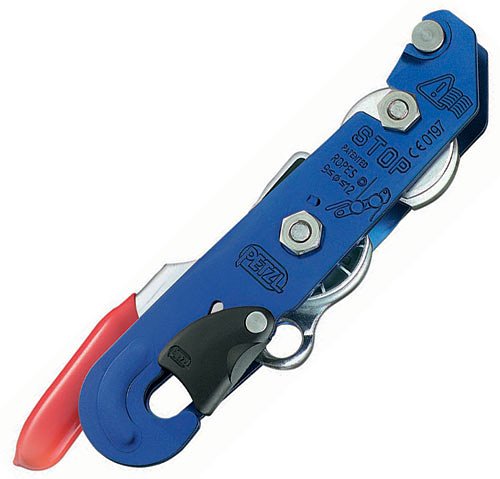 The Petzl Stop Descender was made specifically for caving, with a strong record of reliability. Its design, with its lightweight and affordability, has also made it the most popular rappelling descender for construction jobs.

The Stop works smoothly on both vertical and low angles, which makes it great for caves. It can also help during ascent - but we place major emphasis on the word help.  Something we really like is that is doesn’t have to be removed from its carabiner to attach to a rope, which means there’s no risk of dropping the device.

One of the most-loved features about this rappelling device is the self-braking mechanism, which allows you to stop and maintain your position on your rope.

However, it should be used with caution as some users have experienced it slowly slip. To prevent this, simply tie your rope off so that you can work and manoeuvre in one spot.

The Petzl Stop is easy to use, light, affordable and offers some amazing and reliable features, making it a global favourite. 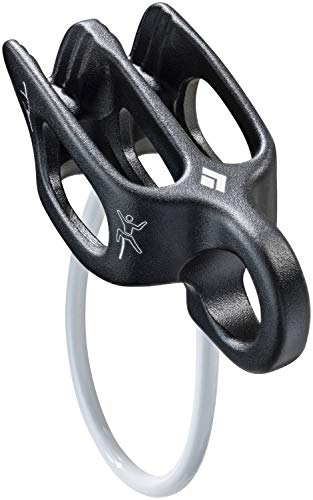 The Black Diamond ATC-Guide is a device we commend for being able to do it all. This well-rounded belay device doubles as a rappel device, and its capacity makes it our best bet for multi-pitch climbing. The ATC-Guide offers smooth handling while you climb with its lightweight and easy-to-use construction.

There are even multiple friction modes – the “slow” side is great for beginners as it generates lots of friction and offers extra caution, while the “fast” side works great for more experienced climbers – and high-friction grooves provide awesome hold and stopping power.

The device’s machined window makes it lighter than the original ATC-Guide belay device and its durable, hot-forged aluminium construction will last you ages. It can also handle a variety of rope sizes. Users find rappelling easy with this device, and with all its perks it doesn’t even break the bank!

This rappel device is roughly $7 less than the ATC-Guide but still shares many of the same features. It lacks a guide mode and, like the ATC-Guide, assisted braking. But in the gym, where everything is controlled and nothing is bigger than a single pitch, it’s all you need. In fact, it’s the device that most gyms commonly rent out.

The TC XP is great to learn on because of this, and climbers say it helps build good habits. It, too, has multiple friction modes and high-friction grooves that provide 3 times better hold and stopping power than normal friction mode, and it can also feed rope between 7.7mm and 11mm in diameter. It should be noted that it is much smoother at rappelling than it is belaying.

Overall, the Black Diamond ATC-XP is almost identical to the ATC-Guide in properties, only it lacks an extra loop for guide mode and is 25% cheaper (give or take).

The Black Diamond ATC XP is an awesome budget buy if the ATC-Guide tickled your fancy but note that it doesn’t provide a guide mode.

As we mentioned above, the most important piece of rappelling equipment is the rappel device. It is a mechanical tool used to control a rope during rappelling and does this through applied friction.

It is ultimately designed to allow climbers to manage themselves with minimal physical effort (and physical preservation is key for squeezing the most out of those long climbing days).

A vast majority of belay devices double as rappel devices – the terms belaying device and rappel device are often used interchangeably - but you need to know how to properly use them in order to rappel safely.

There are three types of belaying/rappelling devices. Ask yourself the following questions, and then use this guide to view the pros and cons of each type of device to get a better idea of which one would work best for you and your needs:

Continue reading this buyers guide with your answers in mind.

The tubular devices are the most common and have also become synonymous with the name ATC (Air Traffic Controller).

A folded rope pushes through the device and clips onto a carabiner, and the dual slots accept two strands of rope for standard rappelling technique.

During rappelling the device is pressed against the carabiner so that friction caused by the bent rope and the device drastically increases to slow down and stop the rope.

Unlike other rappel devices, a tubular device doesn’t really let you go handsfree because it tends to slip if the user is heavy. You must always secure your brake hand on the rope firmly.

The figure 8 style has been around ages now and is primarily used for rappelling. The figure 8 devices have one large and one smaller hole to form a number eight shape.

To rappel with this device, a rope is fed through the large hold and looped around the outside of the small hole until it rests on the neck of the “8“. The small hole then clips onto the belay loop of a harness.

The design dissipates heat easily so that friction is applied smoothly, making for comfortable rappelling. They are often used for rescues and caving but can be used for pretty much any kind of climbing.

This type of device – also known as a self-braking, self-locking, auto-blocking or auto-locking device - is designed to react to a sudden force by locking down on the rope to catch and hold a fall.

These are definitely the safest devices to get and are the best choice for beginners. An example of where it could potentially save a climber is if they were to hit their head and pass out during a climb.

This device would have still caught them and prevented them from falling and further injuring themselves.

Most assisted-braking devices, however, will only work with a single strand of rope, which means you must set up a rope block on one side to rappel. They also tend to get gummed up in canyon sludge and don’t work with too-thick ropes, making them extremely restrictive rappel devices.

Because of this, we think that for experienced climbers we prefer a tubular device or 8-figure to rappel with. 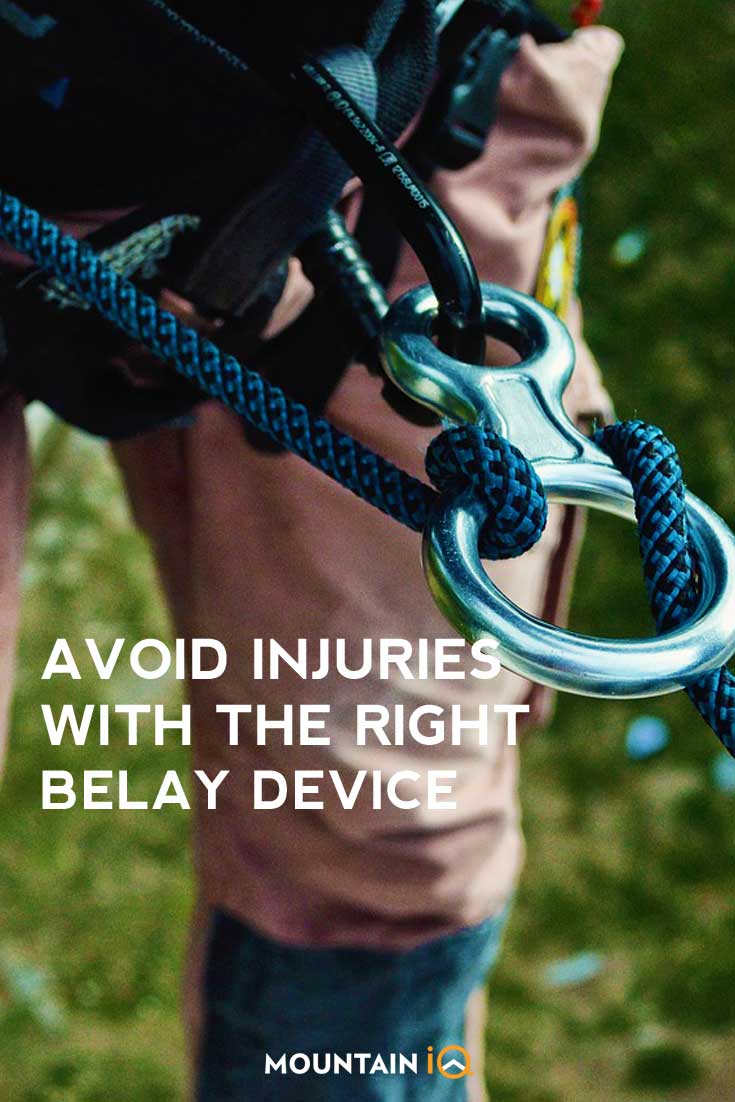