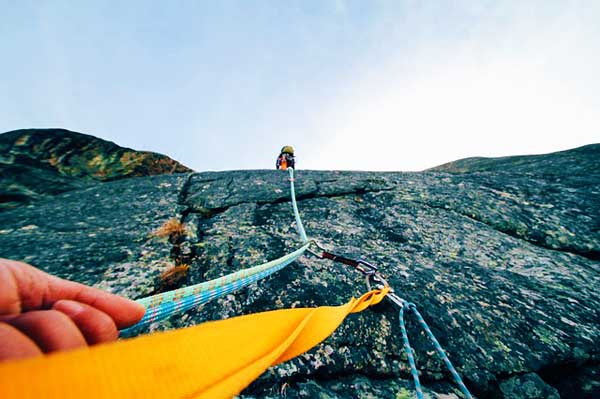 This review discusses the best quickdraws for climbing currently on the market.

A few sets of quickdraws is the next necessary purchase a climber should make after gearing up with shoes, a harness, helmet, locking carabiners and belay device.

A quickdraw is made up of two carabiners that are connected by a length of webbing. This allows climbing rope to run freely through gear while leading.

There’s a fair bit you should consider before purchasing your first, or next, set of quickdraws. Use our top picks and buyer’s guide to help you through it. 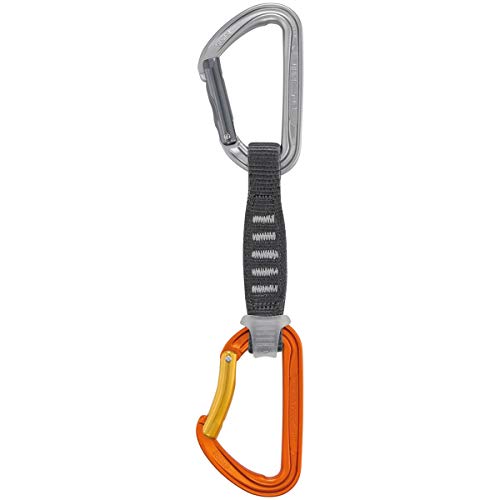 Petzl’s tried-and-true Spirit Express is a favourite amongst climbers, with its smooth and snappy clipping action and its strong and durable design. For a sport climbing quickdraw, this is the best model you can buy.

The Petzl Spirit Express is a well-known and well-loved quickdraw amongst climbers, and experienced readers wouldn’t be surprised to see it at the top of our list.

The Spirit Express is one of Petzl’s strongest quickdraws. The keylock carabiners on this quickdraw are super smooth and makes clipping fast and sturdy, with keylock noses so that the rope never snags on the keylock gate.

The dogbone is stable-feeling – staying rigid when you clip overhands - while its width makes it easy to grab.

All the materials used to make the high-quality Spirit Express are incredibly strong and durable, following the spirit of a climber.

Even the rubber grommet keeping the rope-side of the carabiner from flipping over is rigid.

As light and strong as this quickdraw is, however, we advise not to purchase it for long or alpine climbs.

Petzl’s tried-and-true Spirit Express is a favourite amongst climbers, with its smooth and snappy clipping action and its strong and durable design. For a sport climbing quickdraw, this is the best model you can buy. 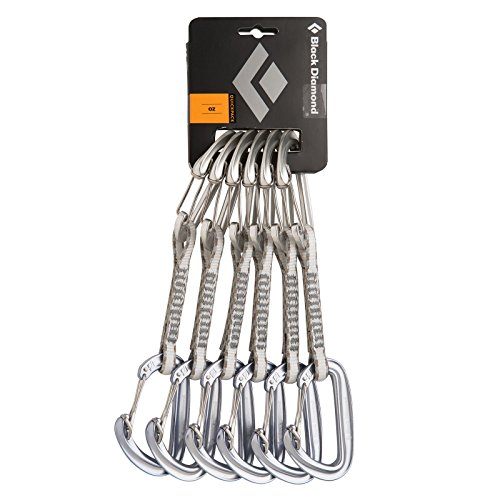 At only 63 grams, this quickdraw is Black Diamond’s lightest quickdraw as well as over 20 grams lighter than any other quickdraw on our list!

The Oz (as in “ounce” due to their 1-ounce carabiners) has a unique design – instead of a rigid dogbone, it has a thin, flexible sling.

This - alongside its light, hot-forged carabiners - are what shaves off those extra grams while staying $4 cheaper than its nearest competition (the Petzl Ange Finesse).

The Oz also features the snag-free HoodWire Technology. This uses a patent-pending, stainless-steel wire hood that brings keylock functionality to carabiners so that they won’t snag on slings or bolt hangers.

Smaller carabiners are great for sports climbing, and with the lightweight of the Concorde this quickdraw also works wonders for trad. Mad Rock is known for offering high-quality and high-performance gear, and the Concorde quickdraws hold true to this tradition.

The Dyneema material used to make the fabric dogbone is sleek and light without compromising strength. The warm-forged aluminium wiregate carabiners are stronger than most, with a higher KN rating (strength measurement) than a lot of larger, heavier ones.

They are also extremely easy and smooth to clip, with a rubber liner on one end of the dog bone that helps maintain proper orientation of the carabiner when clipping.

Their all-round size, weight and price make it easier to purchase and you can carry a lot more Concorde Quickdraws than you could with many other quickdraw models. A lot of users claim that they are as strong and as reliable as anything you’d pay double for.

Overall, the Mad Rock Concorde's portability and lightweight alongside its strength make it perfect for any lead or sport climber. 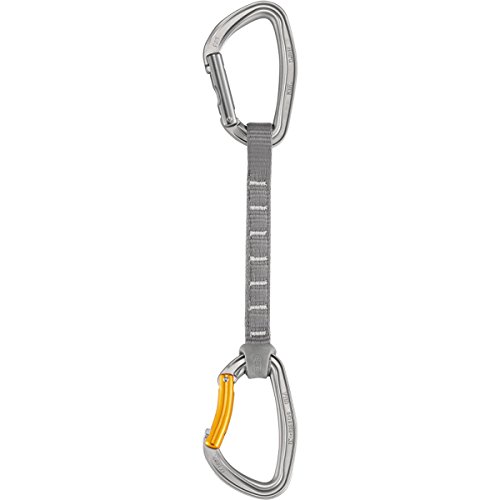 The Petzl Djinn Axess Quickdraws is easy to use and durable enough to allow a clean initiation into outdoor climbing, making it the best quickdraw for climbing newbies.

The Djinn carabiners are larger than average, making them easier to handle and they work well with gloves. Their H-shaped profiles offer fantastic strength while remaining light.

The lower carabiner has a slight curve in the spine that sits nicely in the your hand, as well as a wide rope-bearing surface that is designed to promote rope glide while reducing wear.

The dogbone is thick enough to grab with comfort, and a rubber wedding protector at the bottom of the sling reduces abrasion and keeps the lower carabiner properly positioned.

The weight of the Djinn is a downfall, but for new sport climbers this isn’t a massive concern - its ease of use makes it easy to forgive.

The Petzl Djinn Axess’s large carabiners are easy to use and very forgiving while the overall quickdraw construction is reliable and strong – making it perfect as a first quickdraw purchase. 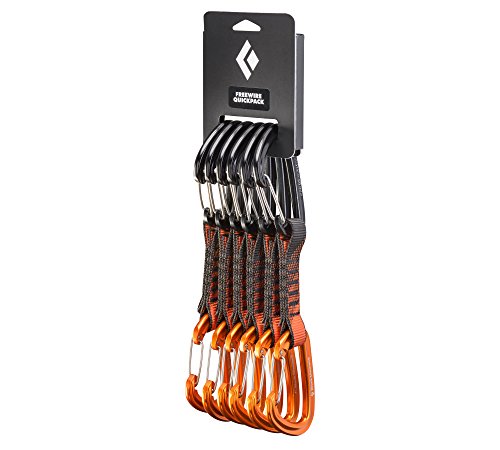 A quickdraw for under $20? It’s hard to believe, but Black Diamond made it possible. What’s more, you can find the FreeWire for even cheaper in their set packs of 6. The cheap price makes it easy to doubt the FreeWire at first, but the 24Kn carabiners used will change that quickly.

They offer full wiregate performance with a no-frills construction, and combined with a polyester dogbone, this quickdraw will catch your fall similar to any of the other models mentioned on this list. The rubber Straitjacket insert in the dog bone also keeps the bottom carabiner in its proper position for easy clipping.

Ultimately, this quickdraw is strong and durable enough to do what it needs to do - no less and no more. Due to their price, you can buy a good amount without breaking the bank to place them tactically for emergencies.

The Black Diamond FreeWire Quickdraw is not the lightest, cleanest, fanciest quickdraw out there, but it costs half the price and gets the job done well. 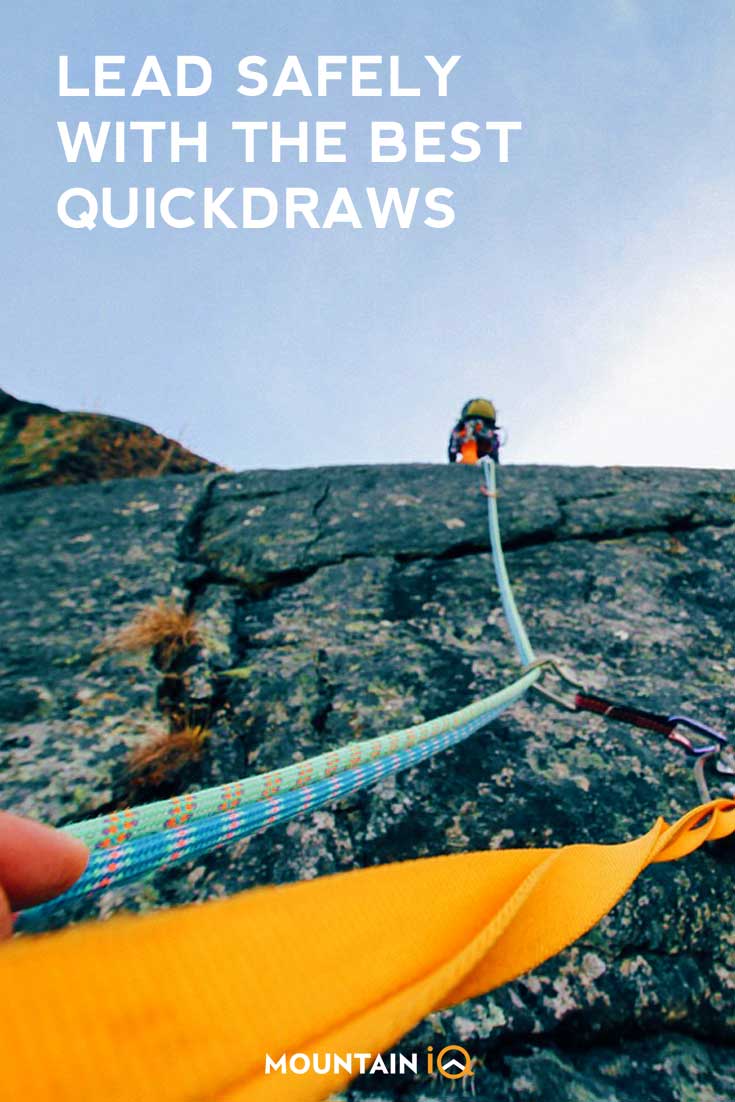 Your quickdraw is just as important as your rope or harness when it comes to protective gear. It needs to be able to catch your fall and be used with enough ease so that you aren’t strained or uncomfortable during your climb (which can be the cause of the initial fall).

As we mentioned earlier, knowing what to look for in a quickdraw may be hard as it will initially seem small and straightforward if you don’t know much about it. But there’s plenty to consider – and you’ll want to be thorough when buying a set of quickdraws, as it can easily set you back by $200.

You get three types of carabiner gates on your quickdraw: straight, bent and wire. Because a quickdraw consists of 2 carabiners, you may also get a combination.

The most common type is the straight-gate carabiner. These, as the name suggests, are perfectly straight from the pivot point to the end. They are easy to use.

Bent-gate carabiners have a concave gate. They are reserved for the rope-end of quickdraws because their shape makes clipping a rope quick and easy.

A carabiner with a straight or bent-gate may be a keylock carabiner, which has a smooth notch where the nose of the carabiner and the gate interact. This prevents the carabiner from hooking and catching onto things, making clipping and unclipping much easier.

If a loop of stainless-steel wire acts as a gate, it is a wiregate carabiner. Wiregates are lighter and also less likely to vibrate open during a fall compared to solid gates. They cannot have the keylock feature that some straight or bent gear carabiners have, but they sometimes have hooded noses that can prevent snagging, similar to a keylock nose.

Short-length slings (a.k.a dogbones) range between 10cm and 12cm. They work in most situations when the route is straight.

Medium-length slings are 17-18cm and great for reducing rope drag. They are ideal for routes that require more than 12 quickdraws, or for routes that aren’t straight. Longer slings tend to be heavier and bulkier.

For sport climbing, it is advised to have a selection of both lengths so that you may be ready for whatever the route has in store. Trad climbers use alpine or extendable quickdraws (the latter refers to a technique in racking the quickdraw so that the sling can be shortened and then extended as needed).

Alongside the gate type, you should consider the carabiner size and shape.

Firstly, note that the smaller a carabiner is the lighter it is, but it is also more difficult to manipulate. If you’re introducing yourself to quickdraws, opt for larger ones to begin with as they are easy to use and more forgiving.

The shape can also affect the carabiners ease of use, especially for large hands. The best way to know if a carabiner will work with your hand size or not is to go into a local shape and get a feel for them manually. You want to be able to unclip and clip your carabiner with a stealthy, light grip, and this requires a nimble fit in your hands.

It’s all good to invest in quality over quantity. But if you’re planning on tackling a long route that requires 24 quickdraws, blowing your whole budget on a handful of carabiners won’t get you there.

Evaluate what routes you’re going to undertake. Most sport routes require 12 quickdraws, making them a good start. Longer routes (30m+) need 16-18 quickdraws. Longer routes will use 24 or more quickdraws. Guidebooks list the number bolts on a route, which will be your quickdraw total.

Consider what you’re getting for your money. Hot-forged carabiners ten to cost more than cold-forged, yet it has been said that cold-forging produces a better product. And although stainless-steel is stronger, aluminium does a great job and is cheaper. Check reviews to see how users have found the products.

Other things to take note of before purchase: