There are three main Bhutan trekking routes. These are the ‘Snowman Trek‘, the ‘Druk Path Trek‘ and the ‘Chomolhari Trek‘. As with most multi-day treks, there are variations available, particularly in regards to the long Snowman Trek.

Although there are some other lesser known treks in Bhutan, the three mentioned above are by far and away the most popular and spectacular.

Below we have provided an overview of each of the three routes and what to expect. This article contains affiliate links. It won't cost you extra, but if you buy something using our links, it will help us keep the site alive! The map clearly demonstrates the major regions throughout Bhutan and a number of the more notable trekking routes. When trekking in Bhutan it is always recommended to take a detailed map with you as many trekking paths intersect other routes and it can often be quite easy to get lost.

The three main treks are all in the western area of Bhutan where the majority of tall mountains lie. The Snowman Trek is undoubtedly one of the world’s great treks! Often described as the most difficult trek on earth, the Snowman Trek winds its way along the mountain border between Bhutan and Tibet.

The trek generally takes 25 days and begins in the airport city of Paro and concludes in Lunana in northern region of Bhutan.

The Snowman Trek is famous for its high mountain passes and trekkers will need to cross 11 of these to complete the grueling journey. Not only this, but 4 of the 11 passes are over 5,000 meters in altitude! The highest of these passes is Rinchenzoe La which stands at 5,332 meters.

The Snowman Trek is famously beautiful and you’ll be exploring a region unlike any other! Ideally, the Snowman Trek should only be attempted by experienced hikers who want a real challenge.  The trek is both long and often strenuous. You should be well acclimatized to altitude and have a good level of fitness to attempt this trek.

The Snowman Trek can only be attempted in summer as winter snows cover most of the high passes along the route. Click here for more information and a detailed itinerary. One of the most famous and popular trekking routes in Bhutan, the Chomolhari Trek takes hikers off the beaten path to experience the real authentic side of Bhutan.

Sitting on the border between Bhutan and Tibet, Mount Chomolhari is often refereed to as the “Bride of Kangchenjunga”.

Most notable for its huge sheer vertical relief that rises sharply on the mountain for 2700 metres, Mount Chomolhari is one of Bhutan’s most sacred mountains. One of the highlights of the trek is being able to camp the night at Chomolhari’s base camp.

As can be expected in this region, the Chomolhari Trek boasts outstanding views throughout and hikers cross over several passes over 4,500 meters! If you’re new to multi-day treks or simply want a nice introductory trek to Bhutan then the Druk Path Trek is for you.

The Druk Path Trek starts in the airport city of Paro and trekkers hike over a small, but beautiful mountain range before descending down into the neighboring valley where the capital city of Thimphu awaits.

Although not difficult, the Druk Path Trek does still reach a fair altitude of 4,200 metres (13776 ft) at Phume La Pass. Although you do not stay at this altitude for long, trekkers must still prepare for high altitude acclimatization. From the pass you get incredible views across the valley towards the highest un-climbed peak on earth – Mount Gangkar Puensum 7570m (24,836 feet). Many pro teams have attempted the peak but none have ever been successful. Climbing is now banned on the mountain.

Alpine forests and dwarf rhododendrons await trekkers high up in the mountain range and in spring the mountain range comes alive in colour! As you descend you come across several idyllic lakes where large trout can often be spotted. You then continue to descend down into Thimphu Valley where your trek ends. 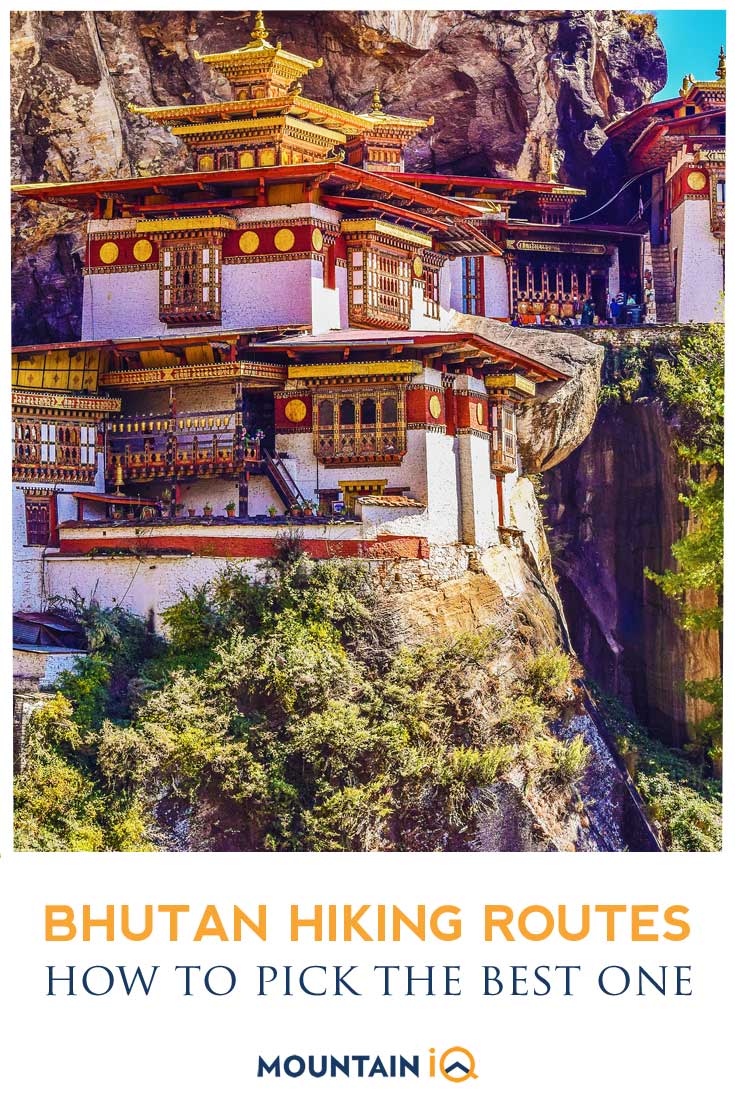