Best Hikes Near Seattle – Where To Find Epic Trails

Seattle, Washington is known in America for its easy access to nature and the outdoors, with many great hiking trails less than an hour away from the city.

See our list of the best hikes near Seattle for when you only have a few days and want to get out of the city.

Seattle is known for its proximity to the great outdoors, with some of Washington’s best hiking trails less than an hour away from Seattle.

Experience the beautiful forests, raging rivers and snow-capped mountains just outside the city. From the beautiful sea-side experience of Ebey’s Landing to the alpine beauty of Snow Lake.

Here is a list of the best hiking trails, ranging from easy to challenging, close to the city of Seattle.

The Rattlesnake Ledge hike is short, sweet and a mere 40-minute drive east of Seattle. The trail is a 4-mile roundtrip and begins on the shores of Lake Rattlesnake, which is also a great place to relax, swim and fish before or after your hike.

Although the trail has a steady incline, it is certainly not difficult. The easiness of the hike does mean, however, that the trail can often become crowded, especially on weekends and sunny, summer days. But not to worry, the incredible panoramic forested views of mountains and lakes makes dealing with other hikers worth it.

The 1160ft climb ends at a rock called Rattlesnake Ledge, which offers a spectacular viewing platform pointed east into the Southern Cascades. The well-maintained trail takes you past mossy boulders and exposed cliffs. Another perk is there are no parking fees or passes to worry about!

The hike up Mount Si is arguably the classic Seattle-area hike, mostly due to the mountain’s appearance in the opening credits of the original ‘Twin Peaks,’ and hosts more than 100 000 hikers each year. But don’t let its popularity fool you, the hike up Mount Si isn’t easy.

The trail is an 8-mile roundtrip and has an elevation gain of 3150ft and is a serious hike for serious hikers.

Most hikers stop at the base of the bald ‘haystack’ summit, while only the brave hike to the very top. Once at the top, you will be treated to the best mountain views in the Puget Sound region and a sweeping view of the Snoqualmie Valley. Mount Si is less than 45 minutes from downtown Seattle, however, you will need to purchase a Discover Pass.

Ebey’s Landing, perched on the western shore of Whidbey Island, is Washington’s favourite coastal hike and offers lovely views of the Olympic Mountains and the Strait of San Juan de Fuca.

The 5.6-mile roundtrip passes along the golden bluffs that tower above the surf of the Puget Sound, with excellent opportunities for wildlife watching, so keep your eyes peeled for bald eagles, seals and sealions with the occasional orca pod during the summer.

Toward the end of the bluff, the trail intersects the original and restored homestead from 1850 before zigzagging down the side of the cliff to the beautiful stony beach.

This mellow and easy hike offers some of the best hiking of the Puget Sound. Experience the windswept meadows and historic farmland on the picturesque Whidbey Island.

This trail is a little further out of the way from Seattle and requires you to take a short ferry ride to the island. Ebey’s landing is ideal for early morning and sunset hikes, although it can be hiked at any time.

One thing to consider though, is that you will nee to purchase a Discovery Pass.

4. Hike to the Poo Poo Point on Tiger Mountain

First things first, we need to acknowledge the hilarity of the name Poo Poo Point, the point was named after the sound of the steam whistles of old logging trains.

The hike to Poo Poo Point via the Chirico Trail, is yet another urban hiking gem. The 7.2-mile roundtrip hike begins in a big field just south of Issaquah, from there you will pass the carving of a winged lion and head up more than 1500ft of Tiger Mountain.

Those that manage to make it up the steep slopes will be rewarded with views of Lake Washington and the surrounding foothills at Poo Poo Point. This is also a location for a great launching ground for paragliders.

The Chirico Trail is short, however, that means you will be covering a 1500ft elevation in a short distance. You can also take the High School Trail, which is less steep than the Chirico Trail, but it is a longer trail.

The hike is of moderate difficulty and offers spectacular views in all directions on a good day.

Mailbox Peak was named due to the presence of a mailbox at its summit, which is maintained by volunteers. The mailbox, which is covered in stickers, is a place where hikers leave goodies for the next hikers, so feel free to leave an item and take an item.

This is a challenging hike for experienced hikers. There are two trails to choose from; the infamous Old Trail and the newer New Trail.

The New Trail begins at a popular trailhead, Northbend, and after crossing several creeks you will begin the difficult upwards climb through a series of switchbacks. You will gain about 850ft per mile hiked, but don’t worry, the mountain panoramas make the strenuous climb worth it. This trail is safer than the Old Trail and is more frequently used.

Once again, you will have to purchase a Discovery Pass.

Hikers of all levels can agree that Snow Lake is one of the best hikes near Seattle.

Snow Lake is one of only a handful of easy-to-access Cascade Mountain alpine lakes. This draws hikers from around the world.

The 7.2-mile roundtrip begins at the Alpental Ski area parking lot and meanders though a forest for about a mile, before the trail opens up with views of the jagged Chair Peak in the distance. The gorgeous hike continues down to the lake with steep mountain walls and waterfalls around.

This moderately challenging hike is only an hour drive from Seattle. We suggest you embark on the hike early on a weekday if you’re looking for some peace and quiet.

Another huge plus, is that the lake is usually one of the last places to be free from snow, which makes it ideal for a hot summer’s day hike. Unfortunately, the trail is closed in winter, due to the risk of avalanches.

Don’t forget to purchase your Northwest Forest Pass in order to enjoy this incredible hike. 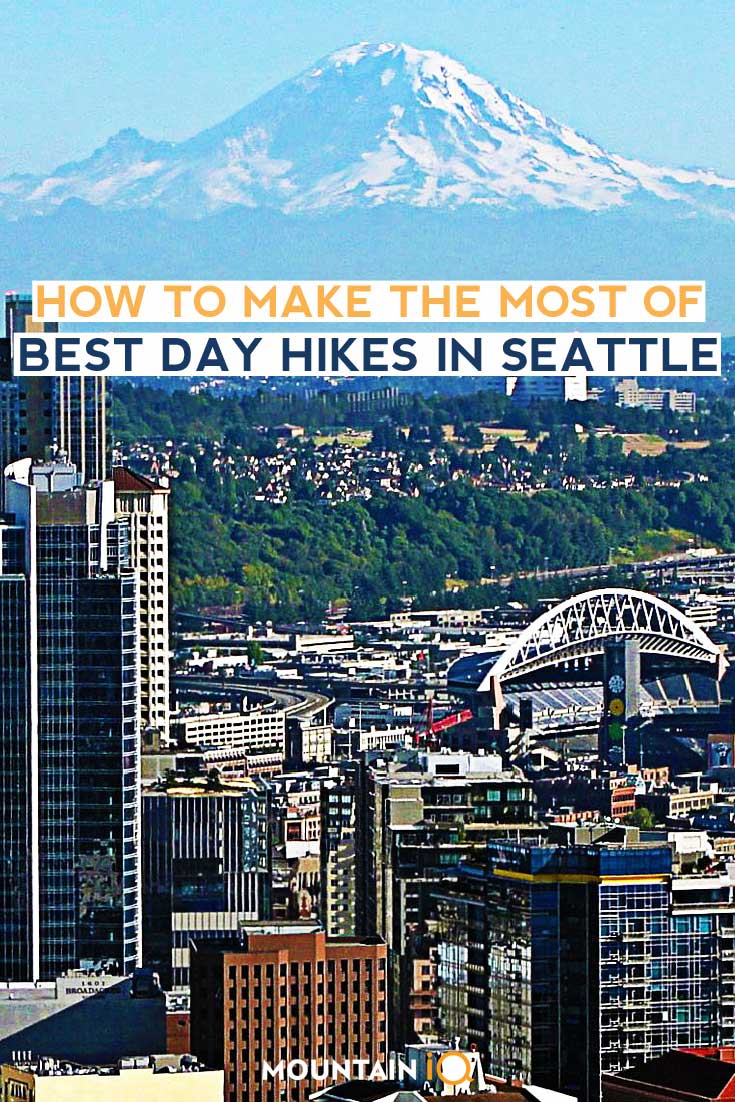