Acadia has over 120 miles of hiking paths that wind through the park. The hikes cater to anyone as they vary from very easy beach side strolls to strenuous mountaineering adventures.

See Best hikes in America for a complete list of hiking trails in the USA or read our writer's overview of her summit experience on the Mount Katahdin and her treks along the Cutler Coast.

Acadia National Park is one of America’s oldest national parks and attracts over 3.3 million visitors each year.

The park is reserves most of Mount Desert Island, some of the smaller islands along the coast of Marine and a section of the Schoodic Peninsula on the mainland.

With over 45 miles of roads and 130 miles of hiking trails to explore, hiking and cycling are two of the park's most popular activities.

The park encompasses a diverse variety of landscapes, including woodlands, mountains, coastline and lakes.

There are 26 peaks in the park, the tallest being the Cadillac Mountain which is also the highest point on the US Atlantic coast. The park's landscape is a result of massive geological forces slowly and persistently forming what can be seen today.

The granite domes in Acadia are estimated to be approximately 420 million years old, and mountains, such as the Cadillac, bare testament to this. Many of these mountains form part of the many miles of hiking trails that the park offers.

Due to its diverse landscape and topography, the park is home to a variety of wildlife and plants. There are over 1,500 species of plants, birds and animals; and the park has nature centres where you can learn more about the resident wildlife.

The park is especially well known for its birds, with a record of 338 species recorded. Each year, some of the parks trails are closed to accommodate nesting Peregrine Falcons.

Acadia has something for everyone as the trails vary in difficulty - from very easy family strolls along the coast line, to strenuous climbs up the many peaks in the park.

Meaning that the majority of the park is explorable via trail. Due to the vast number of visitors received each year, the park authorities are quite firm about their ‘leave no trace’ ethic.

Acadia is one of the few parks that allows dogs on trails, however, they have to be kept on a leash at all times and are not permitted on ladder trails. 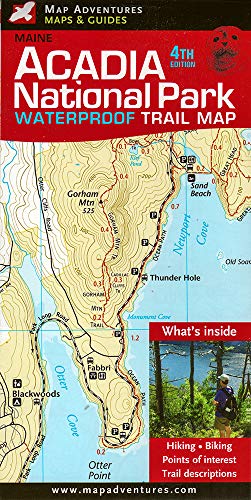 There are many free maps available on the area. The park can be divided into three areas: Schoodic Peninsula, The Isle of Au Haut and the Mount Desert Island.

But if you need to prep your route in advance and have a trusty physical copy with you while you are on the trails, we suggest getting Acadia National Park Waterproof Trail Map, Maine by Jill Keefe, which is waterproof and very handy en route.

You won't require hiking permits for any of the listed hikes below, these will be covered by your park entrance fees. But have a look at the National Park Service's website for more information on specific activity permits. While on the Precipice Trail, wooden bridges and iron handrails allow hikers to traverse narrow, exposed ledges, making it easier to scramble over boulders and other natural obstacles.

As you hike straight up the cliff face, the iron handrails and ladders will become more frequent. Upon reaching the summit of Mount Champlain you will be rewarded with impressive views of the ocean and Dorr Mountain.

The trail can be dangerous, so it's better t avoid descending the Precipice Trail and rather return on the Champlain North Ridge Trail. The return trip to trail parking lot is a breeze in comparison to the hike up.

Watch the Bazzle family’s video to get a good idea of the vertical climb and incredible views that the Precipice Trail offers. Wonderland Trail runs at the Southern Tip of Mount Desert Island. Leading to the ocean via an old road, the trail is very flat and easy to follow. When the road reaches the ocean you might want to venture off the trek and explore the rocky shore line instead.

With its magnificent woodlands and rocky beaches, Wonderland Trail is great for birdwatching enthusiasts and families in particular.

This brief video by National Park Adventures takes you along the scenic Wonderland Trail. The Beehive Trail begins on the Bowl Trail, however, the path splits and the Beehive continues to the base of the Beehive Mountain. Here the trail works its way up breaks and faults in the granite. The exhilarating first section of the trail has iron rungs to help you ascend the steep cliff face. There is a fair amount of scrambling involved, but the incredible view at the top makes it worth it.

The descent climb is much easier, and you have the choice of returning through a deciduous forest to the Bowl Trail, or via the longer Gorham Mountain Trails and Ocean Path back to Sand Beach. Descending the Beehive is dangerous and not recommended.

To get a better feel of this  hike, check out the BustedKnuckleVideo. It gives you a good idea of the incredible views and steep mountain side path. The Ocean Path begins near Sand Beach and is less than half a mile from the park’s entrance. The hike is a leisurely stroll along the path hugging the coast line.

Several trails lead off the main trail, so if you are feeling adventurous you could stray off the path and explore the surrounding granite formations.

The trail is home to many beautiful landmarks, and it's worth spending some time viewing these. Thunder Hole, Momentum Cave and Boulder Beach are all popular tourist stopping points.

Watch this video by David Kuklinski to get a better idea of the beautiful ocean front hike that that can be expected. The Ship Harbour is a family friendly, figure 8 loop trail which allows exploration of both a beautiful forest section and the shoreline. The route is popular with bird watchers, as both the forest and the coast, are home to a variety of bird life.

If you would like to extend your hike it is possible to continue along the shore line towards the Wonderland Trail.

This peaceful video by Bar Harbour Acadia gives you a good overview of the Ship Harbour Trail. 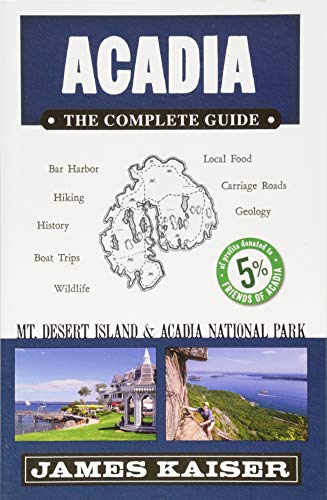 What Travel Insurance Do I need for Acadia Hikes?

Hiking insurance is not a mandatory requirement for hikes in Acadia National Park, but in general we recommend having insurance.

When is the best time to visit Acadia?

The best time to visit the park is from September to early October. This time is best to avoid the summer crowds but is just prior to the temperature dropping below freezing.

July to August is when the weather is best but it is when Acadia is most crowded.

Do I need a reservation to go on an Acadia hike?

All park visitors are required to pay entrance upon entry from May to October. Passes can be bought and printed online.

How much are Acadia entrance fees?

See the below pass prices, valid for 7 days:

The hikes vary from very easy to fairly strenuous and technical. However, they are a variety of hikes that accommodate all abilities – some even being wheelchair friendly.

Not really – altitude sickness only becomes a concern when reaching altitudes of 8,000 feet or gaining over 3,000 feet in one day.

The hikes in Acadia vary in difficulty and terrain. This means that the gear you need will depend on the type of hiking you are planning on doing and what time of year you are going.

However, it is always important to bring plenty of food and water, as well as sun protection, no matter which route you pick. You can never go wrong with a good pair of hiking boots and a headlamp, just in case you underestimate how long the hike may take you.

To help you plan and prepare for your hike, we recommend reading our gear section and Packing list.

What wildlife can I see in Acadia?

Acadia is home to a variety of wildlife. You can expect to see Puffins, Peregrine Falcons and a variety of sea birds and song birds.

The park is also home to otters, foxes, deer and the occasional moose and bear (but sightings are very rare). Whales and seals can sometimes be spotted from the parks coastline.

Do you need a car when visiting the park?

The island has a transportation service called the Island Explorer. The service is made up of nine bus routes which link campgrounds, hotels, in-town-shops and inns with destinations in the park and nearby villages.

What is the travel distance to the park from Boston or Bangor?

Where can I eat out in the park?

Jordan Pond House Restaurant is the only dining facility in the park, however, many dining options are available in nearby communities.

What are the opening hours of the park?

The park is open 24 hours a day, every day of the year. However, certain sections and roads in the park are closed depending on the season.